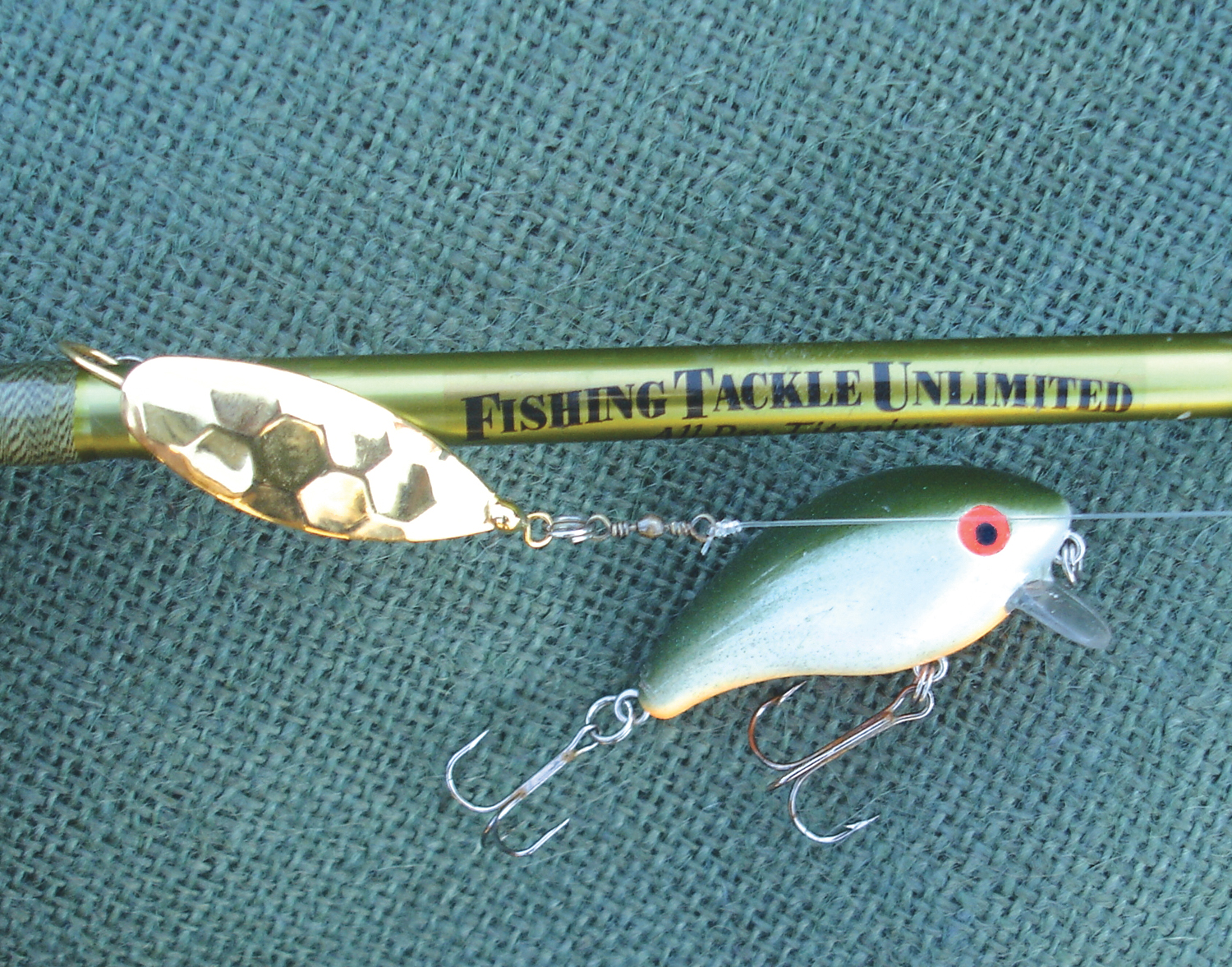 T he time-honored 1/8 ounce weedless spoon and Mann’s Baby 1-Minus have been racking up lots of redfish lately.
To re-cap the past month or so, fishing in the lower Laguna Madre has been very consistent consistently good or consistently tough! One day you're on 'em and the next day you'd swear that there wasn't a big fish within fifty miles. Such is nature though, and the daily challenge is what makes fishing the worthwhile pastime it is. When things went our way, tangling with our world famous brute-shouldered redfish was no less than awesome. Who can't get excited watching schools numbering in the hundreds aggressively work their way towards you? There were several savored moments when the entire water column would vibrate with their drumming, and we would shake too waiting for them to get within casting range.

A common mistake when adrenaline is high is blasting into or casting directly into these schools. As tempting as it is, this is not usually the best option. Often, the first hook-up will scatter the entire school and your partners will get a fleeting shot at best. Approach quietly and try to stay with them as long as possible. One way is to ease in and pick off single fish from the edges. A simple plastic tail works fine here, as does a spoon, but at times topwaters can cause a mad rush of whitewater as they compete with each other. As these fish bunch up more consistently, and they will through November, they can offer some of the most thrilling, drag chattering experiences the Laguna is famous for. I love big trout as much as anybody but big redfish have been much more realistic targets lately, so go with the best nature has to offer for the moment and enjoy every bit of it.

During September the overall water level rose more than one foot. That is big considering our average depth is only two and one half feet and the rise in water level gave both bait and predators a lot of water to use. The winds during the later part of the month and into early October basically went slack until late afternoons. Without appreciable current from the Gulf, we rely on wind to move water and when it doesn't move, all life becomes sluggish, including many scorched fishermen. What we found however, and it makes sense, is that during many of those dead calm days some good fish were consistently found holding in shallow, heavy grass. In theory, the oxygen content would be higher there because of the grass. A little 1/8th oz. weedless gold spoon, and even small topwaters, saved several days in otherwise tough conditions. You wouldn't even see these fish as they were buried deep in the grass, but going on faith is also a lot of what fishing with lures is about. No matter what the conditions are, the fish are somewhere. If the signs are good, believe they are there, and get in there and catch them!

Another dilemma we encountered was that the water went off-color in many areas. Cries of brown tide were common. However, the water, at least here, was not brown but more of a soupy green. There have been no reports of true brown tide from TP&W, and what allegedly occurred was estuarine eutrophication, basically caused from a heavy nutrient. Heavy rainfall, combined with high temperatures and low winds, evidently encouraged other types of nuisance algal blooms besides brown tide. There is a lot of information about this on the internet if anyone is interested. As of this writing patches still exist, but it not as widespread and there is plenty of clear water available.

Back to days without even a breath of air until late afternoon. There were smaller slot redfish on the sand early which provided a lot of sightcasting fun, but aside from finding some good fish buried in heavy shallow grass, the biggest bruisers were often out deeper in waist to shirt pocket water. We found many of them cruising just beneath the surface during those windless periods. If your presentation was too low you missed them all. The Mann's Baby Minus One worked very well in this situation as it stays less than a foot deep. So did little 1/8th oz. spoons and some topwaters, even during the hottest part of the day.

The bull tides of fall should be peaking about the time this issue hits the rack, and will continue slowly falling into the first part of February. When the levels first start to recede, we will see a mass exodus of shrimp leaving the back sloughs and marshes, and both trout and reds will be eagerly waiting to intercept them. We will be there too, watching for low birds hovering over pods of tailing reds and throwing Corkies along the current-swept drops. It will be also be time for bigger topwaters, and the highest anticipation will be wondering what sort of beast will slam the next cast.

Last year we started catching our magnum sized trout in mid-November, so no need to wait until the mythical months of January and February to hunt for your personal best. Lower tides, cooler water, and revolving winds will make those little tidal dumps much more special. Fish will be more concentrated, much easier to pattern, fatter, and just plain meaner as the year works toward it's close. Your standard techniques will apply, but the biggest factor in success will be getting into the water to do what you dream of. You're dreaming of it right now, so am I, and I can't wait to stuff my new Simms waders full of Corkies. The challenge will be there, will you?