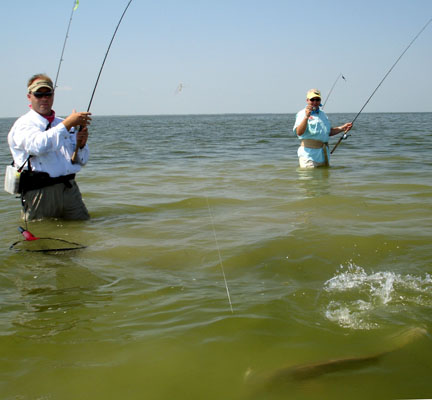 Thigh deep grass beds at midday have been producing consistently.
First of all, our hearts go out to all of those impacted by Hurricane Ike. Although we escaped such catastrophic destruction from Dolly, folks here in South Texas can still identify with some of the difficult tasks lying ahead. As a word of encouragement, remember that even this too shall pass. When it finally does, the great outdoors will be waiting and fishing will help put all things back into perspective. We are fortunate here. Everything is back to normal and fishing just simply exploded in recent weeks, better than we have seen for quite some time.

At this writing, there are still areas holding scummy-looking water but overall conditions are just fine.  Ike’s surge followed by fall equinox tides helped to clean things up and sparked a lot of movement. The shallows literally came alive with activity and cooler temperatures have kept fish shallower longer into the day. Some of our best catches have been coming off hard sand early and then moving out to thigh deep grass beds towards midday. We have been doing well with full size Skitter Walk surface plugs and my favorites have been the HCH (hot chartreuse) and ST (speckled trout.)

Other welcome news is that our trout seem to be putting on weight early this year; twenty four inch trout are weighing four pounds and a twenty six will weigh six. We are seeing good numbers of trout over twenty inches and a surprising percentage running in the twenty three to twenty five inch range. Based on recent observations I am predicting many heavyweight battles will be fought this winter.

Redfish action has been outstanding. In just a few weeks we should be seeing tightly packed schools on the flats. Usually by mid October and continuing in November they begin easing their way towards gulf passes. Most of our better reds lately have come on topwaters and the strikes have been nothing short of violent!

We were blessed with very low winds early in October. With a calm surface most of the day, it was amazing to see how much life is really out there. Wakes from scattering bait, reds and trout were almost everywhere you looked during the early morning hours. However, calm water can also make surface plugging difficult at times, so it can often take a lot of teasing to get fish to commit. It’s extremely important to keep your eye on the plug at all times, carefully watching for any sign that a fish might be eyeing it as a potential meal. The signs are often subtle and may just be a small hump behind the lure or baitfish scurrying to the side, spooked by the approaching predator. When you think a fish is on it but won’t commit, vary the retrieve. Sometimes simply stopping for a second and then continuing with erratic motions will get it. Speed it up, slow it down, whatever it takes, but taking a fish from being merely interested to becoming violent on the surface is one of the most exciting things you can do with a lure.

Besides watching your lure, keep an eye out for other activity to address with your next cast. Always try to throw at something, a wake, a swirl, a flipping baitfish; all of these will improve your catching. In this game the eyes do indeed have it.

Predictions for next month’s fishing can never be certain but things do look encouraging. Topwaters should continue to call up excellent fish as we focus daily on the ranch shorelines. When you see active bait, eliminate water from shallow to deep until you find the depth that offers the most bites and then stay there. Find the structure most fish are holding on and you’ve got ‘em until conditions change. If the fish are not exactly with the bait they should still be nearby. There will be opportunity everywhere in November, from flats to shorelines to backwater areas. It’s just a matter of getting out there and interpreting nature.

Strong winds during northers may be uncomfortable but that’s not all bad. The Laguna generally needs a good wind to create current, plus it pushes fish to predictable areas as levels change. A simple rule is to target depressions and guts when the wind empties flats, and then concentrate further into back areas when water gets pushed into them.

Now is a good time to get your winter gear in order if it’s not already. Yes, conditions can get uncomfortable, but they are also easily overcome with the right stuff. For me the right stuff is made by Simms. Their G4 wading jacket along with WaderWick fleece pants and tops have tamed even the worst of conditions on the water for me. Whatever you choose, choose wisely, and your precious time on the water will be much better spent.