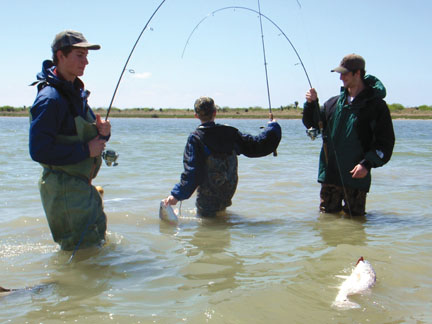 November is the month to call in sick if you can.
Once again, I am happy to report that the fishery in the Lower Laguna Madre is quite healthy. We're having a blast down here on the flats, and as good as the fishing has been; we can only assume that November is going to be awesome.

During September our redfish started grouping in force both on the flats and towards the jetties. We had a long stretch of low wind days, and at times you could see several pushes of water from hundreds of yards away from large schools of upper-slot to well-oversized reds. Unfortunately, boat traffic often made them hard to get on, as many wanted to ram these schools to cast into them on a "one shot" deal as they were fleeing. A much better approach when you see these herds is to troll, drift, or pole into them so they stay together. What we do is make a wide circle and try to predict their path, then drift close and get out and wade into them. Walking with these schools can be awesome and at times you can stay with them for long periods. Never discount the larger trout that can be with them either!

Trout have remained numerous over deep grassbeds, but the typically smaller fish of the hotter months are slowly giving way to the heavier weights of fall. Topwaters are becoming more consistent and so is shallower water. Several changes have occurred since our last report which may have something to do with it. The area finally received much needed rainfall, the overall water level has risen about ten inches, and an early norther seemed to kick off fall patterns a tad early. Each one of these events happened fairly close together, and although the fish at first seemed confused and absent, patterns quickly came back around to being even more predictable.

With the increase in water levels a lot of areas came back into play that we haven't been able to work in months. Backwater areas quickly filled with both reds and trout and the baitfish became thick in much of the shallows. The early norther coupled with the rain must have spurred bait movement, as small shrimp and crab have trumped other forage according to stomach content surveys. That being said, good old pumpkinseed/chartreuse has been my soft plastic confidence color. If I'm not throwing a Brown Lure Devil Eye on an 1/8 ounce head, it's going to be the large Kelly Wiggler paddle tail. In fact, the paddle tail seems to excel when these fish are rooting up small crabs and you need a shallow, flat retrieve. Especially for the novice, the swimming action is a no brainer and quite easy to control in a thin margin of water. As far as topwaters, nothing much has changed from the proven She Dogs [or She Pups] and SkitterWalks. Big when it's choppy, smaller when it's calm, and chrome with green seems to work as well as anything in this grass-laden wonderland. Most of our better fish have been coming from the shallow potholes early, then from the deeper color changes later in the day. With the presence of baitfish in either of these areas, you can be sure that some of the fish you want to catch are there as well.

November means pure excitement if it's anything like last year, and by all accounts it should be. It's going to be all about timing between the northers and fluctuating water levels than it will be about temperature. Before northers, look for activity where strong south winds have drained certain areas into the next level drop, and afterwards, look for increased action in areas the north winds have flooded. We don't have much tidal flow here, so these revolving winds really get things going by moving water and should be one of your first considerations about where to start your day. Always watch your baitfish. The pelicans will be one of the best indicators if the bait is not active on the surface. The white pelicans have already begun arriving here and will soon be some of your best friends. Last year, November was one of the best months we had on both numbers and big trout, plus the redfish action in the shallows could only be described as brutal. If you are a serious fisherman, November is a great time to head to Port Mansfield.