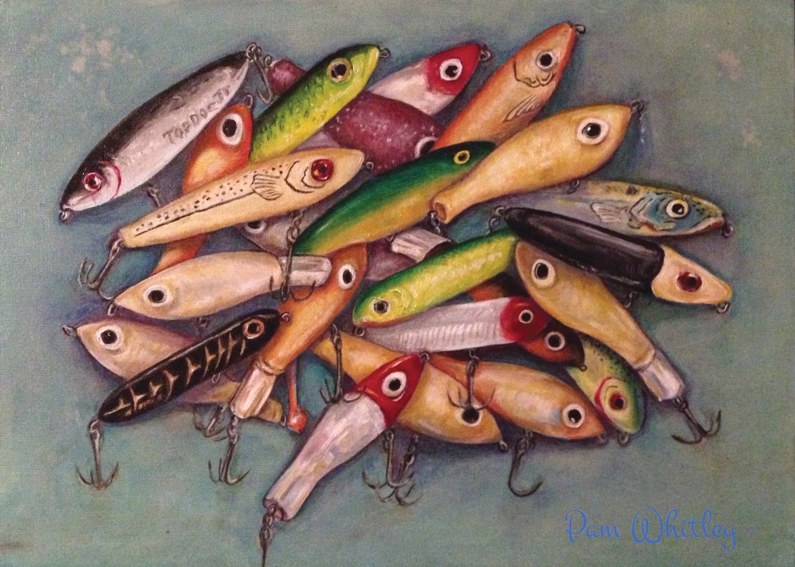 I was replacing hooks on a bunch of lures when my sister snapped a photo and painted this for me. Now how cool is that?

It really is easy to fall in love with fall fishing on the Lower Laguna Madre. November is when Port returns to its famous laid back atmosphere but, on the water, everything becomes intensely exciting just beyond the harbor. We can expect a lot of water to ourselves. And who can argue with deserted flats, deer and nilgai numerous along the shorelines, coyotes yipping and fish smashing practically any lure you want to throw? The season is changing and fishing here has made its fall turn. As of this writing we are already seeing much of what we wait for all year.

Unfortunately, also as of this writing, the lower Texas coast is experiencing a red tide outbreak. There has been a substantial fish kill, mostly along the Gulf beaches and nearshoresome limited red tide has been in the bays from Port Aransas to Boca Chica. It reminds me of the red tide event that occurred in 2005, and fortunately there is plenty of the Laguna not affected at this time. It is already dissipating and even though I'm no expert, I expect it should be completely gone in a few weeks. Fishing is very good at present and by the time November comes I believe it will be great overall.

Late in September the water level rose more than one foot. That is big considering our average depth is only two and one half feet. The overall rise in the water level gave both bait and predators a lot of water to use. The winds during the latter part of the month and into early October basically went slack until late afternoon. Without appreciable current from the Gulf, we rely on wind to move water and when it doesn't move, all life becomes sluggish, including us.

What we found, and most always do, is that during those dead-calm late-summer days some good fish were consistently found staged in shallow, heavy grass. A tiny 1/8 ounce weedless gold spoon and small topwaters saved several days in otherwise tough conditions. You often cannot see the fish when they are buried deep in the grass, but going on faith and experience is a whole lot of what fishing with lures is about. There were also lower-slot redfish on the sand early, which provided sight-casting fun, but aside from finding some good fish buried in heavy shallow grass, the biggest bruisers were more often out deeper in waist to shirt-pocket water. We found many cruising just beneath the surface during those periods. If your presentation was too low you missed them all.

The Mann's Baby 1-Minus and Paul Brown's Soft-Dine worked very well in this situation as they both tend to stay less than a foot deep. Predictions for this month's fishing can never be certain but things do look encouraging. Topwaters should continue to call up excellent fish. When you see active bait, eliminate water from shallow-to-deep until you find the depth that offers the most bites – and stay there. Find the structure most fish are holding on and you've got them in that location and others that are similar until conditions change. If the fish are not exactly with the bait they should still be nearby. There will be opportunity everywhere in November, from flats to shorelines to backwater areas.

We'll see some strong south wind as fronts approach and strong north winds as they arrive and cross into the Gulf, but this is not all a bad thing. As stated above, the Laguna needs wind to generate water currents, plus it pushes fish to predictable areas as levels change. A basic rule is to target depressions and guts when the wind empties the flats, and then concentrate further into back bays when the south wind returns and brings the water with it.

Last year we started to catch steady numbers of better trout in mid-November, so no need to wait until the mythical winter months to hunt for your personal best. Lower tides, cooler water, and heavy wind switches will make those little tidal dumps more special. Fish will be more concentrated, fatter, and meaner as the year nears it close. Our standard techniques will apply, but the biggest factor in consistent success is getting in the water with them. I can't wait to stuff my Simms wader pocket full of Corkys and topwaters. How about you?