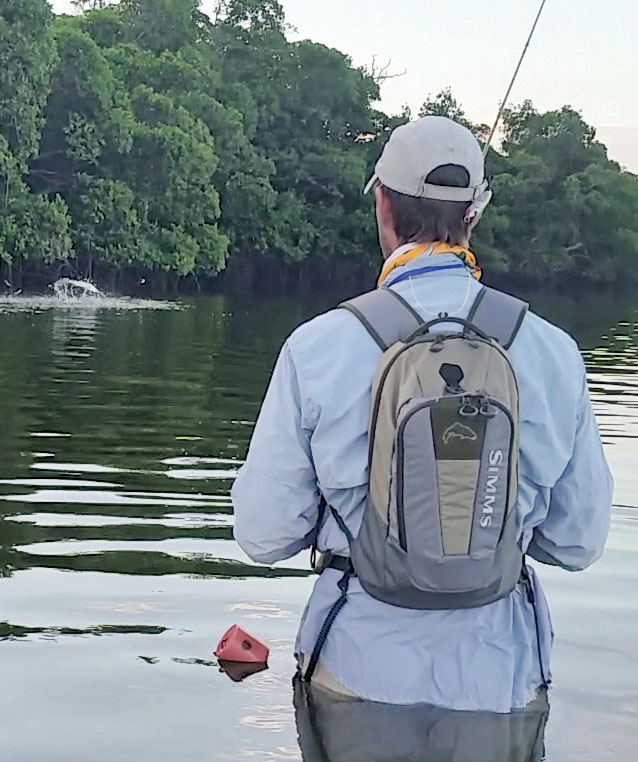 Florida snook busting mullet in the shadow of mangroves.

All is well in Port Mansfield, no sign of red tide yet, despite the chatter you might have seen on social media. I do not anticipate any red tide issues as we move further into fall, but Mother Nature is still Mother Nature so keep your fingers crossed.

As I mentioned last month we have begun to see the first signs of fall. Northerly breezes feel awesome with less humidity, and that cool air puts a little more spring in your step.

Captain Ernest Cisneros and I recently traveled to Florida for an event that included guides from around the country. Costa Sunglasses, Yeti Coolers, Simms Fishing and many more help put this event together each year and make it a huge success. The focus of the Slack Tide Guide Event was conservation of our fishing resources (catch and release) and limited use of plastic water bottles that linger nearly forever to degrade habitat.

We had the opportunity to wadefish "eastern" waters near Jensen Beach and St. Lucie Inlet for all the species we are used to seeing here. Topwaters and soft plastics produced snook, reds, jacks, and even two bonefish. Believe it or not I even got a barracuda on soft plastic. Having said all that I still wouldn't trade what we have right here at home.

I experienced some great fishing and thoroughly enjoyed the experience from brackish backwaters to gin-clear flats, similar to what we are used to in the Lower Laguna, but I still believe we have a better fishery. Bias? Maybe, but with the similarities to the Laguna Madre I was able to relate it pretty closely to our bay system. A barrier island blocks the Atlantic (Gulf for us), mainland to the west, miles and miles of wide open bay stretching north and south. Ernest and I had some serious conversation about this and we agreed that our Mother Laguna is a more pristine and prolific fishery.

Catch and release is common practice in Florida. As we were heading in one afternoon after wading crystal-clear water, I chatted with a local guide about his clients and whether they keep many fish. He seemed somewhat puzzled, stating that if his clients wanted to keep fish he wouldn't even know where to start looking for his filet knives.

Something to learn from this? Absolutely. Let's face it, we have all held stringers high over our heads, over our shoulders and spread over the deck of a Shallow Sport. Great at the time, no doubt, high fives flying and all that. However, after experiencing another perspective, maybe we should consider more catch and release. Something to think about. This Florida trip really opened my eyes.

Now for some Port Mansfield fishing. As of this writing the water temperature has dropped about three degrees which has triggered some activity in the bays. The fishing has been good, the water is still on the high side and the fish are currently staging in the normal areas. Reds have been found in pretty good numbers near East Cut along with some big trout. Our flounder have been holding along the drains and sand flats, also near East Cut. We are still catching some nice flatties way up north and even some south. I will say if you have a group of four or five wading near East Cut its highly likely someone will nab a flounder or two.

We have been getting an early start, and it sure seems easier these days with the sunrise coming almost an hour later than a couple months ago. Topwater action has been very good before the sun breaks the horizon. We recently connected with a solid eight-plus trout just before sunrise. How awesome is that?

When the surface bite tapers off we have been fishing Ball Tail Shads and 4-inch paddletails with a variety of colors producing very well; notably Mansfield Margarita, Flo Mingo and Olive Red Metal Flake/Chartreuse. Lighter jigheads seem the best setup, the new 1/16 ounce 2/0 spring locks have been very good for us. With lighter jigs you can keep any plastic in the strike zone longer and out of the grass. The fish seem to be holding in greatest numbers in knee- to thigh-deep water as of late, over lots of grass.

Hope you all have a Happy Thanksgiving. My buddy calls this time of year "Nocember" as with holidays in both November and December they just seem to run together.

Stay safe out there and be courteous to your fellow anglers.