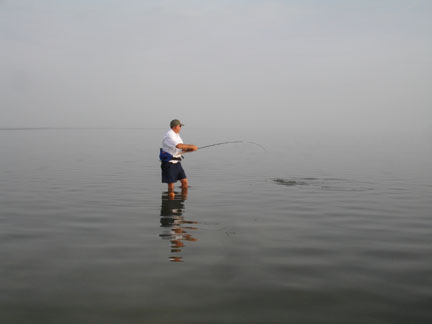 On the clear, shallow flats you earn every pull.
There is little argument that a hurricane can mess up your fishing. We all hoped recovery would be quick and our normal late-summer patterns would still work; unfortunately this was not the case. Heavy rain that fell inland continued to drain from the Arroyo Colorado and the surrounding ranchland. A lot of prime water remained horribly stained and shredded grass on the surface remained a major problem throughout the system well into September. Areas we normally depend on proved inconsistent for several weeks prompting the move to the eastside flats; areas we do not frequent much at this time of year.

Working skinny water is not for everybody, nor is it the easiest to teach to novices or those used to blind casting to structure. Action can often be sporadic, which means it can take extra effort to earn a pull. Still, it's one of the best experiences the Laguna has to offer and I'm glad to have been driven back there to enjoy what I have been missing.

Late August and early September saw many days with very light winds, so wakes from fleeing fish could clearly be seen while running the early morning flats. The cool sandy bottoms would be alive with both baitfish and predators, but after the boat wash settled, they became very hard to see, especially for the uninitiated and anyone not wearing quality fishing glasses. Blind casting can certainly work, but the most successful anglers can identify subtle targets and make the required accurate casts and these are the prime elements of sightfishing.

"I just don't see what you see Captain" is a common lament, but once you know what you are looking for things become more obvious.

Sightcasting does not always mean throwing to a visible fish, so it's crucial to stay alert and give every small movement a chance to be a fish. Finding something to throw at on each cast makes a huge difference, and casting distance becomes even more important where shallow fish are easily spooked. As much as I love a 6'6" rod, I am recently relying on my 6' 9" APXL1 by Fishing Tackle Unlimited when those few extra feet count. I have also been very excited about our Shimano Core reels. Paired with the FTU 6'9" green rod this combo makes for a very effective setup.

Finding good trout milling among the shallow reds was another pleasant surprise, but the abundance of baitfish had everything well fed and often hard to catch. One of the most fun and productive presentations was agitating them into taking a topwater. Something like a bone/silver Super Spook Jr. was usually all you needed, but at times a full-sized plug worked better even in less than shin deep.

Presentation was more important than size and those who could see a fish was under their plug could often get it to explode by enticing with repeated stops and starts. Tails also worked but the surface action was too good to pass and the plugs stayed on the end of line much of the time.

Deeper grassy potholes were fairly consistent producers later in the day and best baits were again well-worked topwaters and of course tails and spoons. Plastic colors varied, but plum and rootbeer on 1/8 jigs did as well as anything. The East Cut has also been full of fish with the edges producing excellent trout as long as some current is moving. Flounder have been surprisingly numerous of late all over the bay.

Great things should happen in October. The water will continue to clear and the mats of displaced seagrass will someday find the shoreline. We seem to have lots of fish and hopefully more will move up shallow as the water begins to cool and autumn's higher tides roll in. Expect redfish to run tighter together and provide even better action as they group towards the passes. Tailing activity should increase in many areas, especially newly flooded backwaters, shorelines, and again, up high in the sand. Look for trout over deeper grassbeds along color changes and my guess is that the larger fish will be slamming big plugs longer into the day.

Given the generally reduced level of fishing pressure we have witnessed over the past several months our expectations are running high. Look for bait near thick cover adjacent to dropoffs, potholes and points along shorelines. Spoil banks and unmolested shallow areas in backwater regions should also be good producers along with the all the drains and sloughs.

On a side note, it appears that some dredging may finally occur at the mouth of our jetties as bids have been published. If so, spring tides may be quite a bit fuller next year. Let's all hope.

It won't be long before we pull out those breathable waders announcing the exciting start of big fish season.