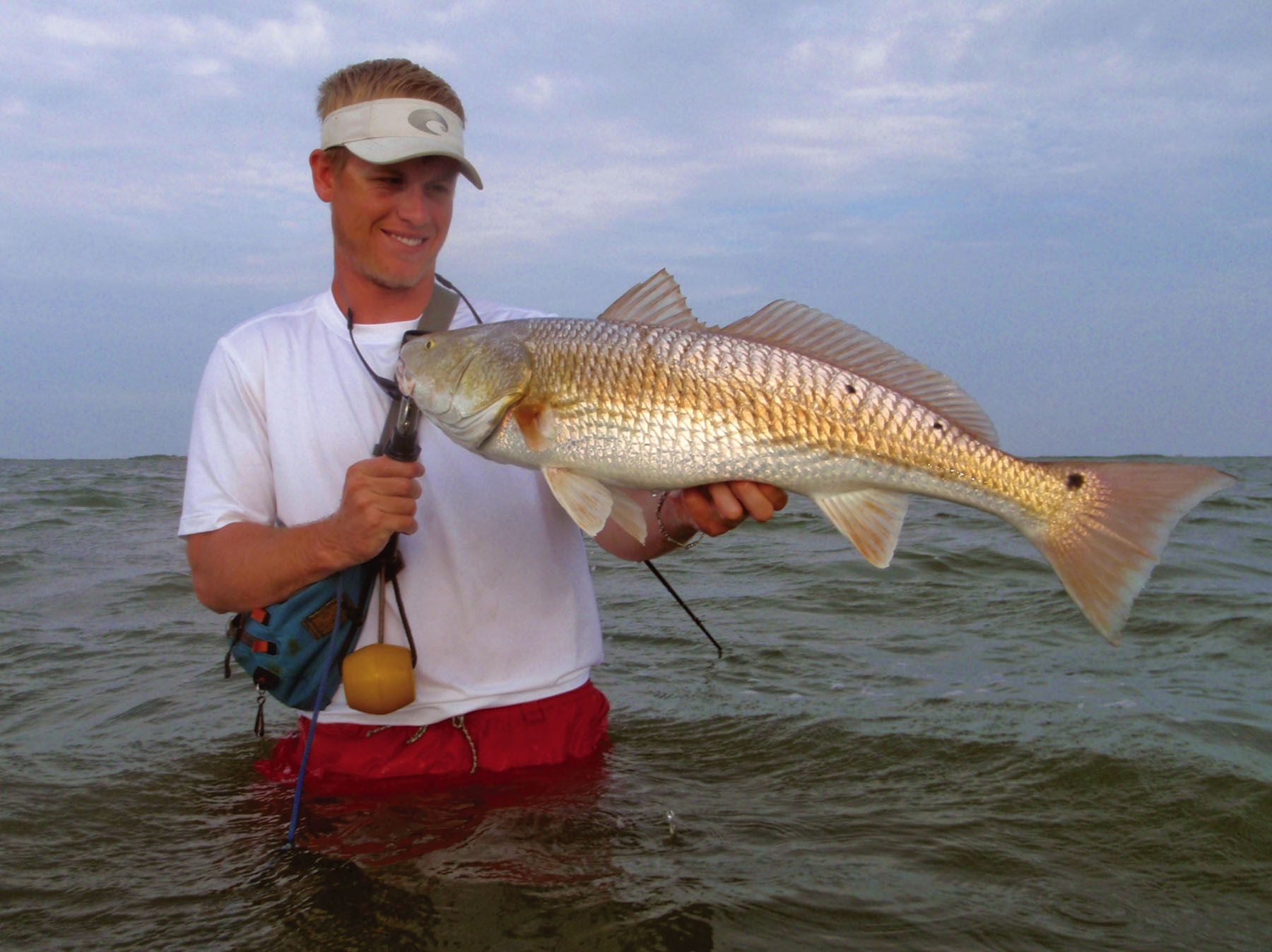 Reds have been holding deeper over thigh to waist deep grassbeds.
Late summer brought us many classic days of light wind and extreme heat, but we also had to deal with crazy water levels and unprecedented amounts of freshwater runoff. The unusual conditions posed a challenge, but fortunately it was mostly all good and often even better than expected with a little work. This fall has several markings of being excellent, so it's time to get those waders ready for the real deal.

There has been no shortage of small trout all summer. Almost every drop-off and deeper grass bed seemed to be loaded with undersized fish. Although there were some good topwater sessions during aggressive feeds, soft plastics on 1/8 ounce jigheads usually kept most folks busy. Limits for everybody were fairly common but you had to go through quite a few fish to make all of the legal marks. However, there were still some quality fish in the mix running in the five to seven pound range. There was really no secret to finding them as they were just all in there together, very common for summer.

Redfish mostly stayed out over thigh to waist deep grassbeds and sand pockets, especially after about mid-morning depending on cloud cover. There were a few occasions when good groups of them moved onto the shallow sand, but deeper was usually more consistent. I got lucky and won first place redfish during the Ladies Kingfish Tournament by staying out deeper where the bigger fish had been and just grinding it out with tails. We should see more consistent activity in the shallows during the next couple of months as they make their yearly move towards the Gulf passes, and personally I can't wait to walk into some of those exciting pods of waving tails. You can't beat the pull, and just the sight of them can take your breath away.

The biggest news has obviously been the extreme freshwater runoff, which eventually consumed almost the entire Laguna from the Island to the Land Cut. Virtually the whole west shoreline south of town was taken out of the equation, and we were left with very little water that was not horribly stained and sweet. Many areas we normally wade were just too deep and standard patterns simply went out of play. We all had to adapt, and thank Heaven I have awesome clients willing to experiment. Hunting for new signs of where fish may have moved was half of the fun, and it paid off more than once and in some big ways.

As always, we can't be afraid of dirty water. If there is a showing of baitfish, especially with birds nearby, chances are that fish are nearby as well. It seems that with this freshwater also came an unusual emergence of shrimp and crabs. Keying on slicks became the most obvious sign, and a major mistake many fishermen make is not taking advantage of what Nature is trying to tell us. Although all of the promising areas we checked didn't pay off, several of them turned out awesome as apparently large numbers of fish were concentrating in certain areas. When you found them you usually found a lot of themand some good ones too. It makes sense that a few of the better areas were near the East Cut, along upper shorelines, and off drops near the Intracoastal where it was saltier down low. Some of the back areas came alive as well when the tides finally dropped. You just had to go look and be willing to try new things.

As of this writing the runoff has finally stopped and water levels have returned to normal. It will take some time for the salinity to return to normal though, but if we are spared from any more tropical activity, this fall and winter should be quite exceptional. The last time we had a major freshwater event, after hurricane Dolly in 2008, both trout and reds stacked up near Port Mansfield in incredible numbers and size. Fishing was so good that it must have been like the old timers say it used to be. What I am looking forward to is after Labor Day when the crowds go back to civilization, when the fish return to the shallows, and life on the water becomes larger than life itself. We don't really know what the aftermath will be after such an historic event, but we are already seeing some great fish using some of the same areas they did during the fall of 2008. All things go through cycles, and here's looking forward to one of the better ones we've ever had.