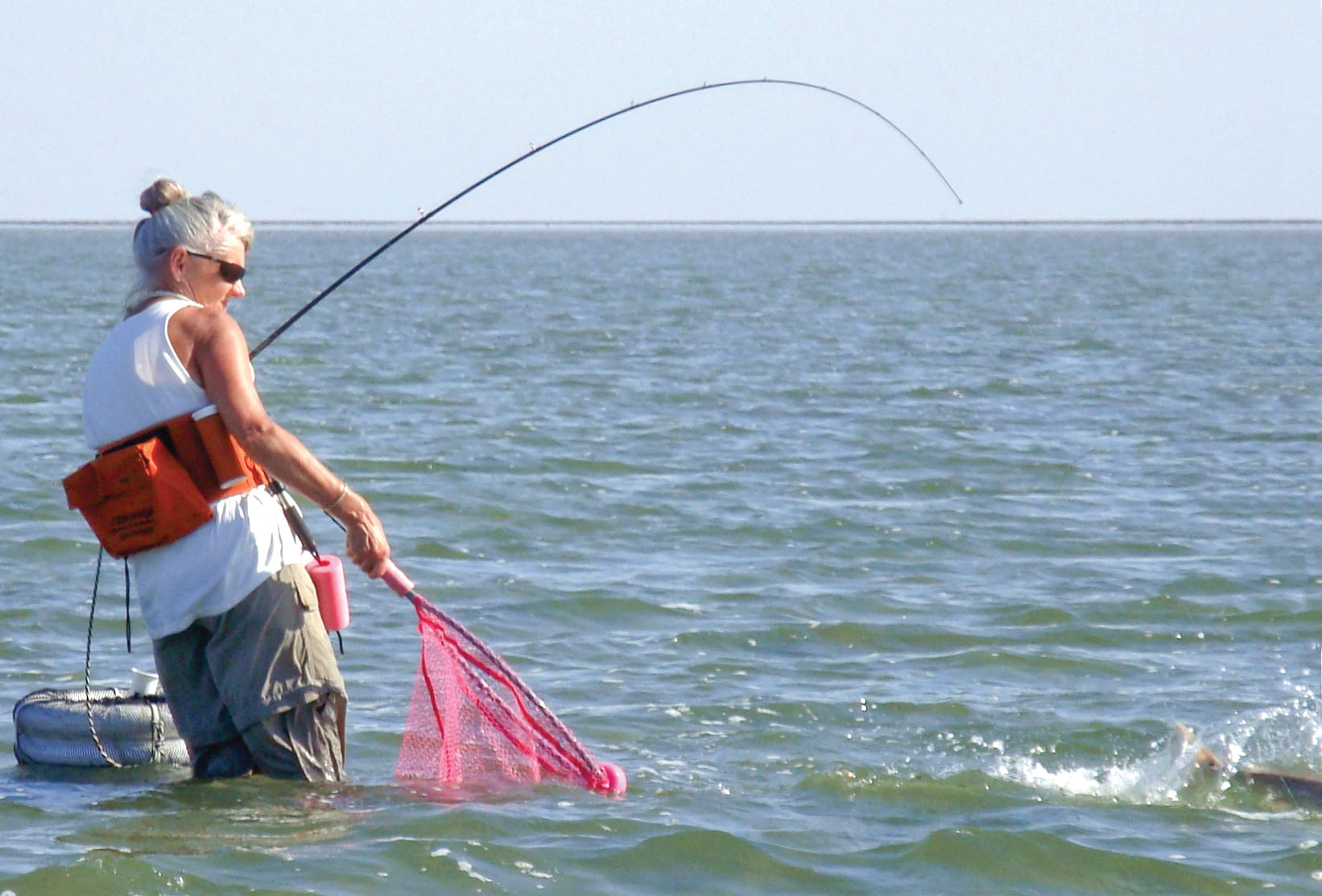 Joanie Hunt had a lot of fun with the redfish.

Little has changed since my last report. Late summer is always jalapeo hot down here and we could sure use some rain to sweeten the Laguna. Catching remains slow in general. We have had some decent days and a couple great ones but overall it remains well below average for Port Mansfield. October always brings change to South Texas and Im praying for pleasant autumn weather and consistent fishing patterns.

Seasoned anglers are all standing around scratching their heads. Fishing patterns taken for granted over the years just fell apart this summer. It has certainly been a different year. The live bait folks have been bringing in decent numbers of pretty solid trout but none of us have a clue where the reds are hiding. Dedicated lure chunkers just grit their teeth and hitch their wade belts a little tighter.

Calm mornings reveal large schools of drum and we sometimes see reds and trout in the mix, although getting any of them to take a lure has definitely been a challenge. Even so, it is encouraging to see them and know that everything will change when fall-like weather reaches the Lower Laguna.

The greatest puzzle lately has been trying to understand why redfish have not been more numerous on the flats through the summer months. Everything, even baitfish, seemed to mostly prefer deeper areas and we have had little choice but to follow them. Best opportunities have routinely been found along outer grass lines and other distinctive drops. Just in the last week or so we are beginning to see small schools and pods staging on shallow sand and patchy grass in the early hours. When they finally do make their way back to the flats we will probably wonder where in the heck they all came from.

Trout have been more cooperative although the size is quite disappointing. Literally dozens of fish measuring ten to fourteen inches can be found on any given wade. The trick is to remain focused because there are definitely better ones hiding amongst the juveniles. You just never know which cast will bring a five, six or even a seven pounder. Calm wind and mid-day heat shuts everything down but enough breeze to create some chop and bring a hint of color to waist-deep water over grass and potholes can keep it going longer. If nothing else, all those small trout are a sure sign of strong recruitment and better days ahead.

A couple more fishy topics: The throng of fishermen that came to Port Mansfield this summer beat all I ever saw or even imagined would show ever up. So much for all the worry that reducing the daily bag limit from ten trout to five would put the kibosh on the local economy. I think its pretty safe to say that if you build a good fishery the anglers will come.

Unfortunately with that great influx of traffic on the bay also came some dangerous boating situations. I cannot stress enough the importance of staying alert and following the rules of the road. I believe mandatory boater education for those born after Sept. 1, 1993 and operating greater than 15 horsepower is a good idea.

Moving on to tournaments; the Lower Laguna plays host every year to many fishing tournaments from small to quite large. Unfortunately there have been reports of alleged fraud (cheating) during some of the larger events in the local news media. HB 1806 recently enacted into law provides that felony charges can be brought for cheating in saltwater tournaments. Be advised that altering length or weight, presenting fish you did not catch lawfully, along with a bunch of other creative fudges, can now land you behind bars.

A true sportsman would have subscribed to a higher set of ethics all along. This law should give the would-be cheaters something to think about besides ways to win dishonestlyand its about time.

No one knows what early fall will bring but, traditionally tide levels will be up and that alone will alter the way we fish. Areas we havent been able to work in months will come back into play. Cooler water temps should put fish shallower for longer periods. October will no doubt require some creativity to discover productive patterns but regardless, the fish are going to be somewhere and, after all, this is supposed to be a challenge; right? The signs are good, believe they are there and get in there and catch them.

Life is shortprobably shorter if we dont fish!