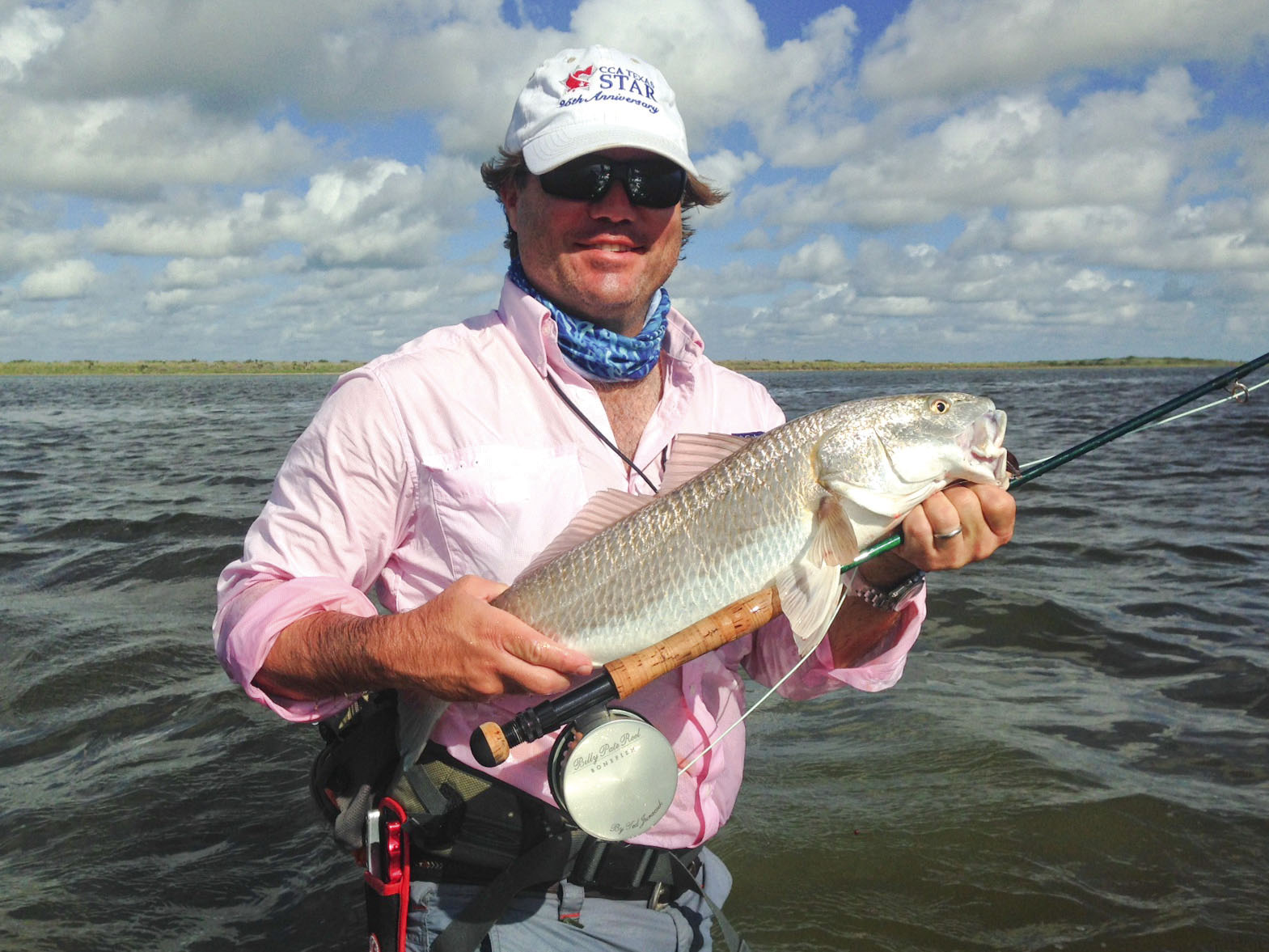 Barry landed a 26-inch trout on a topwater and moments later broke out his fly rod and made a perfect sight-cast to this redfish. That’s hard to beat!
October is one of the most anxiously awaited months of the year. Calm winds, cool mornings, bull tides, and herds of mullet invading the shallows are exciting to say the least. And, if we have a repeat of last year–get ready and hang on!

Water levels are already rising and mid-to-upper slot redfish have been fairly predictable. We have been quick to take advantage, and aside from the sight-casting, a strong topwater bite has been happening quite regularly as the wind picks up mid-morning. On a few of these trips smaller plugs were totally inhaled and larger ones were often stuck crosswise in their mouths. Good stuff.

I am still a big fan of full-size Skitter Walks, but October last year was amazing with Heddon's One-Knockers and junior-sized Spooks. Barring Mother Nature throwing us a bunch of wicked curves I am hoping to see a repeat.

While the action we are currently enjoying is certainly welcome I have yet to see the huge rafts of mullet forming up and this is a concern. I am optimistic it will occur soon–seems everything is running a bit late this year. Toward the end of the migration we expect to see the baitfish beginning to stage in winter haunts. We do not have nearly as many marsh drains as the upper coast but the bay floor has contours and other structure; man-made and natural cuts to deeper water, channel spoils, etc. These are the places you will want to target later in the month.

The crowds have already slimmed down and the high water level should be at its peak by the end of the month. Larger redfish schools should increase and both reds and trout should feed aggressively in the cooler water temps. Traditionally, October has been a good "get bit" month. Many fishermen know this and naturally there will be a lot of tournaments going on this month. Weekday fishing is greatly advised if your schedule will allow it.

When the baitfish have moved up shallow you can bet there will be scattered groups of big fish staged nearby. Drifters will do okay, but in many of these shallow and sensitive places, too many boaters running back to repeat shallow drifts can turn them shy. Not to mention that shallow takeoffs can dig up precious new sea grass each time they have to wallow out a hole, spinning to get the boat up. Drifters should also be mindful to avoid encroaching on waders in the area. Whether wading or drifting, the key is to move forward slowly (Power Pole down as necessary) and resist the temptation of casting directly into the middle of the largest bait concentrations. The fringes will give you more bites and you will not spook the bait. When bait spooks predators spook as well!

As much as we can't resist the urge to throw topwaters looking for better fish, dropping down with a soft plastic on a light jig should never be overlooked and this is quite often how we fool the better ones. I have had lots of folks who simply will not switch, even when I'm out-fishing them right at their side. I love topwaters, and even when they refuse to eat them I might continue throwing it simply because the swirls and blowups tell me where they and the mood they're in. When learned though, we must decide if we want blowups or hookups.

We are entering into a month of change, and saying that, I personally will be experiencing some big change too. My longtime partner has to give up some time on the water for a while, and basically I have been on my own out there for a couple of years now. I have been and still am blessed to have colleagues such as Mike over the years, and hope he is not out of the water for very long. Another exciting change in my business is that I am now offering a meal and accommodation package. Please call or email for rates and details. Come on down and get bit!