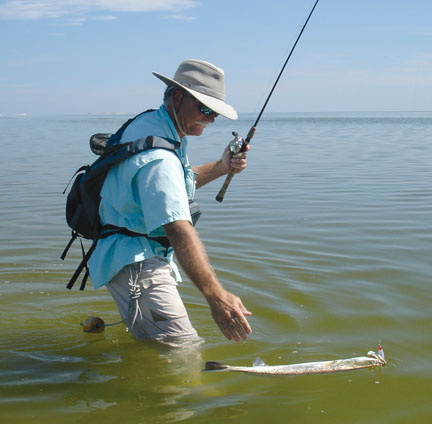 Shallow sand is always a great place for sightcasting.
Despite record-setting heat, fishing remains excellent here at Port Mansfield. Incredibly, trout and redfish are still smacking topwaters as though it was springtime. We have received only 1.87" of rain since January 1 and we have just entered a Stage-4 drought with the hottest summer on record for many parts of the Rio Grande Valley. Regardless, fishing has been as hot as we could ask for, and the only little cloud has been that the entire fishing world seems to be taking advantage of it. Good for them, we just hope it's good for the fish. Again, for those of you who worried that a reduced trout limit would discourage fishing interest, the businesses here might happily disagree.

Overall fishing patterns have varied little since last month. The water has remained clear and the levels are still low. The only significant difference has been the persistence of stifling, broiler-like wind that hits us before noon most days. Mornings have predictably been best. You need to hit it early and you want to be right on the edges of color as the wind stirs the water. The shallow flats stay relatively clear but after the coolness of morning passes most of the better fish have retreated to waist-deep potholes and grass beds. Topwaters for as long as conditions allow and then tails for the remainder of the day has been the plan. Although the system is full of juvenile trout, we are still getting lots of nice fish with the occasional five to seven pounder to round things out. We are still seeing larger trout prowling the flats so we know they are there, however catching a true beast this time of year on lures is a challenge.

Redfish have been in good supply around waist-deep sand pockets dotting heavy grass. That's not to say that some shallow tailing activity hasn't been going on, but most of those fish have been smaller and haven't held very long, especially on high traffic days. Most consistent action remains deeper.

Floating grass continues to cover many prime areas and strong wind uproots a new supply each day. Single-hooked topwaters have saved many an outing allowing us to work areas where it can sometimes be tough to get soft plastics through the stuff. The 3/0 Gamakatsu "Live Bait" hook on the front and a 2/0 on the rear fits most mid-sized plugs. Remember to use two split rings if the hooks don't already have one pre-attached.

Just the thought of September makes the dog days more tolerable. My hopes are already soaring as water level here is projected to be a full foot higher by the end of the month according to Texas Coastal Ocean Observation Network (TCOON). A push of Gulf water will spur a lot of activity. I am also hoping that with school in session and dove hunters heading to the field we will see reduced traffic on the water. Last year we started seeing numbers of impressive trout using the sand flats in mid-September right alongside the reds.

Higher water level will bring more sightcasting opportunity. Soft plastics in natural colors are usually the best bet but topwaters can certainly work when the fish are schooled and feeding competitively. Single fish will always be the most difficult as they tend to spook easily. Yes we can take potshots while drifting, but stealthy wading with tails on light jigs is my favorite. Pausing the lure under the fish's nose will often trigger an explosive strike. Remember - never throw directly at the fish, your offering needs to arrive as a meal, not a threat. Landing the lure slightly in front and beyond, then working it close, will bring more strikes. This is especially true with topwaters and I find that smaller plugs are often the best choice.

Fish are easiest to spot over shallow sand and of course we need good light. However, the edges of spoil banks can also offer excellent sightcasting opportunity. Seeing the fish is great but learning to key on other signs can be just as effective. Wakes, swirls, mud puffs and fleeing bait are also sure indicators. Don't overlook the importance of quality glasses with amber or vermillion lens to increase contrast. A fishing cap with a dark underside on the bill helps reduce glare.

The prospects of higher water levels, cooler days, reduced crowds, and an incredible fishery all have me excited. Here's wishing you a great month of fishing on the Mother Lagoon.