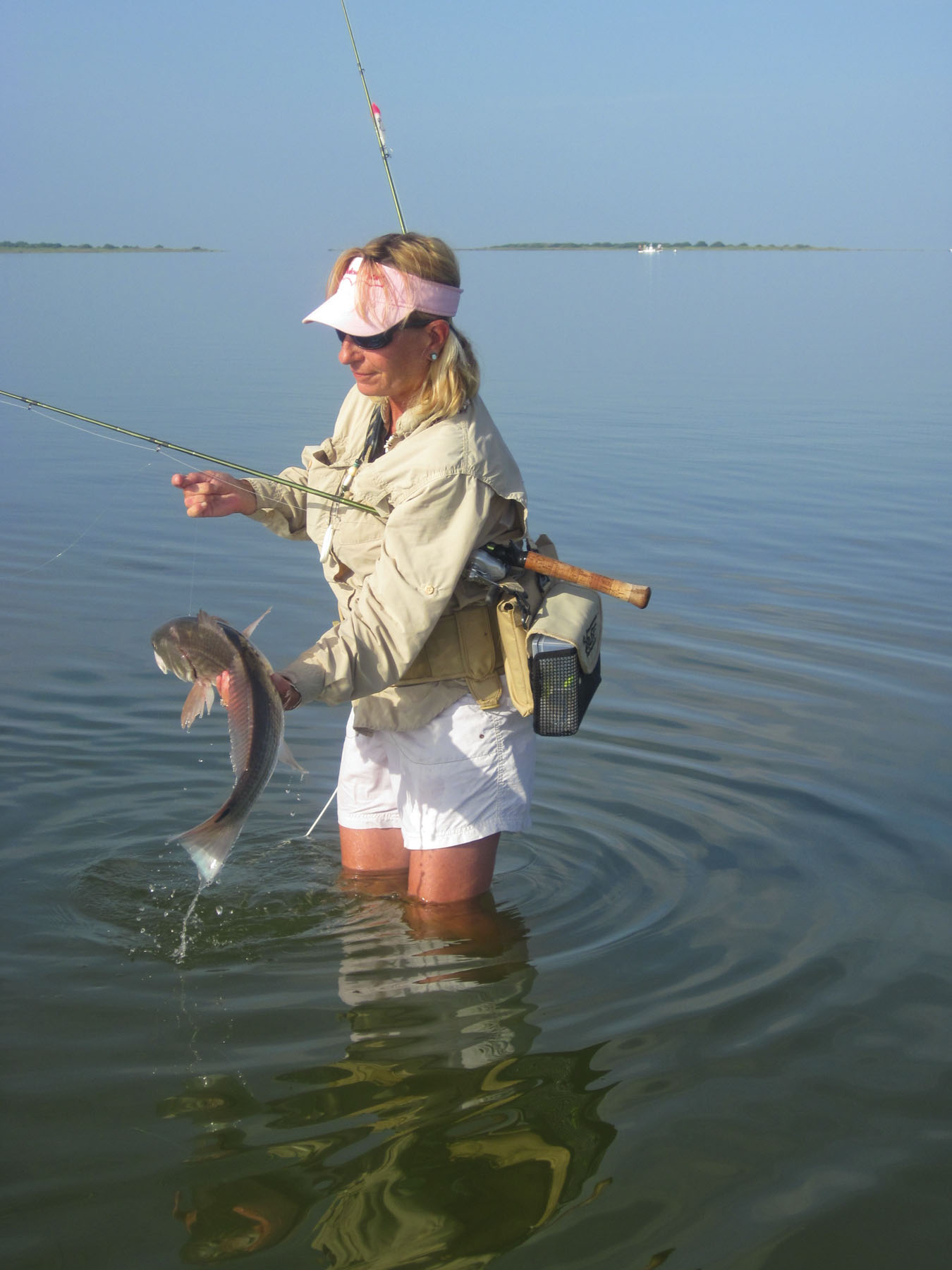 September will bring lots of opportunity to sight-cast shallow reds.
As of this writing, water levels at Port Mansfield remain about 18 inches above normal. Runoff from the Rio Grande continues to pour in at an historic rate. Even so, fishing has been about as good as it gets and September should bring more of the same.

There are about as many trout in our part of the Laguna as you'd ever want to catch. Unfortunately, many won't make the minimum mark, but just stay busy going through them as there are some great fish swimming amongst those little guys. Let's try to be careful with the babies though, and bending some barbs back these days is often a good idea.

Just about every depth and type of structure has been holding fish lately, from shallow sand early in the morning to deeper potholes and grass beds later in the day. This can be found from east to west and north to south. Soft plastics have been the best producing lures and simple colors like the good old pumpkinseed-chartreuse and red-white have been as effective as anything. The whole system is extremely healthy so just look for a little bait and perhaps a few birds near color changes and get out there and get busy. The topwater bite is improving and larger plugs such as Skitter Walk and She Dog have been getting clobbered when it's on. The bone color is doing very well and when the floating grass becomes too thick we simply switch over to single hooks and keep plugging.

Concentrations of redfish, conspicuously scarce the past couple of months, finally started to make their move to within wading depths. The Laguna is also loaded with shrimp and we are finally seeing good pods of fish swimming head to head and rooting them out of the grass. I am predicting large schools to begin working sand-grass edges more consistently during September and October.

What is going to be very different this fall will be the lingering effects of the extreme amount of freshwater still flowing into the Laguna from earlier tropical events. The massive International Floodway, which directs floodwaters from the Rio Grande to the Arroyo Colorado and also through the El Sauz Ranch south of Port Mansfield, has been running levee to levee for well over a month now. The bay water, at least on the surface, has been fresh from the Arroyo to the East Cut at a minimum, sometimes extending farther. Who knows what the aftermath will be, but we do know what happened to the Laguna after the Hurricane Dolly flood in 2008.

After Dolly dumped 25 inches of rain on the local watershed, it seemed that large populations of fish were driven towards saltier waters nearer to the East Cut. As early as mid-September we started seeing an unusual amount of large trout stacking up over shallow grass beds. Overall fishing continued to improve well into the spring of 2009, and we ended up with the best big trout year anyone could remember. There were many days during that wader-wearing season when we caught twenty, thirty, and sometimes even more trout over 5.5 lbs per trip, which in this day and age is virtually unheard of except for a very few rare occasions. This current freshwater event now far exceeds whatever Dolly had to offer, so it's exciting to say the least to find out what the coming fall and winter seasons will bring us.

As mentioned, our tides are still running quite high here. According to the Division of Nearshore
Research (http://lighthouse.tamucc.edu) where we can pull up current water levels and future
projections, we are supposed to be experiencing low tides instead and with an increase expected
through the end of October. Who knows how that will play out, but suffice to say that many areas
we might like to work have just been too deep to wade lately. The good part is that this means
there is a lot of new water to explore and more room for the ever-increasing crowds we have
been seeing.

We heard a rumor that some folks don't think the five fish limit is working down here. If that is so,
why do we suddenly have more boats down here than ever and with better fish to boot?

At any rate, fishing should be quite interesting this fall, and with any luck, better than we've seen for quite a while. When you fish as much as we do there is little left to get you excited. Let's just say that I am very excited these days, as every day on the water just keeps getting better and better. It may be time to call in sick.