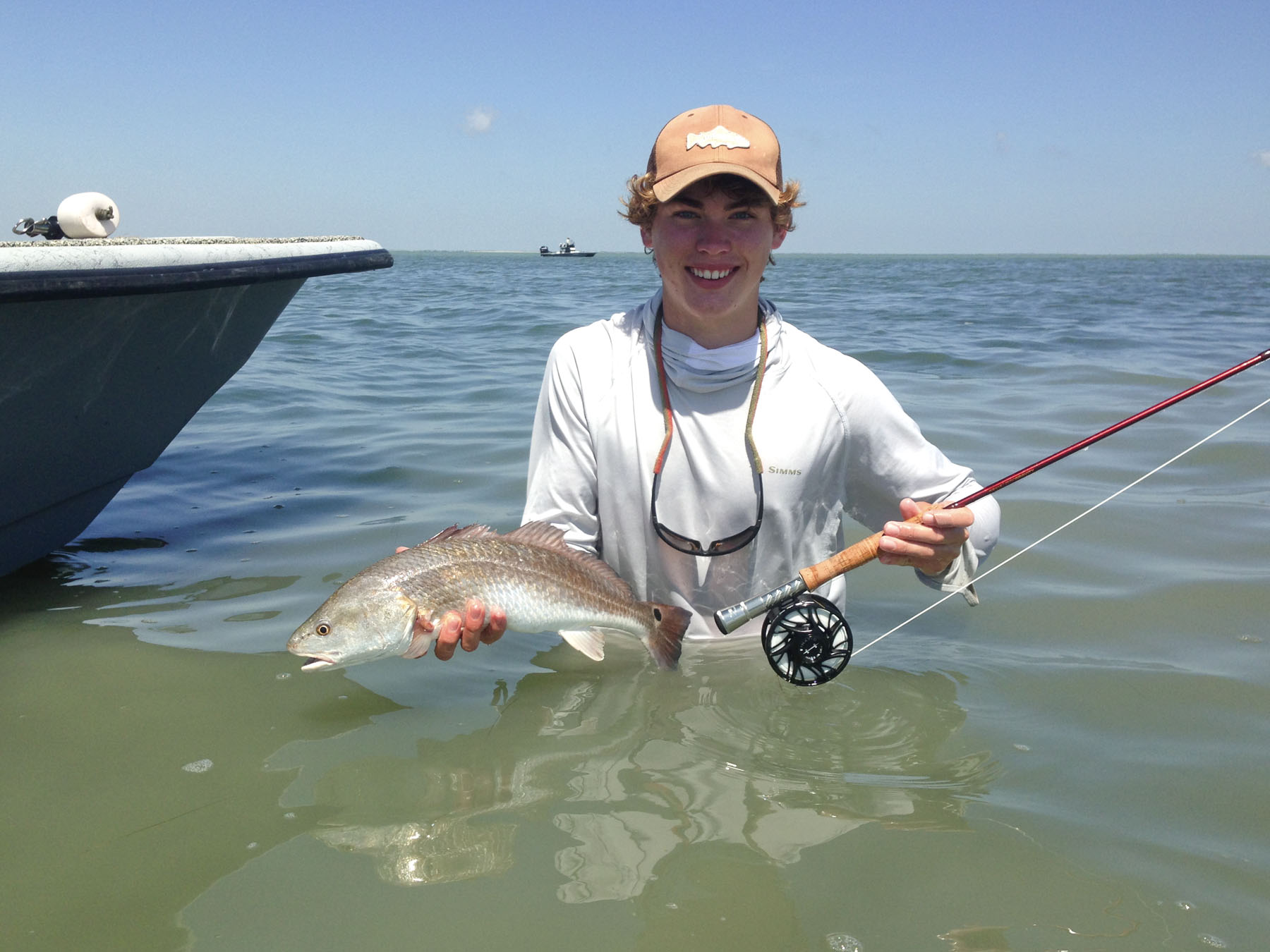 Jakesy’s first red on the fly; he was so happy he kissed it right on the lips!
The Lower Laguna Madre continues to offer everything the lure fisherman looks for despite desert-like heat and enduring drought, we just sometimes had to work a little harder. Targeting better trout was often challenging because of low water and tons of floating grass, but its a worthy challenge. And fortunately for us, most visitors to Port Mansfield are eager to take whatever the conditions have to offer and appreciate the environment like no other.

Knowledge and persistence are key here on the very few light wind and low boat traffic days we have been getting. The stealthier among us had big payoffs sightcasting to giant trout and flounder in shallow potholes on shorelines and skinny back bay areas. Four and five pound flounder hitting topwaters was a hoot. Casting to fish you can see is always exciting, add seven to eight pound trout to that equation and I think pretty near all lure chunkers would agree; it doesn't get much better than that!

For those desiring more of a "get bit" trip, we can oblige that request most days too. Our bay system has tons of juvenile trout, and when they decide to feed, its game-on with a six to ten keeper ratio. It is important to handle these fish with care if we value tomorrow, and if we continue to do so the future trout fishery seems bright.

The higher percentage places for better trout have been along the deeper breaks near the Intracoastal and shorelines with deep troughs near the bank. We definitely are seeing more trophy class trout cruising the skinnier stuff though, and look forward to them becoming more catchable in the next few months.

However, as of this writing, redfish have not been as cooperative, and sometimes we wonder where they've all gone. Occasionally what we call "redfish wolf packs" have given us some incredible blowup sessions in the skinny where large baitfish schools are hanging, but we have not done this very often. Hopefully this soon will change.

September is a month that will bring change. Doves, shotguns, football, friends and beer usually dominate this month, but a whole lot of you will want to get some fishing in there too, and in that regard September should not disappoint. Overall water levels should increase and with it the Laguna's entire personality.

We are already seeing some large baitfish migration and this should become even more noticeable as September rolls along. Redfish schools should be forming and if you are lucky enough to spot them it can make for some exciting action. Very often we do not stop to fish the schools early, but fish for trout instead. I like to make a note of where they were and find them again when heat and boat traffic has moved them to dropoffs and deeper potholes on the flats. Later in the month they should linger longer in the white sand and we will certainly take advantage of sight casting opportunities.

Trout will begin to feed more aggressively as water levels rise and temperatures recede. They are already identifying with chunky potholes on the shoreline and will do so more and more.

We need to remember to find those large rafts of mullet and fish the edges. They will be one place today and possibly further down the shoreline tomorrow. This is a month of significant trout spawning and you can bet they will be gorging right along with the redfish. It always seems to me that as soon the water temperatures begin to recede they really put the feedbag on.

I am still excited. Are you?

Tricia's Tips
- Brown pelicans are you friends.
- Work the wind... light west and southwest perfect for shorelines...heavy southeast fish the flats and back bays.
- Until the tides rise the entrance to the harbor is extremely shallow; some boats are hitting bottom.
- There is still no gas at the Exxon but the new Poco Loco Marina has gas and is a first rate operation.
- Lots of stingrays... wear your guards!