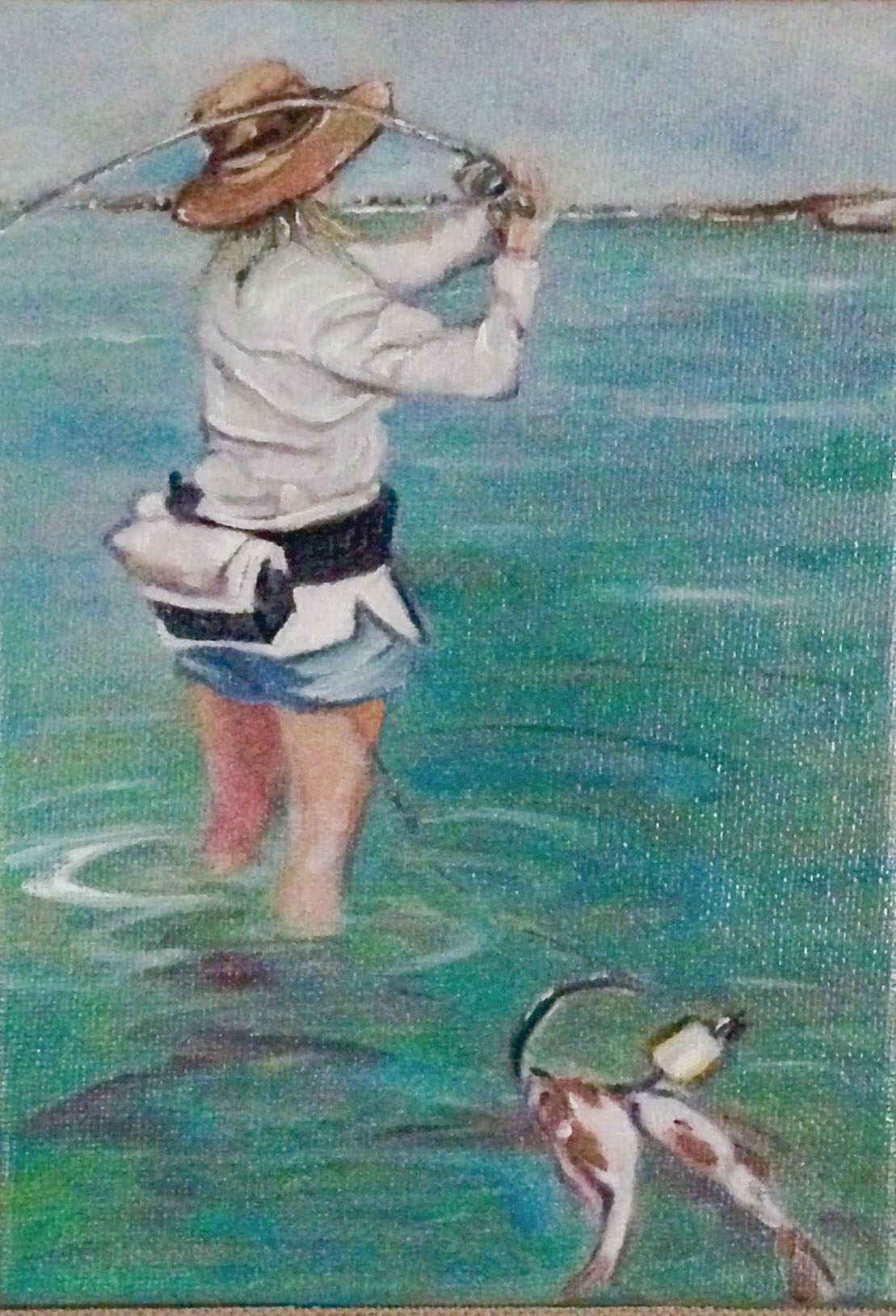 My sis, Pam Whitley, is the artistic one in our family. That’s me doing what I love best—sight-fishing the shallow sand flats of the Lower Laguna.
Despite the lack of rainfall during July and thus far in August, the typically harsh and arid South Texas landscape remains rather lush from the heavy rains we were blessed with in May and June. When you put water on an area which normally doesn't get it the land really comes to life. The rain and local runoff seems to have also given our hypersaline Laguna a welcome boost. We are still seeing shrimp dancing on the surface and an abundance of blue crabs scurrying in the grass. In short, Deep-South Texas is robustly healthy for now and, with any luck, so will be September's fishing!

Recapping late summer; it has been fairly typical with low tides, calmer winds, and topwaters fouled with wads of floating grass. Yes, we shake our fists at those floating strands of weeds but an abundance of grass is largely why we enjoy clear water and a thriving ecosystem. Overall fishing patterns have varied little since last month. The water has remained mostly clear and the water levels are still low. The only significant difference has been the persistence of stifling, broiler-type wind that hits us a little before noon most days. You still need to hit it early, and you want to be right on the edges of color changes as the wind builds and stirs the water. Shallow flats will stay relatively clear, but after the coolness of morning passes, most of the better fish retreat to off-colored waist deep potholes and grass beds.

Topwaters are still getting smacked as long as conditions allow and typically by larger fish (when you can keep them running clean), both trout and reds. Although the system has many juvenile trout, a very good sign for the future, we are still getting on some nice ones to round things out. Redfish have been fairly steady. FINALLY – most days have been providing them in good supply around waist-deep sand pockets dotted with heavy grass. There are some on the shallow eastside sand early, but most of those fish have been on the small side and do not remain there long, especially on high traffic days. It is definitely safe to say that our most consistent redfish action remains deeper.

Just thinking of September gets me excited. My hopes are already soaring with the approach of higher waters levels pushing in bait from the gulf and spurring gamefish feeding activity. September is still going to be hot, but with higher water, and hopefully fewer boats, maybe we will see the fish in the shallows more often. If overnight conditions have been favorable for a cool-down, (cloudless skies overnight, etc.), the sand is worth an early look. If you see good bait and wakes up shallow, be confident, be quiet, throw lures and get them. A K-Wiggler pumpkin-chartreuse Ball Tail Shad or paddletail on a 1/8 ounce jig head is hard to beat, ditto a bone-silver Super Spook Jr worked softly. The challenge will be making the decision to precision-fish the skinny or go straight to deeper water.

We have a lot going on down here in the Lower Laguna Madre, my prediction is that September should bring many new fishing opportunities into play. The Labor Day weekend, while hardly the end of summer down here, is the end of fishing season for many folks. Boat traffic will be noticeably lighter after the second weekend and less noise from racing outboard engines usually signals better fishing. Let's keep our fingers crossed weather-wise. While a small tropical system with some moisture wouldn't hurt, nobody wants to hear the H word with damaging wind and storm surge that so often comes with a major weather system.

Come on down! If you live for surface crashes don't forget you will probably still need single hooks on your topwaters to get the best of the bite.