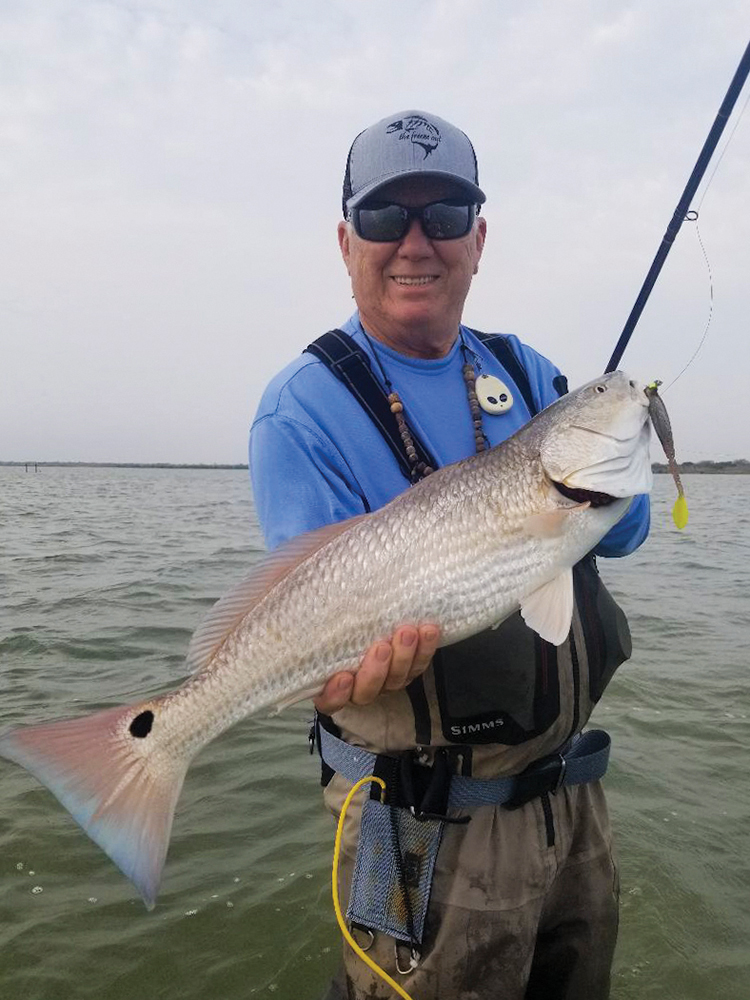 Joe Meyer of Fishing Tackle Unlimited sifted through a bunch of redfish, hoping for a trophy trout.

Howdy from Port Mansfield – where we have been anticipating spring for quite some time.  As of this writing I have documented water temperatures as high as 76° recently. Heck, that’s nearly warm enough to wet wade if the air temperatures were warmer.

I see April as our last “best” opportunity to land the heaviest trout of the year. I must say though, I am a little concerned with the water temps rising so early. However, we had a cold front the first few days of March that knocked those temps back down, so hopefully that will delay the onset of spawning a bit and the larger trout will maintain their winter weight an extra week or two.

I am happy to report we have seen some heavy trout, up to almost nine pounds. Having said that, only a few have been seen and reported. We would love to see more, but we have not. This trophy trout season has been fair with the occasional great days mixed with some tough ones. Heck, that’s exactly what “fair” means…right?

As we battled some pretty cold days during late February and early March, we landed some trout that were unusually heavy for their length. A 28-incher weighing more than eight pounds fits that category.  When we were in the zone of those heavy fish, I kept thinking what if we hook a 30 or 32-incher? As heavy as the fish were running, one that length could have easily surpassed the 10-pound mark.

April is the month that I put trophy trout fishing on hold and transition to concentrating on what I call solid fish. However, last April through June, we did land a few touching the 30-inch mark, but the weight just wasn’t there. Having said that I’ll be sure to be fishing where those opportunities exist because you never know your next cast could be “the one.”

Our water is in great shape, the seagrass is healthy, and when fishing potholes I am pleased to see piggy perch and other small bait chasing my plastics. These are great signs – grass, potholes and bait. A surefire recipe for catching lots of fish.

As many are aware, spring means wind and here in Port we have no shortage of that. I used to cringe at 5:00 AM when I awoke for a charter and could hear the wind howling. However, it’s just part of it nowadays and I have learned to use it (under 30 mph) to my advantage. Wind creates current, color changes, and can funnel bait and gamefish into predictable locations. Best of all you can cast a mile.  Besides, I have now two Power Poles and they hold my 24-foot Shallow Sport Classic just fine.

Dealing with April wind, I’ll likely be up on the protected east flats much of the time, where bait has congregated. Redfish should be plentiful on the flats along with occasional “late bloomer” trophy trout.  On the flats you can either work edges of grasslines, potholes, or thick grass bottoms. This time of year the fish could be in any or either of those “fishy” zones so search for signs of bait and start there.

If floating grass is not too thick I’ll be tossing topwaters, even if it is super windy. I have become confident throwing tops in high wind. I’ll be tossing the good ol’ One Knocker, She Dog, or a new one from Shimano called the Colt Sniper.  I’ve only used that bait a couple days but I can tell you the coloring and sheen on it looks awesome. If we have a floating grass issue I’ll be on the KWigglers Ball Tail Shad if out in waist deep water, or the Willow Tail and 4-inch paddletails if shallow.  Either one of those two lure styles in shallow water are very effective.  The Lagunaflauge color has far exceeded our expectations. It can flat out catch fish in nearly any water clarity.

A friendly suggestion for those hosting fishing tournaments this year. It might be worth considering more conservative tourney stringers and fish lengths being weighed in. With increasing numbers of anglers on the water, coupled with more tournaments, it just seems reasonable to adjust the formats.  Our fishery is fragile and any efforts we can undertake can make a difference. Just because the law says we can retain a certain number doesn’t mean we have to.

I would like that thank everyone who came out to the Houston Fishing Show and visited, we had a great show and it is always nice to see old friends and meet new ones. Until next time, stay safe on the water and practice catch and release whenever applicable.