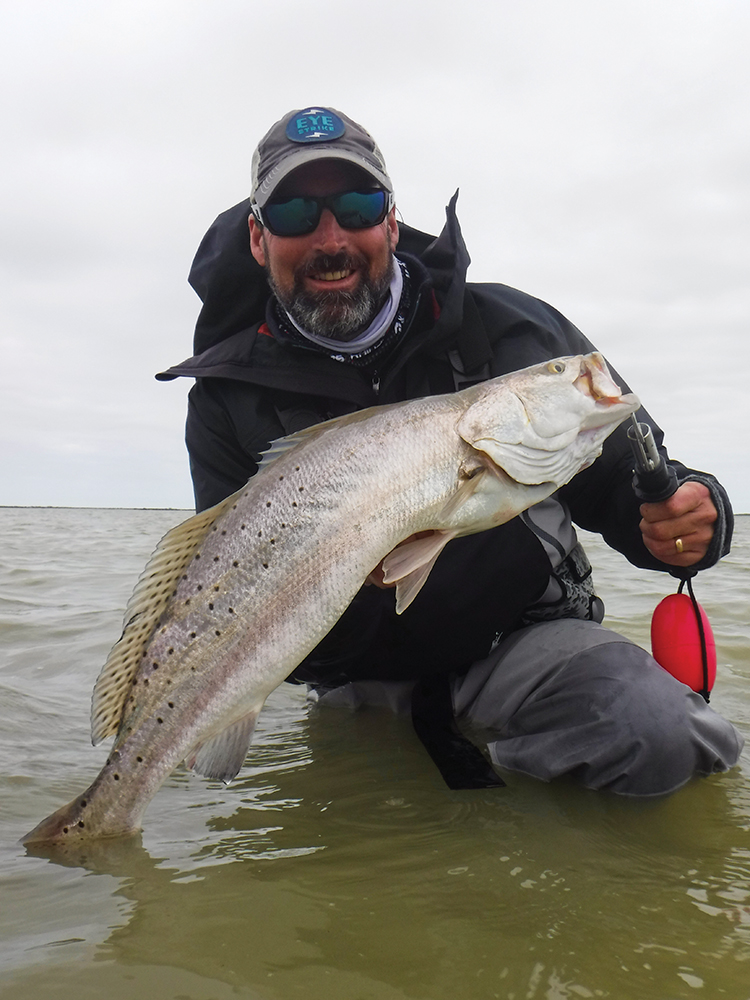 Dave Fladd came all the way from South Carolina hoping for one big fish!

Greetings from Port Mansfield. We’ve had a mild winter, no doubt. A couple of cold snaps but nowhere near the long stretches of chilly temperatures like we have experienced in years past. But all that is about to be over, save for a late norther or two, and we’re looking spring dead straight in the eyes.

We had some exceptional days over the past couple months for quite a few lucky anglers. A large percentage of my wintertime clients come from various coastal states hoping to find a Lower Laguna trophy and I enjoy learning how they fish for speckled trout in their respective home waters. Mississippi, Louisiana, Alabama, and South Carolina all have trout, but rarely do they see one over five or six pounds.  An eight pounder in their waters is a rarity to say the least.

Setting out on trophy trout quests, I tend to concentrate on areas where big females are known to stage. Over the years I have identified several such areas and have learned the nuances in each of them. I’ve spent hundreds of hours in these zones and have witnessed things come alive, go dead, and come alive again. Having said that, I’ve also learned (or at least I think I’ve learned) when to move to a totally different area. Of course, a variety of factors can play a part in these decisions; boat traffic, wind, barometric pressure, air temperature, water temperature, water level, water clarity and the presence of bait, to name a few. I work through the “fishing equation” and make the best call and then go with it.

As of recent we have stayed shallow, rarely have I waded in water deeper than my thighs the past month and a half. I’ve come to love shallow water wading tactics; mostly because of the rewards it has to offer. A great example is good friend and client Larry Higgins seen on this month’s cover. We were fishing in muddy water, just over ankle deep and the winds were howling up to 30 mph with occasional stronger gusts. What was most amazing was that we were catching redfish and trout, with some reds more than ten pounds. It’s like they would hit your lure out of nowhere and then a massive wake from the fish would appear in the choppy, muddy water. We did this for well over an hour, until basically it was time to leave. The lure of choice in these conditions was the KWigglers 4-inch paddletail.  We simply used this bait because of the water clarity and high wind – this bait gives the angler the edge under these diverse conditions because it puts off so much vibration as you pull it through the water. I find myself using these same tactics time and again when the conditions are as described.

As March comes to an end and April rolls in we can expect trophy trout season to wind down somewhat. There might still be a shot at a thirty-plus fish but March usually gives us the heaviest weights. A few years back I caught a nice thirty-one-incher in April but it had grown noticeably slender and not a butterball.

We can also expect high winds from the southeast to dominate across the LLM but we can use that wind to our advantage by working current lines and windward points. Don’t be shy of off-colored water. If those two scenarios don’t play out, consider leeward points and shorelines. If the water level is high I’ll also be exploring the back bays, concentrating on shorelines and small drains.

The KWigglers Willow Tail Shad and 4-inch paddle tail will be the baits of choice while fishing knee-deep and shallower. Preferred rigging is with 2/0 black nickel jigheads in 1/16 or 1/8-ounce. When working windward points I’ll likely opt for the Ball Tail Shad on the 1/8-oz jighead. Best colors have been Plum-Blue Metal Flake with chartreuse tail, Strawberry Cool Tip. Just lately the Flo Mingo has been hot.

In closing I would like to thank the RGV Chapter of CCA Texas for recognizing myself and Captain Ernest Cisneros and our Empty Stringers Catch and Release Program and bestowing Conservationist of the Year awards for our efforts. We have been pioneering this program going on four years and to date we have released approximately 8,000 “keeper” fish back into our bays. What an honor for doing something that just feels right and makes sense all at the same time. Our success in this would not be possible without great anglers who willingly participate and great sponsors who support the cause. We hope this trend can continue.