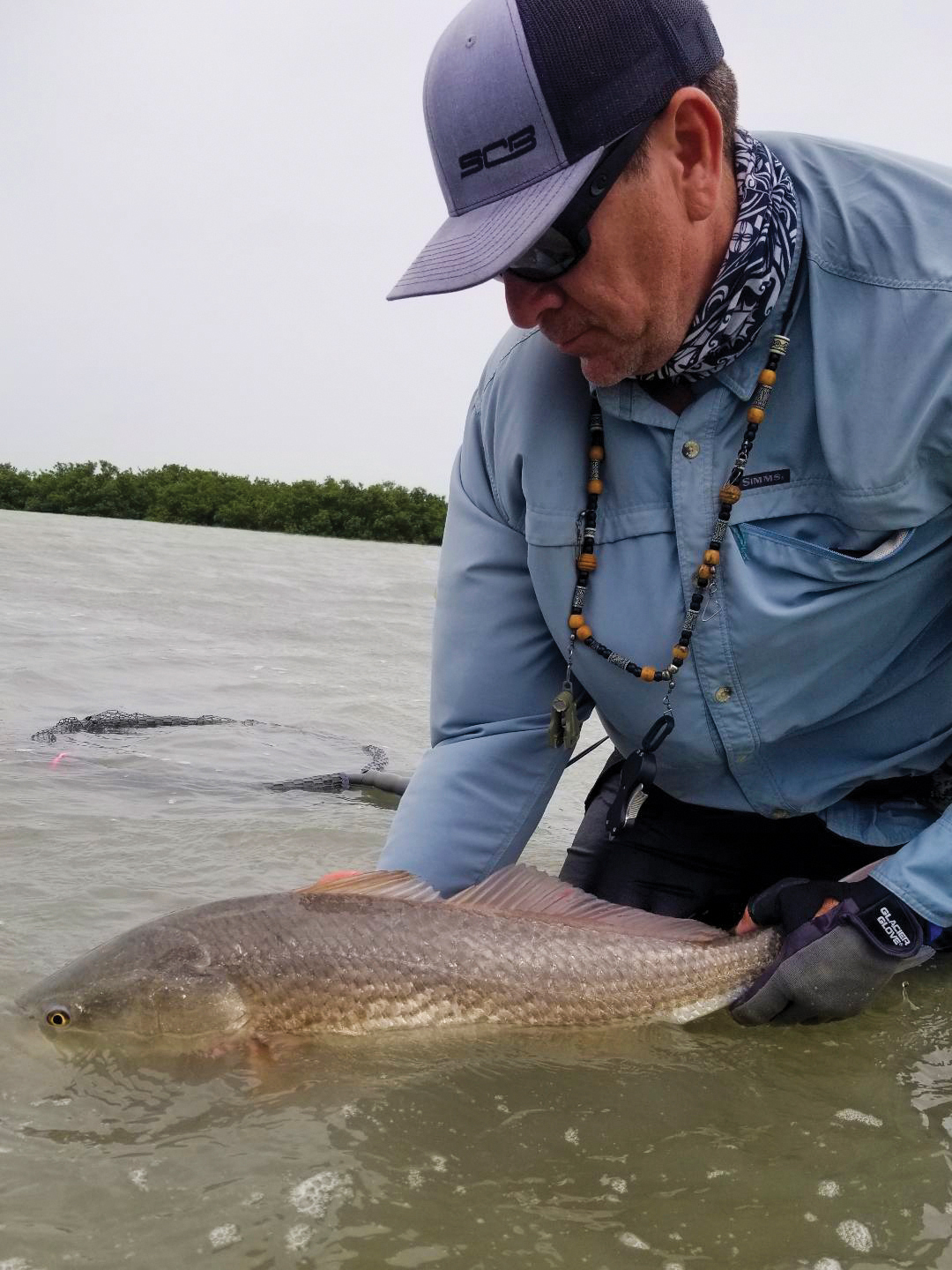 Sonny Hinojosa releasing one of many “tournament winning” reds landed during the Shallow Sport Owners Tournament.

Greetings from Port Mansfield!  Late spring and early summer weather patterns have made it necessary to adapt to strong southerly winds longer than expected. We’ve had a few days of seasonably light wind but, in general, we have had to tuck and run more days than I care to remember. Even late-June gave us sustained 20-to-25 with gusts to 30, and that’s just not normal. In a perfect world, gusty southerly flows are mostly in the rearview by mid-June and in July we expect calm mornings with breezes developing around noon and maybe reaching 20-mph by late afternoon.

Sneaking through the East Cut jetties on a calm summer morning is always a great change of pace for bay anglers. Who would want to pass up a nice mess of delicious red snapper fillets and maybe some sight-casting to occasional ling and kingfish? I’m sure praying the wind gives us a break soon!

Water levels have remained high, which certainly boosts water clarity on windy days, and also allows the shallows on the eastside sand flats to cool considerably overnight. Having said that, on a recent trip I was returning to Port high on the east flats and noticed some bait and a fair spattering of redfish in a small zone. I had a new group the following day so I thought; I bet this area will have better fish right at sunrise. I made a mental note and decided to give it a go.

We arrived high on the hard-packed sand just before the sun began to peak above the horizon the next morning. We slid off the side of my Shallow Sport Classic into cool mid-calf water and immediately noted the area was covered with nervous bait. Every couple of minutes you would see or hear an explosion. The winds were gusty but we were so high on the sand that the water was gin clear. Within minutes we started connecting with trout and reds; one trout went five pounds.

The hot baits that morning were the KWigglers 4-inch paddletail in Honey Gold-Chartreuse and Willow Tail Shad in Mansfield Margarita. We had a blast until 9:00am when they suddenly shut down like somebody had thrown a switch. Not one mullet or gamefish to be seen…it was over. The sun had climbed to the point where it moved those fish off the flat to deeper water. This kind of moment provides an  invaluable lesson in how quickly fish can turn on and then disappear. Timing really is everything!

So, with this in mind, consider earlier starts in the summer and have a solid “first spot” plan in mind. Factors to consider when developing your first spot plan are water levels, wind, water temperature, lunar phase, boat traffic, bait presence, and water clarity.

Our catches have been fair for small- to medium-keeper trout with a few reds mixed in. Just about every trip we pick up a flounder, sometimes two or three. In general I would say this has been one of the better flounder years we’ve seen in quite some time. About three months ago we started catching small flounder, some barely 14 inches, but now we are seeing some 19- to 21-inchers, with one on a recent trip going four pounds. In addition to the flounder, snook are another surprise. I typically do not target snook, the ones we’re finding have spread into what I would call normal trout and redfish haunts.

Something else to ponder: As I set out for a wade, especially on weekend days in popular fishing areas, I take note of the number of boats and anglers within sight and try to calculate the number of fish they will likely be keeping. A conservative estimate would be two fish per angler, weighing an average of two pounds each. Even by these conservative estimates I come up with several hundred pounds being taken from an area not much larger than a few hundred acres.

I then try to recall the number of boat trailers in the parking lots and empty boat slings in the harbor, which brings me to an even scarier harvest calculation. This does not include tournaments that are held just about every weekend, nor does it consider the number of boats running from private docks.

I mention this so you can run your own numbers, or at least give it some thought. We have a fragile ecosystem here on the Lower Laguna, which causes me to wonder how long our Mother Lagoon can continue to give up so many fish.

Enjoy your time on the water and practice catch and release when you can.