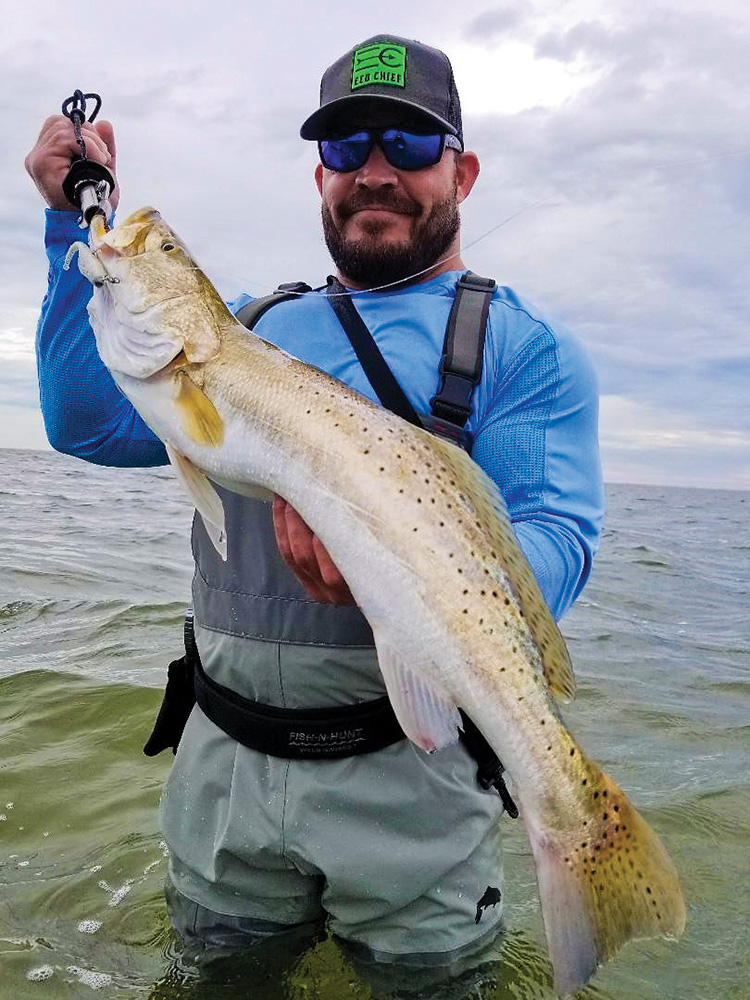 Jason Shook shows off a nice 28.5-incher that pulled the Boga to 7 pounds. Jason was using a KWiggler Ball Tail Shad.

Greetings from Port Mansfield.  We were excited with the couple of cool snaps during late October and early November that helped bring our water temps down. If you haven’t already done so you need to make sure your Simms waders are ready for the season. The day before the first cool front arrived I slipped on my 10-year-old G4s and went to a buddy’s swimming pool and walked around in it for about 30 minutes. No surprise – I found zero leaks!

Water levels remain high and have only fluctuated about six to eight inches on any given norther.  However, as fronts become more pronounced we should see water levels recede more and more as we move into winter. Water temperatures have dipped as low as 61° but recovered quickly into the low 70s as soon as the sun came out. Our gamefish seem to like the cooler temps, staging regularly along grass lines associated with sand flats. Even more exciting, the larger trout have been found off the grass line and up on the sand until the sun gets high. The primary key in this scenario is having some amount of bait present. You don’t need a ton, just enough to keep it interesting.

As the northers push across the coastline we will invariably encounter some high-pressure bluebird days. These can be challenging for even the most persistent and experienced anglers. Beautiful days do not necessarily mean you will catch fish. It is often quite the opposite but I’ll save that for another article.

On a recent trip we found an overwhelming amount of bait and my anglers were catching trout and reds on a regular basis. This was the day a weak norther arrived; we had a light, cool north wind with overrunning clouds and slight drizzle. The next day we awoke to calm conditions and a blue bird sky. We went back where we’d been the day before and as I was approaching the sweet spot I could see bait just below the surface as my 24-foot Shallow Sport Classic slowly settled off plane. Setting the Power Pole I did not see any bait activity. I recognized that the high pressure had “pushed” the bait down. We managed a few fish but it was a grind. We did our best with what Mother Nature presented us.

Since my last writing we have stumbled on some of those larger trout that were so hard to find back in late summer. We have not found a bunch but enough to give us a boost in confidence and even for some a shot at landing one or two. Our largest so far as been a little over seven pounds at 28.5 inches.  You can tell winter is approaching because their girth is increasing. Our reds have not been scattered as widely as they were and we are managing some decent catches. Most fish have been holding in less than waist-deep water but there have been some good catches coming for drifters working out in four to five feet of water over deep grass beds.

We have not quite established a strong pattern on the big trout yet because the water temperatures fluctuate as much as 12° during a day of fishing. We had four trout over 23 inches on one wade recently with others coming unbuttoned during the fight. I recognized the water temps hovered around 64° while we plugged away for these bigger trout. The next day water temps were up around 70° and the big trout we were on the day before moved out. Coupled with the water temperature increase we were now on a blue bird sky day with the barometer on the rise. When you are faced with a similar scenario, adjust your game plan by moving out a little deeper or working a ledge or cut that is close to deeper water.

The KWigglers Ball Tail Shad and Willow Tails in Bone Diamond, Flo Mingo and Tide Runner have been the best for us. As temperatures continue to drop remember to slow your presentations accordingly. Doing this will increase your bite ratio and hopefully your catch ratio as well.

As for topwaters – we are still tossing One Knockers when the floating grass is not too bad and having some success. Just remember to slow down your retrieve and allow your topwater to pause on occasion, you might encounter a welcoming explosion when your lure is just floating.

Until next time, stay safe and I hope you have a wonderful Thanksgiving and Christmas holiday season.  As always, please remember to practice catch and release with those larger fish, we need them to stick around and spawn for generations to come.