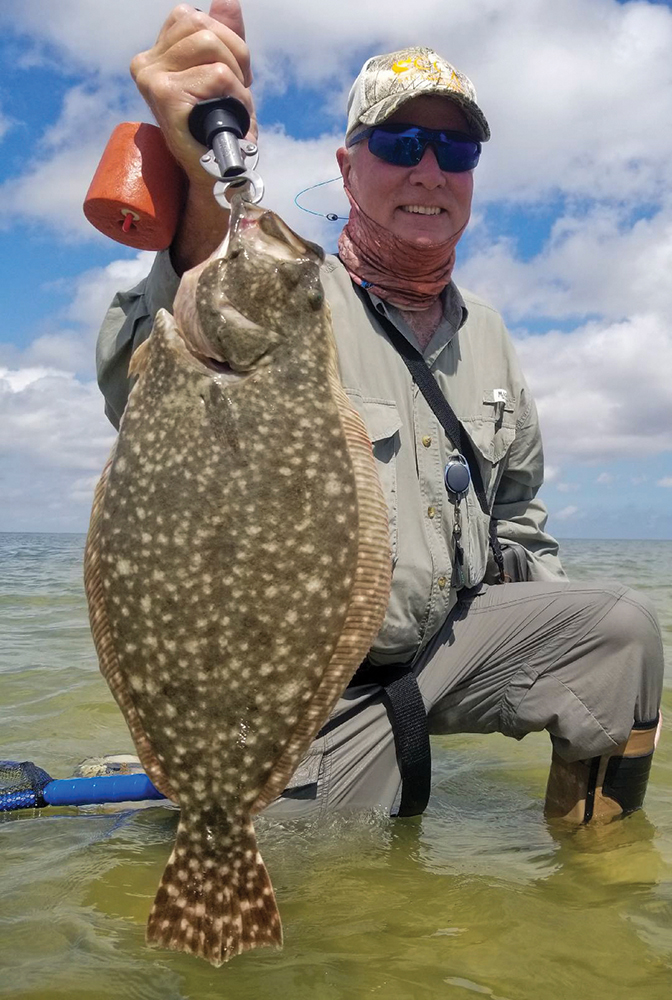 Howdy from Port Mansfield.  As I sit here pondering the content of this report we have already experienced some really cold weather. Having said that, I’ll provide my opinion on fronts in general and some of the effects they can have on fishing.

To begin, we had only a brief snapshot of normal fall weather and fishing patterns. Summer lingered forever and then crashed headlong into an early-October front that dropped water temperatures 15° overnight. Even though very abrupt, this event had little if any negative impact on fishing. You had to be dressed properly to enjoy it, though.

Late October and early November brought additional fronts that were indeed much colder, perhaps jumpstarting what might prove to be a prelude to winter patterns arriving earlier than normal. The question that now looms is whether a prolonged stretch of warmer weather will put us back into the transitional patterns of a normal fall season or actually prove to be the beginning of winter.

Case in point, one day we were wet-wading in 83° water temps and the next day we were working in 62° water under a perfect bluebird sky. That’s a pretty significant change. That temperature drop and quite possibly the high barometric pressure following the front did influence our fishing. It seemed on this trip that the trout were indeed finicky and behaving in transition mode.

I told my guys we needed to fish slow, on the bottom, barely bouncing our plastics through each pothole and prop scar. Bites were tricky to detect, about the same as if a single blade of grass was hung on the hook.  Once we, the anglers, “transitioned” and slowed down, we started catching fish.

With the first fish landed I waded over to my client who was removing the lure from a pleasantly plump two-pound trout. I asked him to flip it over and guess what – the belly of that fish had small parasites clinging to it, (argulus – also known as fish lice). This is a tell-tale sign that fish are on the bottom and not moving around much. When fish are active and swimming normally there is little chance for this to occur. This is a variable in the transitioning equation that we should pay attention to if we want to be more effective anglers and catch more fish.

The fish we were catching on that day had only the tiny parasites on their bellies and not red sores. Later in winter when they spend more time inactive on bottom, they will have the small parasites and red marks  from resting and rubbing the muddy bottom sediments. Dark, muddy bottoms hold warmth, pretty much the only source of warmth left in the bay during cold periods unless they are in a deep harbor or channel where deeper water is typically warmer than the shallows.

Given opportunity to continue fishing through the seasons I hope to continue learning more every day. Try to pay close attention to details such as I have described here. I have been guilty and probably overlooked many signs in years past. Every tidbit you can cram into your quiver of knowledge can prove useful in your quest to become a better year-round angler.

Our fishing has been good for most all species. Having said that, though, the trophy snook fishing we enjoyed through much of summer and early fall is coming to an end. Once the water temperatures drop, which they have already been doing, the snook will vacate the flats and seek warmer water.  Hopefully they will be back and bigger than ever next summer.

I’m still fishing shallow, tossing soft plastics on light jigheads. I’ve been on the KWigglers 4-inch Paddletails and Willow Tail Shad about 70% of the time.  I like the Ball Tail Shad, but only when fishing deeper than three feet or so.

We can expect tides to continue to drop as successive cold fronts pass through the coastal region. This will concentrate the fish into deeper, low-lying areas. Slow your approach and work more methodically. Patience is the byword.

A quick announcement; Captain Ernest Cisneros and I will be giving a presentation at Fishing Tackle Unlimited’s Gulf Freeway location on Saturday, December 14, 2019. We have dedicated several days to comparing notes and ideas and condensed it into Power Point format. We are very hopeful you will find it interesting, entertaining, and informative. Our goal is that you will be able to take away  something you can use while fishing on your own this winter.  Stay tuned for more details.