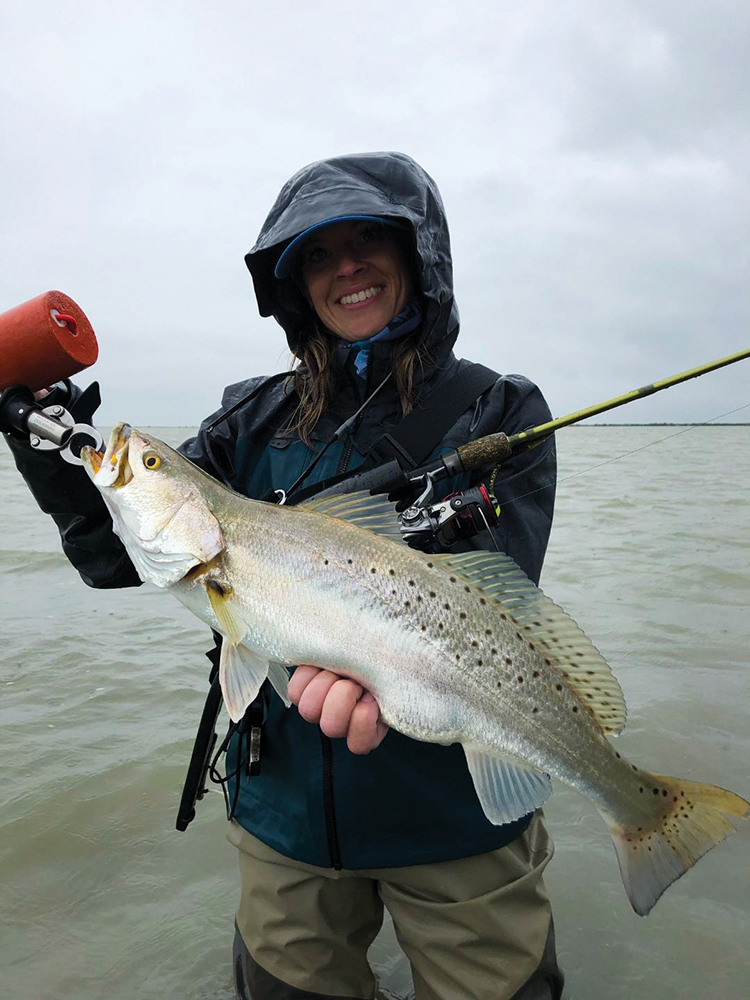 Greetings from Port Mansfield! If you remember back in early November we had a very cold norther come through that made everyone think an unusually cold winter might lie ahead. Well, that hasn’t happened, so far anyway. The fronts that followed in November and December didn’t pack near the punch.

February is generally the month when trophy trout enthusiasts begin to get really serious. The next couple months or so will be our best opportunity to catch a lifetime fish. But, like everything else truly worth achieving, lifetime fish must be earned. Sure, some get lucky – take the first-timer on their first wade trip getting a thirty-incher. Yes, it does happen occasionally but most of us have to dig deep and earn that special fish.  With increasing numbers of anglers on the water I’d say it is becoming an even greater challenge to pull it off. So, a more strategic approach to this quest is what I have been deploying with my big trout trips.

In my last article I mentioned not having to be in your fishing spot before sunup; unless of course you need to secure your footprint in a certain area. I like to lean on the side of strategy rather than bold moves, but rest assured depending on the circumstances we sometimes must get out early. Having said that, let me expound on a strategic approach from a recent trip.

I had one client and we left the dock at 9:00 AM. We arrived in the area I wanted to start but there was an unfamiliar boat with waders fishing. I dropped the Power Poled about a mile away and started to retie leaders, going through my tackle bag, and basically just piddling with gear. My client asked, “Are we going to fish or what?” I told him to just relax and be patient. I could tell the other group had been in the water a long time, likely before sunup as they were quite a distance from their boat. They picked up and left after about 45 minutes. You see, the bite was dead and there was no current, very little wind, and you just feel the fish were not in an active or feeding mood.

I eased in. We slid into the water and slowly started to pick apart potholes, grassbeds, and each flicker of bait with plastics. We were accurate with our casts and within about 30 minutes we began receiving light taps followed by explosive eruptions and heavy fish. Albeit, most were redfish, but for the rest of the day we landed over 60 fish between us. My client was thrilled to no end and at the end of the day he told me it was one of his best trips ever. More importantly, we walked fewer than 100 yards from my boat. Something else worth noting about being there nearly eight hours – you can observe the bay come alive, go dormant, and come alive again. You see current lines developing you wouldn’t normally notice if you spent only 30 minutes or so. In the eyes of transparency this strategy is not one to hang your hat on, but it’s the one I used because I knew the fish were in the area. Timing is often more important than jumping from spot to spot.

As you may have guessed our redfish catches are awesome right now. We’ve also had a few good trout in the mix with two clients landing personal bests. While scouting recently I saw a trout that was in the eight to nine-pound range coupled with a few in the five to six-pound range. I believe we will begin seeing notable trout catches very soon.

Our topwater bite has been relatively slow with our best catches coming on soft plastics.  KWigglers Ball Tails in Lagunaflauge has been our best bait by far, even in shallow water. Next to that would be the Willow Tail Shad in the same color. We are fishing very shallow, knee to thigh, bouncing the baits along the bottom. More aptly, you have to dance the plastic in about six-inch increments. The bites have been soft, some merely feeling like being hung in grass. If you find yourself in this scenario give a mild hookset, you soon will know if it’s a big trout or red.

Fish should continue to pack on weight through February and into March and April. If you want a lifetime trophy the window of opportunity is now open. Don’t let it pass you by.

Remember to practice conservation at every opportunity and be good stewards of our resources.