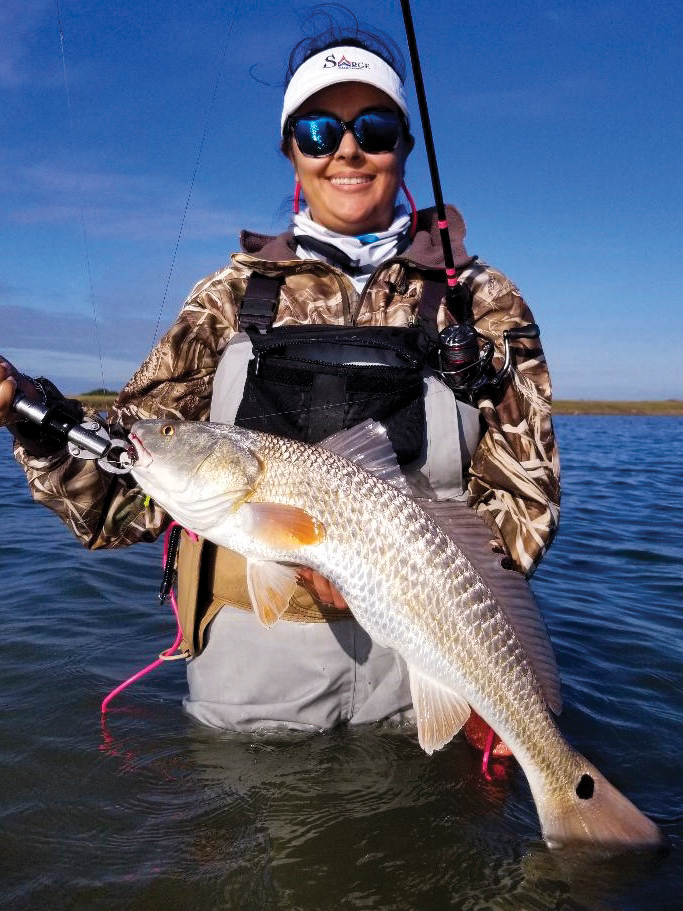 Michelle Lucio with a solid red on a crisp post-norther day.

Happy New Year from Port Mansfield! It has certainly came around quickly. With that said I also want to say our fishing has been steady the past month. One caveat would be the early arrival of some pretty substantial cold fronts. What is more interesting is the immediate return of strong southerly winds (30 plus mph) in the wake of those fronts. This reminds me of a late-winter weather pattern rather than an early one. Lower Laguna tides have continued to run on the high side. We’ve yet to see a true dump of water but I suspect it could happen any time now.

Weather patterns and high tides have been dictating my daily fishing plans – setting up on humps and rises in the bay bottom near drains that have quick access to deep water. When fishing during a warming trend following a cold snap, with light to moderate wind, consider targeting a large flat littered with numerous potholes.  Fish will almost automatically move to the flats when the barometer settles and temperatures begin to rise.

We have heard it many times about wintertime fishing; fish slow and then go slower. Let me expound on that just a bit. Glenn Ellis is on the cover with a true double-digit trophy and I want to describe the strategy we employed that day. We arrived to our spot about forty-five minutes after daylight and I discussed my plan with Glenn and Patrick to cover about 500 yards, moving forward very slowly, carefully picking apart every piece of structure – grassbeds, potholes, or any flicker of bait. They followed my lead and executed the plan flawlessly.

We started our wade about 7:45am and finished a little after 3:00pm, just to give an idea of what I mean by moving slowly. When we finished, we repositioned and began another wade at a slight offset to the original. The area had been “fishy” several days and I was reluctant to leave it.

As noted in the caption of the accompanying photo, Glenn landed his first personal best of that two-day trip on the second wade. Glenn’s trophy that appears on the cover came on the second day. Again in the afternoon and remarkably on his final cast. It was a couple of days before full moon. We followed the same plan as the first day; move slowly and cast to every piece of structure or bait movement within reach. After landing that double-digit trout Glenn simply sat in the boat and grinned from ear to ear.

The same as with Glen Ellis, my strategy this winter will include fishing slowly and carefully, tossing KWigglers Willow Tail Shads and 4-inch Paddle Tails. Lure colors will be selected based on water conditions and clarity. Water depths will dictate whether we use 2/0 Spring Lock Black Nickel jigheads in 1/16 or 1/8-ounce. I’m a big believer in the ability of the smaller 2/0 hook to gain solid hooksets, especially when the bite is less than aggressive. Where the grass becomes thick, with only a few potholes, I generally recommend the Willow Tails rigged on the 1/8-ounce, 5/0 Willow Maker Weedless Hooks. This combination is virtually 100% weedless and allows swimming the lure through just about any amount of grass without hanging up.

Our redfish bite has been very steady, most of which are coming from potholes in knee- to thigh-deep water. KW Paddle Tails and Ball Tails have been the go-to baits for these bruisers. Even though we have had an abundance of reds on the flats recently you still had to work the bait relatively slowly to get them to take it. The bite is often only a light tap, but hang on when you set the hook. That light tap usually turns into a line stripping brawl that has been testing the drags of our Shimano reels to their fullest. You can expect this pattern to remain in play when high barometric pressure dominates the weather pattern the first day or two following a norther.

As we move forward keep in mind this is winter fishing, unless you feel you need to beat someone to a specific spot, you don’t need to head out before dawn. I’m typically in no hurry; I’ll enjoy an extra cup of coffee and basically just ease into a more relaxed day of fishing. This is another reason why winter is my favorite time of year.

In closing I want to again wish everyone a Happy New Year and I hope you all get to fish as much as your dreams allow.  Remember to stay safe out there and practice good conservation to help ensure healthy fisheries in the future.