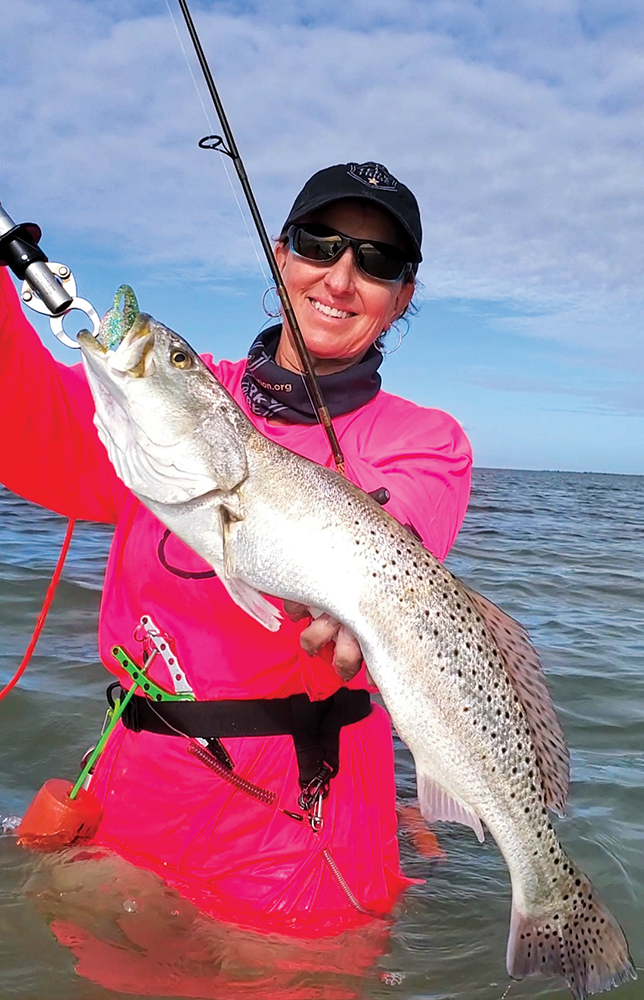 Kimberly Terk with her personal best on the final day of wet wading, Thanksgiving weekend 2020 – CPR.

Greetings from Port Mansfield! We are finally beginning to experience cooler weather. I say “finally” because we fished without waders through Thanksgiving weekend. Also of note, our tides have remained higher than normal, right into December. As northers become more frequent we should start to see lower water levels on a consistent basis, which can help concentrate fish, somewhat. I have, however, accepted the challenge of hunting for them in not-so normal locations while the water has been high. This has opened my eyes to new areas and new opportunities and has been rewarding with some great catches.

Over the last 45 days we have witnessed a couple of cold fronts immediately followed by rapid warming trends. This was an excellent opportunity for me to witness the eating, or “gorging” cycle of feeding, particularly noticeable in trout. The water temperature touched 60° and, sure enough, the trout looked like footballs. As the water temperatures rose over the course of a week the fish thinned out. As another cold snap came through the fish gorged again, thus leaving them a little stockier than the previous time. As I watched this unfold, I recalled a conversation I had with a potential client recently. He asked a question that every guide that targets trophy trout has heard many times; “When is the best time to catch a trophy trout – a heavy 30-plus incher?” Well, let’s explore my thoughts and I will describe three scenarios…

Scenario #1 – I believe it possible that a genetically-gifted 30-plus trout could attain its heaviest weight after the first several cold fronts – based on their tendency to gorge on big mullet.

Scenario #2 - That same 30-plus might attain even greater weight in early spring, based on the weight of eggs alone, just before her first spawn.

Scenario #3 (best-case) - That same fish eating from the first cold front through its spawn; with the caveat that we had a cold snap about two days before she spawned, gorged again just before you showed up. This equates to capitalizing on both egg and gorge feeding weight gains.

I have seen the “best case” scenario play out only once and it was during an epic two days of fishing with numerous large trout landed. The timing couldn’t have been better, and the highlight was the 10.25 pounder landed by Glenn Ellis of Mississippi. Having said all this and based on what I know, I’d take any of the three scenarios. These opportunities can occur anytime between December and mid-April. I will add that your chances under Scenario 3 increase significantly between late-February and continue through March, in my opinion.

The next question from the potential client was, “What are my chances?” In full disclosure mode we must consider a wide range of variables, but let’s just touch on a few that we know can impact your quest. There are fewer than 3% of these “genetically-gifted” trophies out there to begin with, plus we have to consider the fish, or YOUR fish, does not get caught somewhere along the way and not released.  Also, weather plays a huge role and weather is unpredictable. However, one thing is for sure, we know we have a window of opportunity and we know it can occur and often does occur each year for many anglers.

Remember, a personal best is just that; a personal best for YOU. That is the goal and, if reached, we can then move forward to push the bar even higher. Oh, and in case you were wondering, that guy never called back after picking my brain for 30 minutes. Makes you wonder why he called in the first place.

During the coming winter months I will be focusing on flats with scattered grass and potholes near deeper water. Other prime area will be boggy drains that lead to flats. I will also keep an eye on small points that lead to small coves.

Our most reliable baits have been KWigglers Willow Tails (about 90% of the time) on light 2/0 black nickel jigheads. The rest of the time we are throwing topwaters, KWigglers Ball Tail Shads and 4-inch Paddle Tails. Colors have varied but Bone Diamond, Turtle Grass and Tide Runner have been hot in the Willow Tail. Lagunaflauge and Strawberry Cool Tip have been consistent with the Ball Tail.

I want to wish everyone a Happy New Year! I am so looking forward to 2021! Stay safe out there and remember to practice conservation because you never know…you may be releasing your next personal best, or someone else’s.