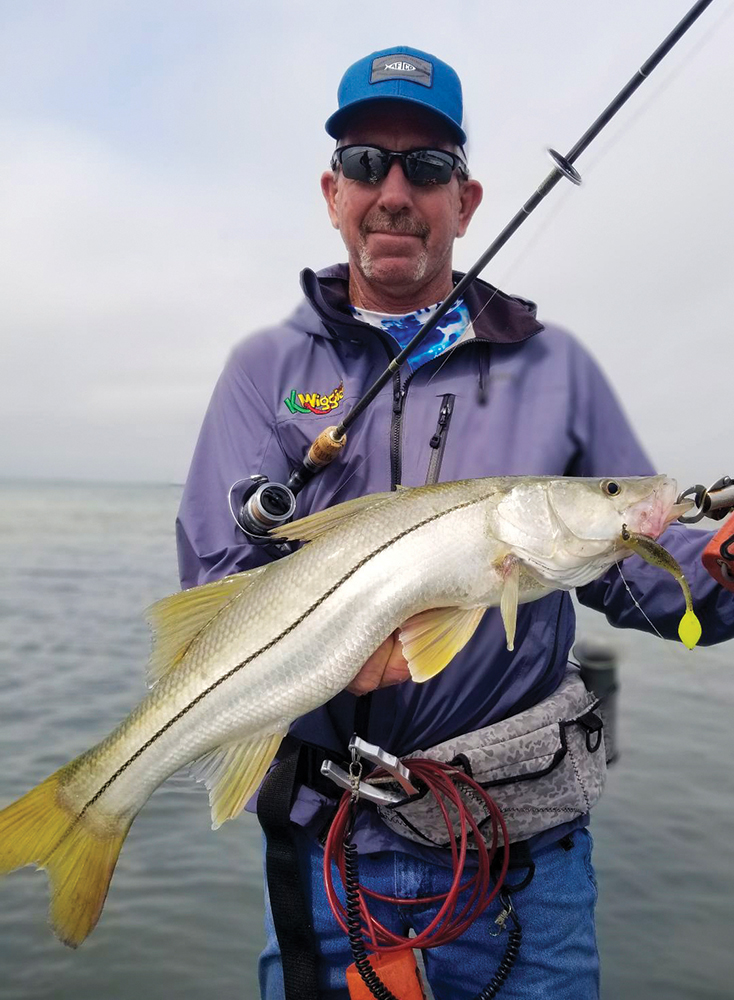 Todd Koenig was happy to land this snook recently on a KWigglers Willow Tail Shad.

Greetings from Port Mansfield! I heard a rumor we were in the running for Windiest Fishing Village on the Texas Coast last month. If you have fished anywhere on the Lower Laguna recently you can probably relate.  Fishing in 30 mph sustained wind can be frustrating, especially if the water is muddy. Lucky for us, water levels were running unusually high, thus keeping some of our water clean.  We have an excellent water filtration system down here; it’s called seagrass, and we have lots of it.  We keep our sanity because we can see clear water in high winds.  That doesn’t necessarily mean we are catching fish in clear water, but it is pleasant to see while cruising the flats. On the contrary, if our water levels had been extremely low during that windy period the majority of the bay would have been a big mud puddle.

So, what are we doing to catch fish in windy situations?  It’s really pretty simple, we go fishing and fish the same areas that hold fish when the wind is down and the water is pretty.  We just have to adjust our mindset and understand that fish still eat when it is windy, even if the water is murky. Albeit somewhat of a mental challenge but we are having some good catches under windy/dirty water conditions. On this topic it is important to capitalize on major and minor solunar feeding times, putting forth our best efforts during the predicted peaks. During off times, slow down and don’t work so hard. Take a break, relax, and watch the wind blow.

Just about everywhere we go we are seeing bait and lots of it, which is a good sign. But not all areas holding an abundance of bait are holding gamefish. When I believe trout and reds are in the area I work bait lines and bait balls from the perimeter, making the occasional casts into the schools of mullet.  The most consistent bites are on the perimeter but every so often we are catching large loner trout under schools of horse mullet by letting the soft plastic flutter slowly below them. The last thing you want to do is foul-hook a two-pound horse mullet.

Flounder landings have been good to excellent lately. Just about every trip one lucky angler catches a flattie and the average weight is running around 2.5 pounds – just right for a tasty fish dinner. Another species worth noting is snook. As of this writing we have hooked and landed a couple of nice ones up to 27 inches. We are not specifically targeting them but I often put my groups in areas consistent with snook habitat if they can handle it, meaning able to wade boggy bottoms. Keep in mind these areas are also good for trout, reds, and flounder so it’s a win-win if one is hooked and landed. Mid-July to August I’ll be back checking areas where we caught snook over 30-inches last year and I’ll be anxious to see if they have returned.

As you might have guessed, our topwater bite has been on hold recently but that should be turning around as the winds diminish in July. Anticipating more frequent topwater opportunity with less floating grass, I will rig a medium-light action FTU Green Rod with a topwater and a light action Green Rod with a KWigglers soft plastic. Assuming that my guess about the grass problem proves accurate, my first casts of the day will be with either a Heddon One Knocker or the new Colt Sniper from Shimano. I’ll be targeting shallow flats early if the wind is up while southerly breezes less than 10 mph will send us to spoil humps and ledges close to the Intracoastal.

I’m happy to report that interest in our Empty Stringers Catch and Release Program remains strong and it is gratifying to see accomplished anglers wanting to participate. Good anglers see the pressure on our bays. They see the kill tournaments being conducted with no cap on trout length and the number of mature spawners being brought to the scales in those events.

Good anglers are motivated by a higher level of stewardship. They take action by controlling their own actions. The handwriting is on the wall; we will either voluntarily conserve our fisheries or we can wait for new trout regulations to dictate greater conservation. Sadly, by the time that happens, we will be in full-blown recovery mode and will have missed the chance to do the right thing on our own.

Until next time, stay safe and be courteous on the water.