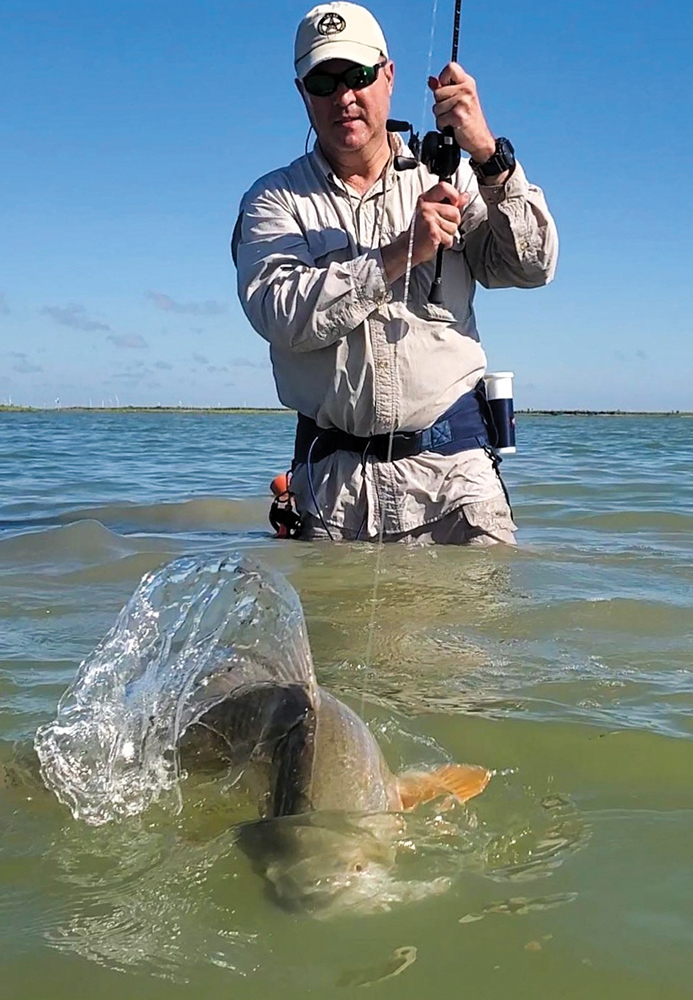 Greetings from Port Mansfield! I would like to start by saying we are in full summertime fishing mode. More boats, more anglers and sometimes, more frustration…if you let it get to you. I admittedly have caught myself getting a little frustrated when a group of fisherman drift within casting distance of my group. Or, when the day before you were working a small area and a boatload of fishermen cruised by, only to find that same boat there the next day with waders spread from here to there and beyond. What is more astonishing is seeing a guy on social media holding a big trout – with that same boat in the background – all in the same day. But this is time in which we live so you just have to move beyond such annoyances and think instead on having peaceful summertime days on the water. Challenging, but it can be done.

Our water levels remain high, which can lead to some exceptionally good fishing. There are signs that the winds are diminishing and we have seen a few nice mornings that allowed fishing areas that would normally be blown out. Not blown out by way of muddy water, I will fish the dirty stuff, but by way of rough water conditions. We enjoyed great topwater action in the calmer conditions, lots of plump 20-inch trout.

Our water is in great shape and I thank our plentiful seagrasses for this. Now, with all the good the grass does for our bay system there is also a drawback – floating grass.  Again, an opportunity to overcome the challenge. Going weedless is the best approach. Heck, it is the only approach if you want a shot at a fish. I’ve touched on all this before but it doesn’t hurt to remind folks you can catch fish when there is an abundance of grass, either floating or submerged. The Willow Maker Jighead was designed specifically to combat this problem and works pretty darn good. I have been rigging it with a KWigglers Willow Tail Shad, usually with the 1/8-ounce, since I am generally fishing less than thigh-deep water.

Since our tides are currently high I have been able to avoid much of the boat traffic by working smaller back bays and lakes. Right now these backwaters are full of mullet and shrimp, more than I have seen in a long time. These areas are super shallow with a lot of subsurface grass that hold bait. For the record there are not a lot of big fish in these areas but there are a ton of good 16 to 19-inch trout with the occasional four-pounder.  The reds are also in the lower-slot lengths but, redfish, nonetheless. One day we had horrendous winds and as I cruised one such area I was pleasantly surprised to find small flocks of seagulls covering both bait and gamefish. I was expecting reds but most were those nice eating-size trout I mentioned earlier. I staged upwind and dropped off two younger men while their dad and I watched them work those pods of fish until they were tired. One told me he finally quit at 17 trout. The last four to five trips I have been totally alone in these areas which takes me back to my opening; peaceful summertime days on the bay can be found.

As we move forward, I look for this pattern to hold as long as the tides remain high. As the winds begin to back down, I will also work those other areas noted above which contain sandbar and gut structures. One interesting observation worth noting; the last few months I have mentioned potholes and how gamefish often utilize them when feeding. However, the last few trips I have noticed my anglers having a little more success working edges of long grasslines than scattered potholes. Maybe there’s something to this and maybe not, but what I can say is that taking advantage of such subtleties can turn a fair day into a great day. Furthermore, you can apply what you observed on following outings and see if you have identified a pattern.

I would like to welcome all to the 46th Annual Port Mansfield Fishing Tournament to be held July 16 through 19. We have both a bay division and offshore division. What is even better is that we have modified the bay division to a “Blackjack” format. This makes it both challenging and fair for every participant. We will also have a live band, awesome raffle items, and its sure to be a blast. You can review the rules and register online at www.portmansfieldchamber.com

Until next time, stay safe and be courteous on the water. -Wayne