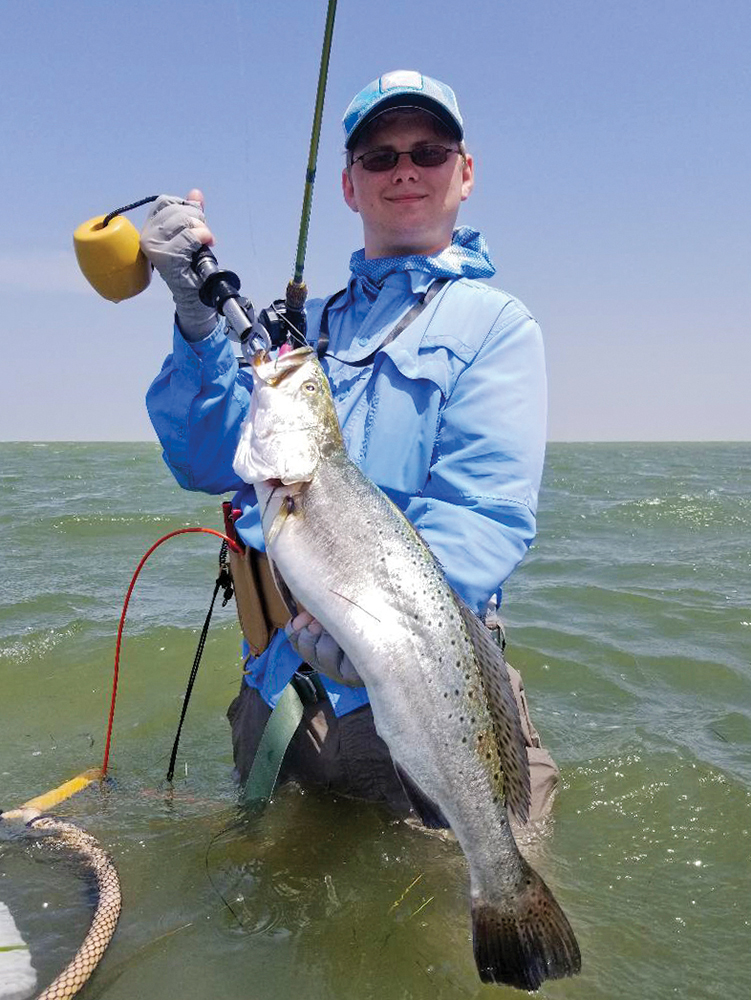 Greetings from Port Mansfield, where I’m happy to report its officially time to clean your Simms waders and store them until fall. Done properly, a good spring cleaning and storing correctly will extend the life of your wader and prevent leaky surprises when you least expect them next fall. Check out Simms Fishing on the web for best cleaning and storage practices.

Now let’s talk fishing.  Our morning water temperatures are hovering around 73° to 74°, which might sound a little cool for wet wading, but you get used to it relatively quickly. Come mid-afternoon the water has warmed into the upper-70s to around 80°.

Early morning; baitfish are as thick as I’ve seen in the clear shallow flats where you can literally find rafts of mullet stretching hundreds of yards. This is an interesting talking point – I recently fished an area full of mullet early in the morning, just as the sun was breaking the horizon but, to my surprise, we only landed a couple trout, not what I expected. So, after an hour or so we moved on and fished out the day.

The next day, same scenario, but to avoid being fooled again I went with another “first spot” and we enjoyed a good early morning bite tossing topwaters and plastics. By the time we finished up it was mid- to- late morning and the wind had picked up substantially – as it does in Port Mansfield this time of year. We had to drive back by the area where all the mullet were spotted the day previous, but now I noticed they were not active, but just milling around subsurface, which is common.

Just as expected, a distinct color change had formed just outside the rafts of mullet as a result of the 20+ mph SE winds. I thought to myself, I bet those reds and trout are staging in that dirtier water, so we decided to fish just inside the murky zone. They were there!

What I learned in the days that followed is that the gamefish were always out there, just outside that gin-clear water, even in the mornings. This pattern worked wonders for me and my groups because we would simply start our mornings in the murky water, just outside the bait, not in the midst of it. Keep in mind this pattern is variable, sometimes the gamefish are intermingled with the bait, you just have to explore both zones if and when the opportunity presents itself.

As noted above our flats have come alive with not only trout and redfish but other “reel screamers” such as jack crevalle. I used to welcome the challenge with these bruisers but nowadays I’d rather not cast toward one. If you don’t get spooled almost instantly you might end up in a 45 minute battle wrangling them to hand. I’ll pass, thank you.

Another cautionary tidbit worthy of mention would be stingrays – lots of stingrays. I had an angler get dinged pretty good last week, luckily (if you can associate luck with a stingray hit), the hit came right on the ankle bone. A painful jab to be sure but the wound was shallow with no barb left behind. He described It like being struck by a hammer, followed immediately by intense burning and stinging. I highly recommend that wading anglers wear stingray guards and shuffle their feet.

Our fish are still coming relatively shallow, around thigh deep on average, even though we are sometimes casting into deeper water. The KWigglers Willow Tail Shad rigged with on the 2/0 size Spring Lock heads weighing 1/16-ounce, or the weedless Willow Maker Jig in 1/8-ounce still seem to dominate the shallow water.  The Ball Tail Shad rigged on a 2/0 size, 1/8-ounce black nickel jighead, is my pick when casting deeper.

The dredging project I mentioned several months ago is now underway. As of this writing the dredge is working just outside the harbor near the ICW.  Although the pipes are well marked you need to be mindful as some of the dredge pipes are just below the surface throughout this area.

In addition to the dredging project is the increase in boat traffic. To put the boat traffic in perspective, I was wading a popular flat on a recent Saturday and counted 28 boats within eyesight – now that’s a lot of boats.

Until next time, stay safe and consider catch and release on some of your fishing trips.