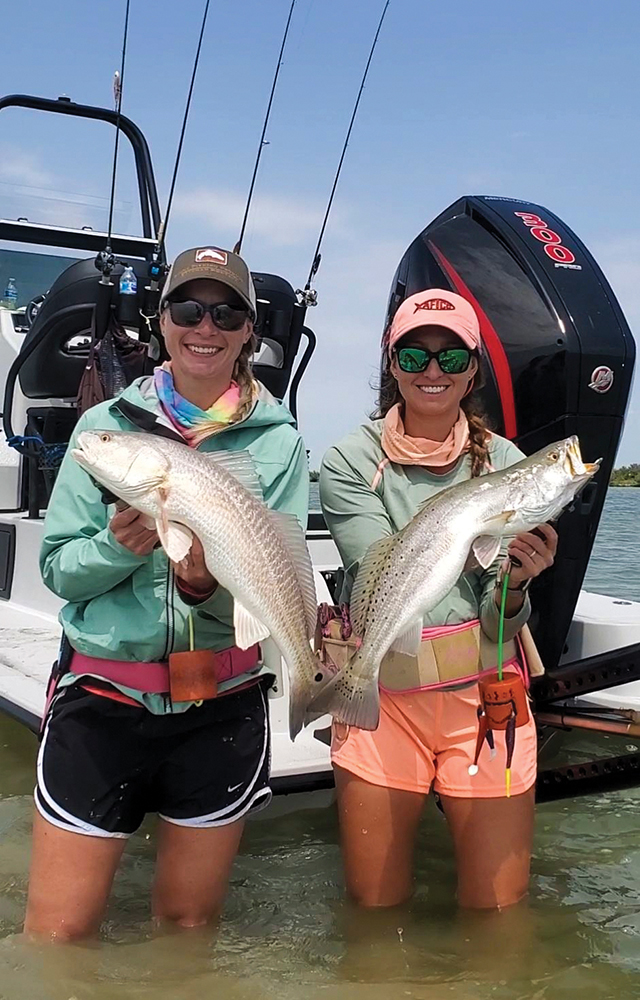 Greetings from Port Mansfield. First and foremost we are happy to report that fishing restrictions have finally been loosened. We were shut down for quite a while and guiding was strictly forbidden – you could fish only with members of immediate household or by yourself. I did just that and it was a perfect time to scout. I ran more than 40 miles one day and never saw another boat. What a rare treat that was.

Boat ramps have reopened and parking lots are mostly full again on weekends, a sign that anglers are coming out of CV-19 lock down in full force. A bit of a surprise actually with unemployment numbers skyrocketing, so many still have money for fishing. Hopefully the rest of the economy will rebound as rapidly.

Lower Laguna water levels remain seasonally high but are no longer rising. Water levels really do not bother me too much; I’ve learned to work with both highs and lows, and can usually find a viable pattern. The winds continue on the strong side but water clarity is holding relatively well in many areas, which boosts confidence for anglers who struggle mentally with fishing the dirty stuff. My advice is don’t let it get you down; cloudy or even dirty water often produces some of the better fish.

I have been concentrating early morning efforts in back bays, working areas of thick bottom grass with scattered potholes. Wading knee-deep, we are relying on small single-hooked topwaters and Willow Tails rigged weedless on 1/16 and 1/8 Willow Maker jigs to beat the grass problem. Putting some serious heat on better fish to prevent long runs and extended fights is strongly recommended to avoid a couple pounds of soggy grass collecting on your line. There is no surefire method for avoiding it, except to land them as quickly as possible.

The difference in fish behavior I noticed during the weeks of social-distancing, with near zero boat traffic and fishing effort, was very enlightening. It has been a while since I have been able to walk within feet of redfish and witness them eagerly take any lure presented. It has been even longer since I have witnessed a dozen or more reds tailing peacefully along mangrove shorelines with small shrimp hopscotching among them as their copper backs glistened in the sun.  Like a bone-dry sponge I absorbed as much of this as I could. I honestly believe that if more anglers could witness nature at this level they might have a different perspective on it all.

In the coming weeks I will begin shifting my primarily springtime fishing strategies to accommodate the patterns fish tend to exhibit more commonly in early summer. Part of this is accepting the fact there will be more anglers on the bay, more boats running around, and more floating grass. I’ll try to get out relatively early and stay in areas longer, and do less boat driving. This works for me in the high-traffic season and by the end of the day we usually have a good mess of fish.

Additionally, with water temps continuing to rise I will begin “spot-checking” a few areas where we enjoyed uncommon success with big snook last summer. Maybe still a little early but when the water temperatures rise to 85° and higher you can bet it can happen just about any day. Those fish last summer were a joy and a blessing and I wouldn’t want to miss a single chance at them.

As some of you may know, I made the switch last year to an SCB produced by Shallow Sport. It was a super nice boat in every way imaginable but it just wasn’t me. I have been a Shallow Sport Classic guy since 2005 but the bug to try a different hull got in my head and I just had to do it. Well, with that out of my system, I am now back at the helm of another 24-Classic.

This one is kind of an SCB-Shallow Sport Classic hybrid in that I convinced Wes and Kyra Hudson to place the SCB console on the Classic hull. This may be an available option in the future, but that will be up to Shallow Sport. There are many benefits to this setup – more to come on that later. I have also made the switch to a Mercury Pro-XS 300. So far this motor has performed flawlessly and has a ton of “umph” with great fuel economy.

Until next time, stay safe out there and practice catch and release whenever possible.