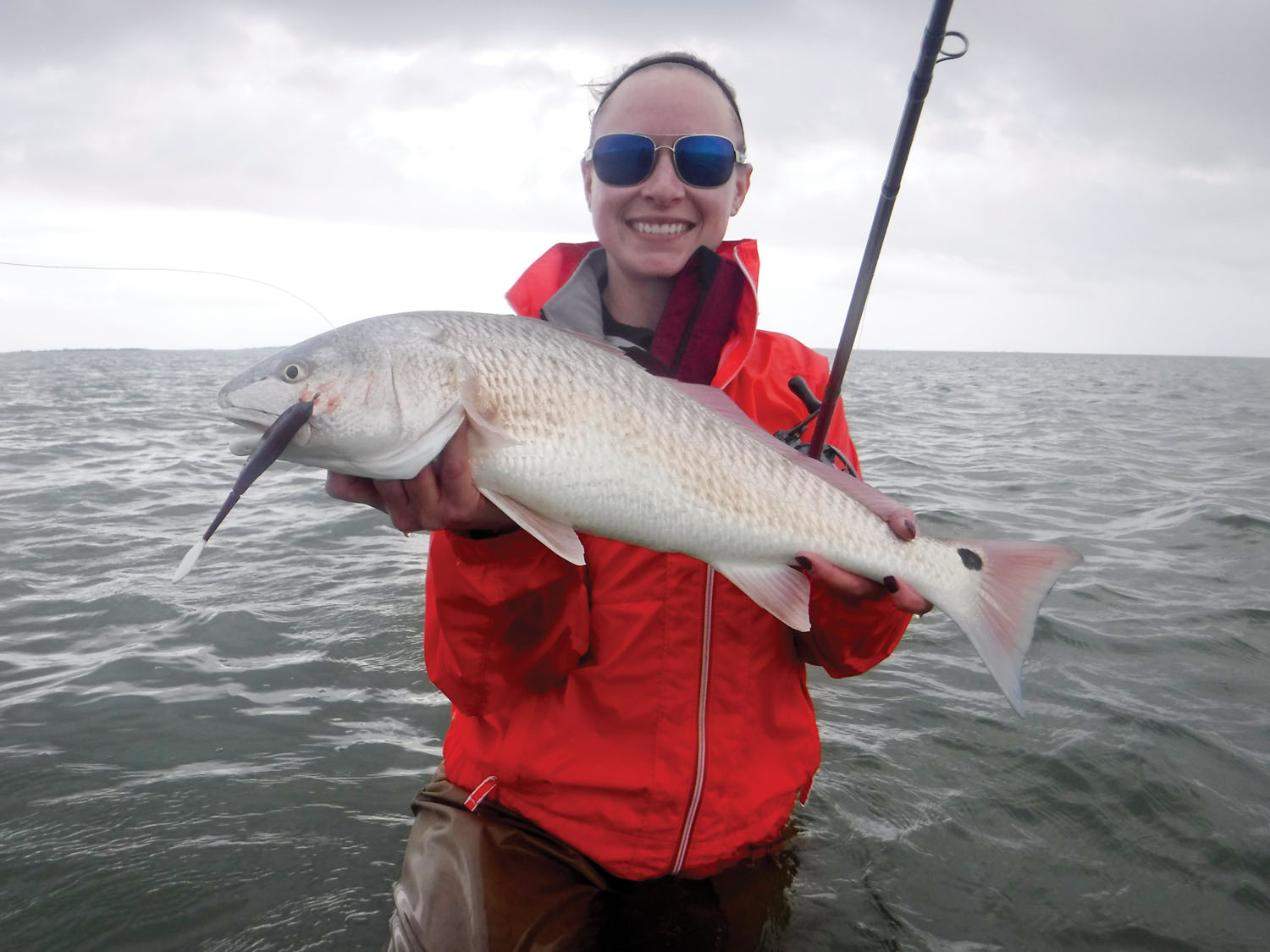 A hefty late-winter red for Erin that ate a Willow Tail Shad; the kind we’ll be looking for in March.

Hello March! This is the month when we begin to see sustained southeast winds; so how should we plan to approach these windy days?

Many years ago, I resented steady 20- to 25-mph southeast winds but I have since learned we can use them to our advantage. Not to be confused with 30- to 35 sustained…know when to say it’s just too strong to fish and safe boating is always your primary concern.

The only serious deterrent this time of year, apart from extreme wind, is when Mother Nature sends us a not-so-friendly temperature-dropping norther and, yes, we’ll likely experience a few.

I have seen this scenario in years past and, as luck would have it, I went anyway – but only after the wind settled to a steady 15 mph. To my surprise, I had my best fishing day of all time. It was Friday the 13th in March 2009.The Lower Laguna had been slammed with a strong, cold norther. It came so abruptly that the fish, in my opinion, did not know how to respond, except thinking it was time to eat, and eat a lot.In fact, on that day, there were 40 trout over five pounds caught on topwaters. That alone would rank as stellar. More on the weather; we had north wind steady at 15 with air temps in the 40s and drizzling rain all day.

My good buddy and former Texas Ranger, Jimmy Schroeder, and Captain Robert Sanders, enjoyed the incredible bite but suffered in the rain and cold. We stayed in the water for hours and videotaped much of it until my old flip-phone’s battery died. You can bet I’ll be headed right back to that spot if that same set of conditions ever come around again.

Currently, the tides have fallen and we hope they stay low for a while. But, sure as spring is coming, they will soon rise again. Until tides rise, we will be targeting deeper areas on the flats for trophy trout while they’re at their heaviest weights.

Water clarity has held up nicely in general but lower tides “dirty up” quickly when the wind cranks. The fish will hold in that dirtier water but trying to catch them on lures can be a frustrating experience.

Now, back to the wind – When it is blowing steady from southeast, consider targeting points that will be swept by wind-generated current. I would start upwind 100 yards from the point and fish methodically toward it along the visible current line. Try the leeward side if that doesn’t produce. One of the two should provide opportunity to set the hook.

Other obvious options during windy conditions will be coves and back lakes. There will be less wind-current in the coves but fishing a calm cove during high wind can be rewarding.This tactic is a great option heading into spring, however, be sure the water level is sufficient to get in and back out without grounding. As the water warms, back bays and sloughs should have glass minnows schooled up along flooded grass flats. Keep an eye open for redfish crashing these micro-morsels along the bank. Small, clear topwaters and soft plastics with lots of glitter are generally good baits for this scenario.

We have been throwing the Willow Tail Shad, a new 5.25-inch soft plastic with a willow leaf tail shape, double-layered hook slot on the back, a shallow hook slot in the belly, and an “action hinge” where the body tapers toward the tail. A nice feature is the ease of rigging it straight – simply use the hook slot as a guide and bingo – a straight-rigged bait.Or, fish it weedless, depending on the conditions. We have been throwing the WTS quite a bit and the hot colors seem to be Red Shad Pro, Mansfield Margarita, Geaux Tiger and Flo-Mingo, all rigged on the small 1/16 or 1/8-ounce black nickel jigs.

We are seeing sporadic spurts of active feeding, but generally the fish are still hugging the bottom.The bites have been subtle and we are still fishing slow.Another confirmation the fish are hugging bottom is by checking out the belly for small parasites clinging there.

Heading into spring, expect longer lines at the boat ramp and more traffic on the water. One thing worth mentioning as you get ready to launch, consider the long line of anxious anglers behind you. Prepare your boat ahead of time and be quick on the ramp. Nobody wants be the guy held up in the line or blinded by discourteous drivers who leave their headlights on.

Stay safe and be courteous on the water.