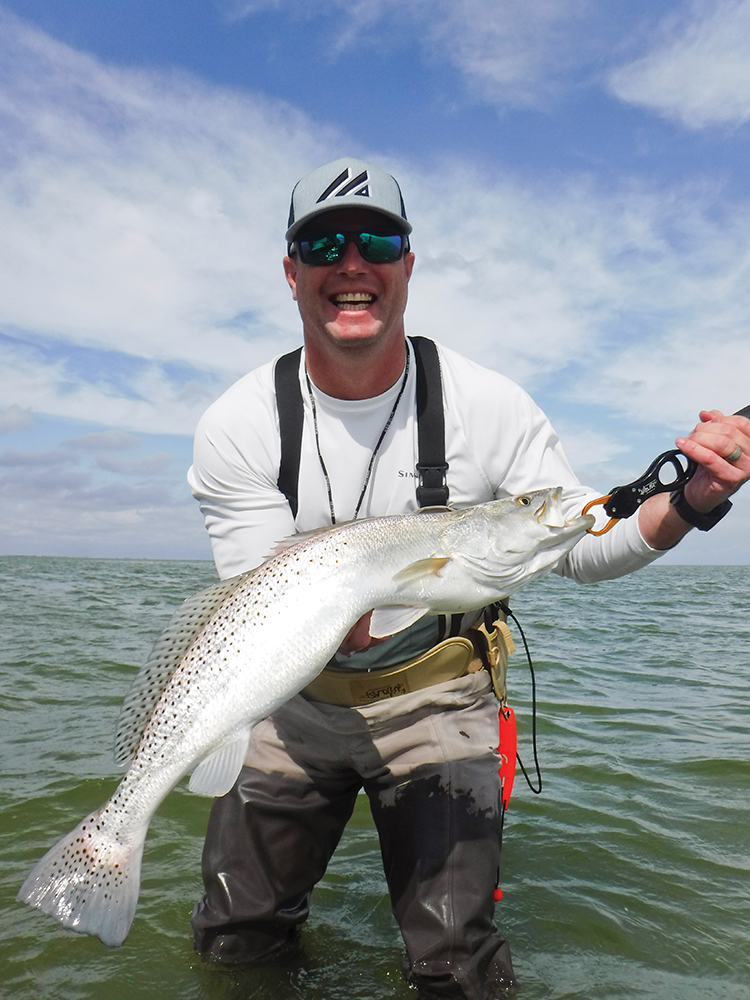 March is such an interesting month; it can be cold, hot, windy, and all the while produce some of the heaviest trout of the year. This was just the case last year when client and friend Glen Ellis landed his double-digit beauty. March is also considered a transitional month, where we go from winter to spring. The degree to which we have to deal with fish transitioning from habitat type to another is also a weather-dependent factor.

February gets lots of trophy trout hype but March also provides legitimate shots at giants. Potential for a lifetime fish also looms in April but, based on results the past couple years, I’m hanging my hat on March for the heaviest weights. Our trout bite is presently very strong and redfish action remains good as well. Trout pulling the Boga to just over eight pounds have been the heaviest thus far but I am hopeful to see some nines and maybe even a legit ten or two here shortly.

I’d like to do a recap of a recent trip where I witnessed how 100 yards can make a world of difference. I was fortunate to have two new clients who I rate as good anglers. We worked through the first half of the morning picking up some keeper trout and reds but nothing real exciting. The weather was not ideal – clear skies and moderately-high pressure had me thinking we likely had our work cut out for us.

We made a move and settled in about 100 yards from another guide (good friend) and his group. He had four anglers and I had three, which some might say tipped the odds of catching slightly in his favor. Structure within the target area was much the same for both groups, depth change might have been a few inches, if that.

Easing out of my SCB we noticed them hooking up; some doubles and one time a triple. We could clearly see they were good fish, some qualifying as big, all of them trout. This went on for about two hours. We stayed with it and had a total of three bites. I caught a keeper redfish and the two new anglers, Brian and Dustin, landing personal best trout. Brian’s was a little over seven pounds. So, it worked out, but just by the skin of our teeth.

This event put my brain in overdrive trying to figure out what was going on. Why were they catching and, more importantly, why weren’t we? They were throwing the exact same baits and we were nearly in the exact same water depth on identical bottom. The only obvious answer was that they were 100 yards away.

Case in point, and I’ve said it before; 100 yards can sometimes make a world of difference. So, next time your guide or fishing buddy wants to wade or drift the same area again and just move over 100 yards or so – I’d say do it!  You just never know.

After we finished up, I walked over and chatted with the other group. They had landed more than 25 trout (no reds) in excess of five pounds with the largest going 7-plus; not counting missed bites and fish getting loose. It’s humbling for sure but better in the long run to have such learning experiences.

I’ll be expecting some breezy days in March, which I hope I can use to my advantage.  Wind-driven current lines, ridges along flats and small drains will be areas I will be focusing on. Additionally, I will be working these areas very slowly with KWigglers Willow Tails and Ball Tails on 1/16 ounce black nickel 2/0 jigs, sometimes 1/8 ounce, depending depths. If it’s cloudy and the water rises above 65° I’ll try a One Knocker to see if I can get one to slurp it under.

The Houston Fishing Show will be at the George R. Brown Convention Center in Houston March 4 - 8. I along with other guides and fishing enthusiasts will be helping in the Fishing Tackle Unlimited booth. I always look forward to this event as it is without a doubt the premier trade show in Texas. I look forward to seeing you at the show.

Fish conservatively. Save some for tomorrow!