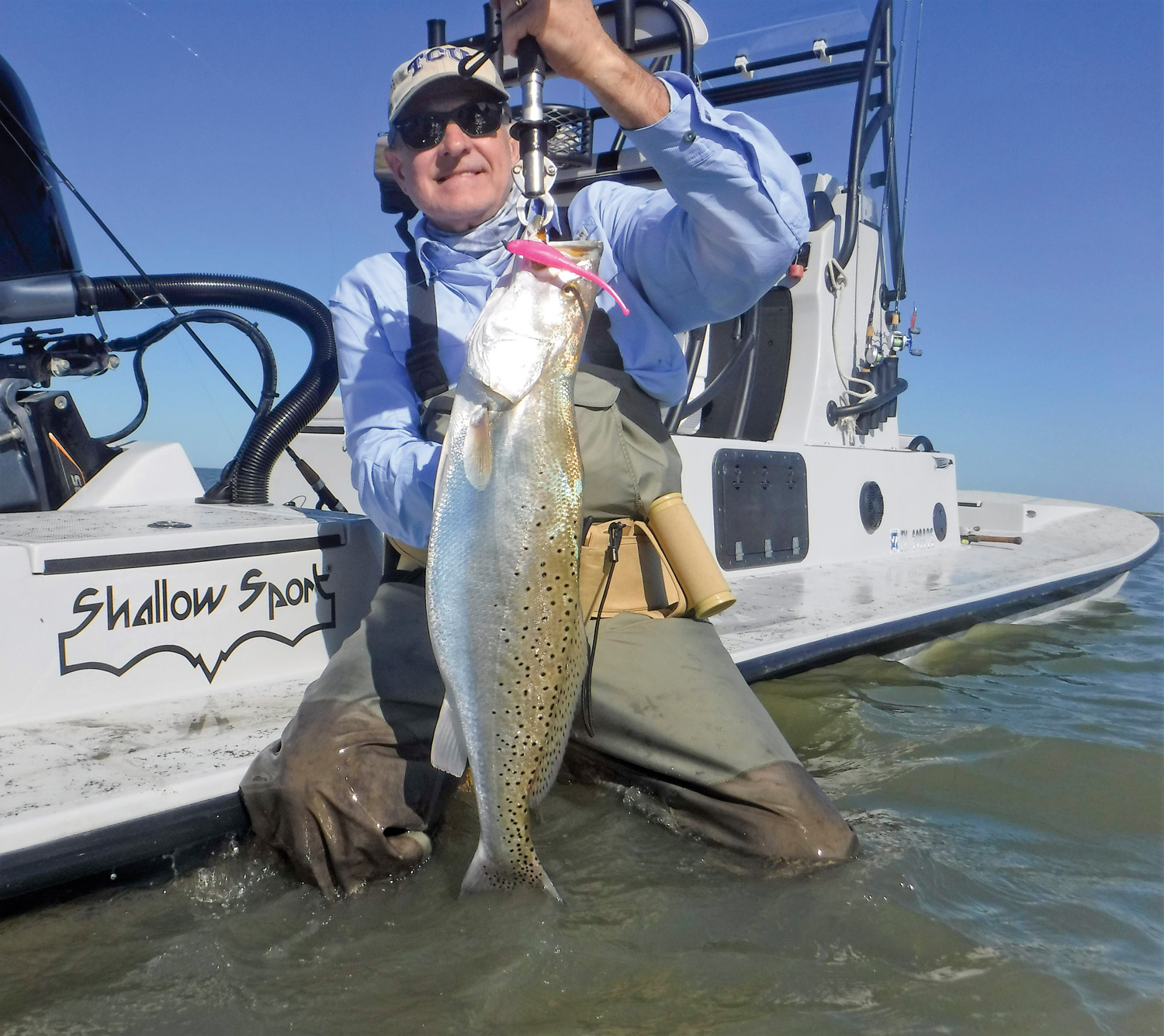 Howdy folks, all is well in Port Mansfield and we’ve already had a taste of summer.Yep, as of this writing we’ve had a couple days of wet wading. I love my Simms waders but it is nice to hang them up for a season. Having said that, there may still be a few mornings when you elect to wear them, but those days are closing fast.

Water levels in Port are currently fluctuating between influences of strong southerly wind and light- to moderate northers. Simply put, water levels rise on strong southerly flows and recede during northers. The change can be as much as 12-inches. Plan your days with this in mind to improve your odds of catching fish. The best tip I can provide is to establish a mark at the boat ramp you use most often and relate that to the day’s water level. This simple tip can not only help refine your fishing plans but save you running aground as well.

May starts the summer fishing pattern that can range from back lakes when tides are high enough, to fishing potholes on the flats and deeper grass lines. Another important variable will be the nighttime radiation cooling and the water temperature. If it is a mild early-summer, the back lakes will hold fish longer than say, in August. If the days are hot and the nights are humid with little radiant cooling, the back lakes will not hold those fish much after 10:00 a.m. I actually prefer those back lakes and sloughs but we have to follow the fish. When they’re out deeper, so are we!

Our trout bite has remained strong and we have landed (and released) some true monsters and personal bests for many. My clients have landed trout up to nine pounds that broke the 30-inch mark, quite a few seven-pounders, and a slew between four and five pounds. I am happy to report that all of those just mentioned were set free unharmed and I have photographed and video-taped most releases.

When the trout are being difficult, we are hitting the flats over grass beds and scattered potholes for hungry reds. Sometimes we have to make long wades to get our fish and some days it’s a little easier but, it’s called fishing – not catching.

Something else we have started seeing are large schools of mullet “dirtying up” the water. Some schools can range in diameter of 200-plus yards and it is distinct, (a large mud boil). Stop nearby and observe for a short period and you should see mullet being busted from hungry reds, trout and other predators. If you have a few people in your group, consider setting up with one or two wading into the dirty water and others just outside. Adjust the plan to whoever catches the most.

Hang on to your rod when fishing this pattern because big jack crevalle can often be found around those mullet schools. We recently hooked two jacks on one charter and I told my guys…plan on a 45-minute fight if you want to land it. We landed one and the other came loose after 30 minutes. If you enjoy battling hard-fighting fish the jacks can be a hoot.

Heading into summer we spend a lot of time in calf- to knee-deep water. This is also the time of year we start seeing bait fish becoming more active, so try to concentrate your efforts where you see life. As the days warm we will eventually find ourselves fishing thigh-deep or even a little more.

Early in the morning I will start by throwing One Knockers if the floating grass allows, and then switching to either a four-inch Paddle Tail or a Willow Tail Shad. It is tough to beat a Willow Tail Shad in that shallow water because of the versatility it offers – natural buoyancy and ability to fish it weedless, if needed. Once it warms up and I head out a little deeper I will switch over to the Ball Tail Shad. For me, the Ball Tail works best in deeper water than shallow. But, saying that, many of our big fish have been landed on the Ball Tail in extremely shallow water.

Just ask Dan Doss who nailed this nice seven-pounder in knee deep water on a Flo-Mingo Ball Tail. Oh, and as luck would have it, this was Don’s first-ever day of wade fishing and he is knocking on 70. Go figure!

Until next time, good fishing and be safe and courteous on the water. -Capt. Wayne