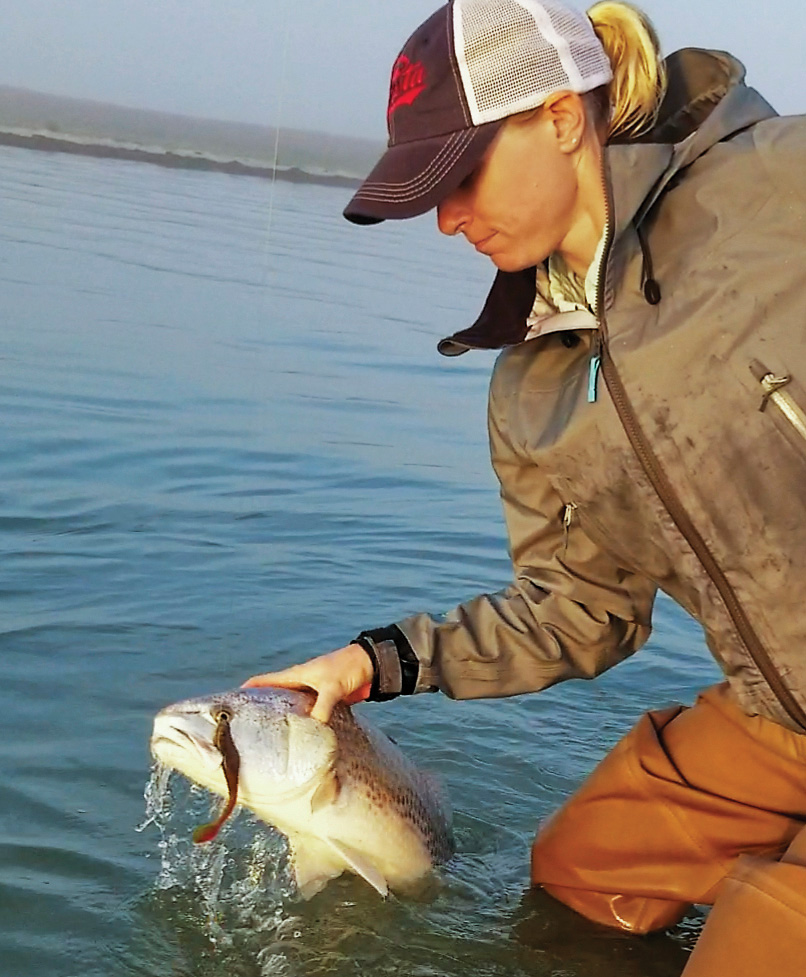 Erin wrangles a nice red that fell for a Willow Tail Shad.

Greetings from Port Mansfield! Fishing has been good the past month but not quite as consistent as I expected.

Example: I had a great group of guys one day and after a full day’s grind we were only able to wrangle in one slot redfish. We were in the “right spots” but the fish were not responding. I believe there are days when fish do not eat; they lie low for whatever reason and absolutely refuse to take a lure. So, believing this, I felt it imperative to fish the following day. My guys were very understanding regarding the tough day we’d just put in and met that reality square in the face with the attitude of, “Hey, that’s just fishing.” But I was not satisfied.

Truth be told, I was quite stern in insisting they go out with me again the next day. It was akin to pulling teeth, but I knew, or at least prayed, there would be a shift in fish feeding behavior.

Working that hunch gave us four trout the next morning longer than 25-inches, some of which were longer than my arm. Heck, one of the guys scored a personal best. Best of all they were learning to use artificial lures, including topwaters. Awesome to see these guys capitalize on lure fishing with the fish responding accordingly.

Tide levels have risen about eight- to ten-inches recently which has broadened the bay just a bit. In my opinion, fish may not move far when water rises but I do think they have to acclimate to the change. Some spread a bit, but I don’t think they initially move too far.

We are throwing topwaters in the morning and sticking with them so long as fish are responding. Always remember there is no reason to change any lure so long as you are catching fish – except perhaps as an experiment. However, having said that, when surface action fades I am not in the least shy to tie on a KWigglers Willow Tail or 4-inch Paddle Tail, if still fishing shallow. If fishing deeper, say thigh deep or greater, I’ll likely opt for the Ball Tail Shad.Best colors have been Red Shad Pro, Bone Diamond, Strawberry-White, and Flo Mingo.

On a side note: I have recently switched the rear hooks on my topwaters. I now use a single on the rear but stick with the treble at the front. It is easier on the fish to remove a single hook, especially if they hit it from behind and end up being hooked deep. Again, just my opinion, but I began this during the winter with slow-sinking soft plugs.

I had the pleasure recently to fish Belize with my buddy Captain Ernest Cisneros, targeting snook and tarpon. We fished backwater rivers, flats, and everywhere in between. I was a guide on a guided trip and I must say I learned a lot. And, for the record, I was vague about my occupation when it came up with the captain. I learned to listen closely, pay attention to what was being said, and accept that the guide knew more than I did in his home waters. Now, in full disclosure mode, I did exactly what the guide told me to do, including casting accuracy that would make the best bass angler envious. However, at the end of the day, I never had even one bump. Captain Ernest was able to hook and land a sizable tarpon during the last 15 minutes of the trip. I filmed and narrated the action. Good job Captain Ernest!

Let me end this article by giving my opinion on Texas fisheries – especially here at Port Mansfield. This small strip of shallow water that parallels the Gulf of Mexico is the best fishery I have ever encountered.

Granted, I have not fished a lot of countries or many other bodies of water, but I have fished a few from Texas to Florida and Mexico, and my most recent outing to San Pedro, Belize. I hear from credible anglers from other places who say we have something here in the Lower Laguna comprised of special and incredible. Flats that go on forever, grass beds virtually untouched, and sandy bottoms without boot tracks. In addition, we have trophy speckled trout, reds, snook and flounder – all within sight-casting range. These places I have visited may have a little bit of each but not all that I have described in one narrow strip of water. Let us all take care of it by considering conservation every chance we get.

Until next time, good fishing and be safe and courteous on the water.