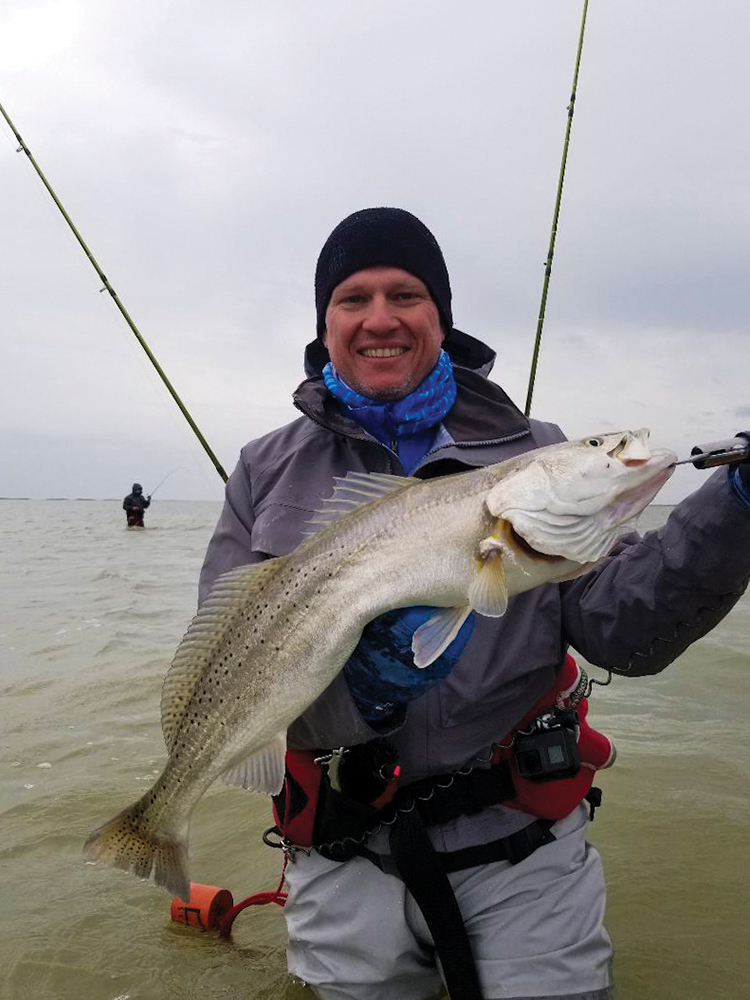 Mike Frazier’s 6.5-pounder measured 28-inches. Fully an inch longer than Josh’s trophy but three-quarters of a pound lighter. I believe this fish had already spawned.

Greetings from Port Mansfield! Before getting into the nuts and bolts of recent fishing and what I believe the month of May will bring us, I want to provide a brief recap of the trophy trout season just concluded and also how the beginning of spawning season came into play.

Fishing got pretty slow the last week of February and first few days of March, especially for larger trout. We found a few but every day was such a grind. We did our part each day, targeting appropriate areas, staying in the water for hours on end, but we were just not finding them as frequently as in years past.

Fast forward to the period of March 16th to 22nd; the full moon came on the 20th. We witnessed a significant uptick in big trout landings during that period. Something worth noting was that we had two warming trends during this timeframe (upper 70s air temp) and we also had two cold fronts come through, the first on the 16th. I am unsure whether it was the full moon or the warming trends, maybe a combination of the two, but I firmly believe we witnessed a profound spawning event take place.

In the accompanying photographs you will see Mike Frazier with what I deemed a post-spawn 28-inch 6.5-pound trophy trout during this week. A few days later Josh Bracke landed what I called a pre-spawn 27-incher that weighed 7.25 pounds. The photographs depict clearly what a pre-spawn and post-spawn trout should look like.

A few days following, during the chilliest days and just before the full moon, some fortunate clients and I landed some of the biggest trout of my career, truly pre-spawn fish and likely about to spawn within hours of the landings – CPR was practiced on all. A few of these larger trout came on topwaters but the greatest majority took KWigglers plastics, some on weedless rigs to combat the suspended and floating grass problem we were dealing with at the time.

More interesting and also notable was that the larger female trout totally vanished in the days following the trophy catches. We found a few four to five pounders but nothing heavier. However, the area remained chockfull of 14 to16 inch male trout…while during the string of “trophy” days not a single male fish was landed.

These are my observations and I offer no explanations. The only thing I’m certain of is that we got on a string of incredible days for trophy-class trout and, judging by the weights of fish landed on successive days, I believe a major spawning event occurred on that full moon. Why the hordes of male fish suddenly appeared is truly a mystery.

Let us now move forward with what I believe we can expect in the coming month.

Late-spring/early-summer patterns are shaping up nicely. We have increased water levels and some good fish are being found up on the shallow flats and in back bays.  There are still those fish that remain out deep on the outer grass lines where drift fishermen tend to do rather well. Quite often the drifters report good catches of reds and trout where waders cannot venture. I elect to target fish that stage and hold in depths of waist-deep and less. Small points along shorelines and back bay drains are producing some small flounder with a few keepers mixed in. I interpret the flounder presence as a good sign for the coming weeks and months; last year at this time we were seeing nearly no flatfish.

We will be dealing with stronger southerly winds which will “dirty” the water a bit in certain areas. I will be concentrating on the color changes as this occurs, spending more time on the dirty side than the clean. If the water is shallow, knee-deep and less, I’ll be tossing the trusted KWigglers 4-inch Paddle Tail to take advantage of the tail vibration. Sometimes that’s what it takes in dirty water.

Last month I touched on the Colt Sniper topwater bait by Shimano. I since have reduced the size and wire diameter of the treble hooks it came with and have noticed an enhanced performance. This bait is perfect for water that has a slight chop, being that it’s voice is neither too loud or too subtle.

I got into a conservation discussion recently and here’s a rule of thumb for anglers to consider. If you have more than three bags of fillets in the freezer, is it necessary to keep fish? Why not have an Empty Stringers trip that day instead? Think about it.

Until next time, stay safe and be courteous on the water. -Capt. Wayne