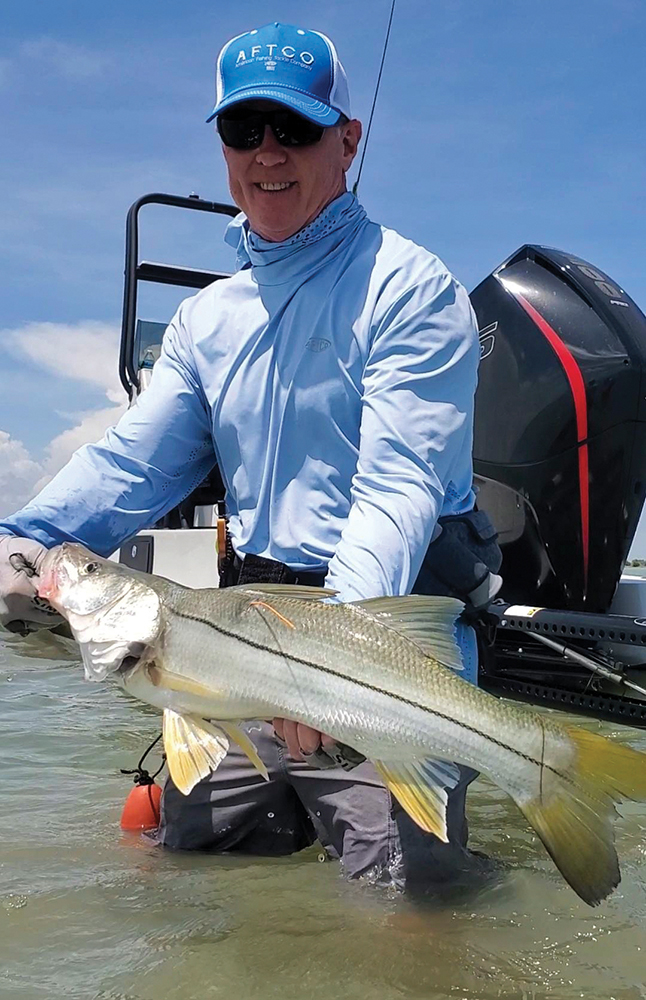 Greetings from Port Mansfield!  As November rolls in we should start to see fewer boats on the water. Many anglers will be gearing up for deer season. I used to play my part as a hunter. From walking miles of corn stubble for pheasants to sitting on a bucket in a sunflower field, from sloshing in the mud at 4:00am to shoot a few ducks and many days in deer stands. The last 15 years or so I’ve been concentrating my efforts wade fishing the Lower Laguna Madre.  I try to be better at one thing rather than average at many.

With that said, I mentioned in my last column that we’d been having a slow year on snook. No sooner than I summitted that article and our snook fishing took an immediate turn. I may have also mentioned, or at least I’ve been making mental notes, that fishing patterns in general seem to be running about a month behind normal schedules. We began catching snook during June last year and our first landing of 2020 came during July. Our snook numbers began to dwindle noticeably during mid-September last year, while we stayed on them throughout the month this year.

I have taken an exceptional liking to snook fishing.  Hands down it is the most challenging fish to target on the Lower Laguna. It is also, by my measure, the most exciting to catch. Their genuinely moody and stubborn nature while making hundreds, or possibly even thousands, of empty casts helps you appreciate the success of landing one even more.

We really do not know how many snook live along our coast, but we know we have them and they can sometimes be encouragingly plentiful. Another thing we do not know is where they live during the colder months. Most, in my opinion seek refuge in the Brownsville Ship Channel. I also believe they migrate up the Arroyo Colorado. Some likely move into the Port Mansfield Harbor. Many of you know I have partnered with Dr. Greg Stunz and his team at Harte Research Institute for Gulf of Mexico Studies at Texas A&M Corpus Christi. I am tagging just about every snook my clients and I have been catching. So, if you are lucky to land one with a tag, please document its length, the location you were fishing, and carefully remove the tag. We ask that you release the fish and make a report to receive a reward.

Our fishing has been running fair to good. Trout and reds have been consistent and about every third or fourth trip someone lands a nice flounder or two.  Flounder fishing should be picking up any day now.  I was fortunate to fish a new group recently, some were relatively new to saltwater fishing and a few had never waded before. We found ourselves drifting after their patience for wading the flats with limited action was giving them a dismal view of the LLM.  We managed to scratch out nearly a limit of keeper trout.  Not being a “drifter” per se, I encouraged the group that we should dedicate the second day to wading exclusively. If nothing else it could be a great lesson into what wade fishing is all about, whether or not we ended up finding some keepers for them to take home. They agreed.

So, the following day we stayed with it all day. Fortunately, we landed some small fish and an occasional keeper.  I could tell when we landed keepers their excitement for being able to “string it up” was very noticeable. After a handful of keepers, I had a “conversation” with one of the organizers of the trip.  I explained the success of a fishing trip is not equivalent to the number of keepers in the cooler.  After a minute of processing this statement she looked at me and could not agree more; she got it.  Strangely enough, moments later she landed her first upper-slot red. It wasn’t the most graceful landing, but it was a catch. Check out Kaitlyn Coufal’s pic to see the excitement.  They cannot wait to get back.

I look forward to cooler weather and with it we can expect our fish to start putting on some weight as they move up into the shallows, gorging on baitfish, and hopefully our soft plastics and topwaters. Our best baits have been the KWigglers Willow Tail Shad and Ball Tail Shad. Best colors have been the good ol’ reliable Bone Diamond.  Stay safe and remember to be courteous on the water.