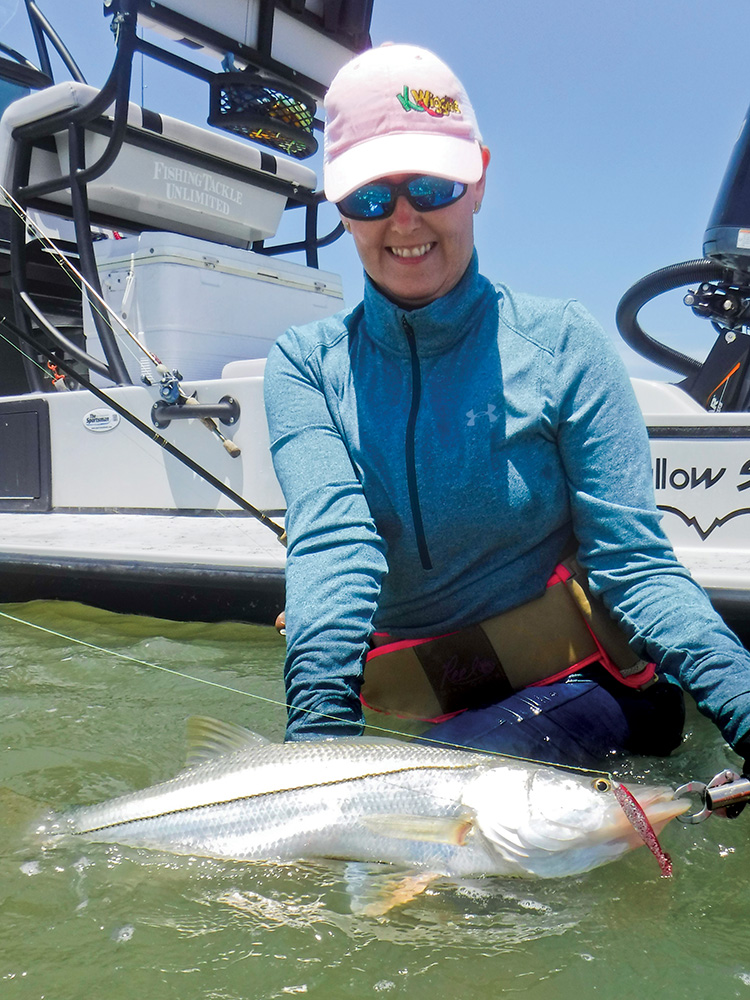 Greetings from Port Mansfield, Texas! As I sit here to write this article I am wondering how one can have the best fishing trip of a lifetime when fishing has generally been slow. Which begs the question – what exactly makes a best fishing trip?

For some it might be as many fish they can legally retain. For others it might be landing one truly trophy fish, or maybe it’s just being able to get away from it all – with or without catching. What about one magical event that occurs during a fishing trip?

Not to discourage or be a pessimist, I mentioned fishing was generally slow because that’s my honest report at present. Keep in mind we still have some outstanding days with trophy catches, but day in and day out we face the “summertime grind” out there on the flats. For the record, the water is in great shape, bait is often found at every stop, but the flats lack the consistent sightings of multiple packs of redfish and the scattered big trout. However, having said all this, there has been a considerable uptick in redfish sightings and landings.

Back to the theme of what makes a best fishing trip; that might best be viewed through the angler’s eyes. I will cite the example of what happened yesterday – one of my absolute best fishing days.

It goes like this. I was given a reliable tip from a good friend and fishing guide that there were snook in a general area, so I decided to investigate with three regular clients. For the record, I know little about snook; only that I have been snook fishing, caught several and, probably more importantly I have received many tips about snook and their behavior from my good buddy Captain Ernest Cisneros.

With that said, I pulled near the area and decided to give it a wade. Within moments I hear that familiar “whip” sound of braided fishing line quickly being pulled tight on a hookset.I look over to see Mike Frazier with his Fishing Tackle Unlimited Green Rod doubled over. Tracing the fishing line with my eyes I watched a large snook come rocketing straight up out of the water and displaying the most acrobatic jumps I have ever seen. I immediately began recording with my camera and after a few minutes it was “picture taking time.”

After a healthy release and quick celebration, the first thing that went through my mind was Captain Ernest telling me, “When you catch a snook don’t move!” I instructed everyone to stay put and for the next two hours we hooked ten snook and landed six!All of these were 25 inches or longer, with the largest going 30.Everyone hooked up and three out of four of us landed what I would call trophy Texas snook. Unsure if this is a sign of things to come or an incredible anomaly, whatever you call it, it was great.So, there it is folks - A best fishing trip when fishing has generally been slow.

Now back to reality.Our trout catches have kept anglers busy but most have been undersized and you must sift through several to find a keeper. As of this writing our tides are again very low after the large influx of water we had about a month ago. As mentioned, there has been an uptick in the redfish action and this should continue as summer fades into early fall. Black drum have been schooling and most of the fish in the schools are perfect eating size. You can fool them with plastics, especially when they are in large groups. I have found a plum-blue metal flake with chartreuse tail works best.

Our three go-to baits have been the KWiggler Willow Tail Shad, 4-inch Paddle Tail, and the Ball Tail Shad.All three have their place in a day’s fishing and I utilize all three. Stick with the Willow Tails and 4-inch Paddle Tails early along shorelines. As you find yourself fishing deeper over potholes and grass lines, give the Ball Tail Shad a try. A few colors worth mentioning are Padre Punch, Texas Roach, Flo-Mingo and Strawberry Cool.You should be able to get it done with those.

Until next time, stay safe and practice catch and release whenever possible.