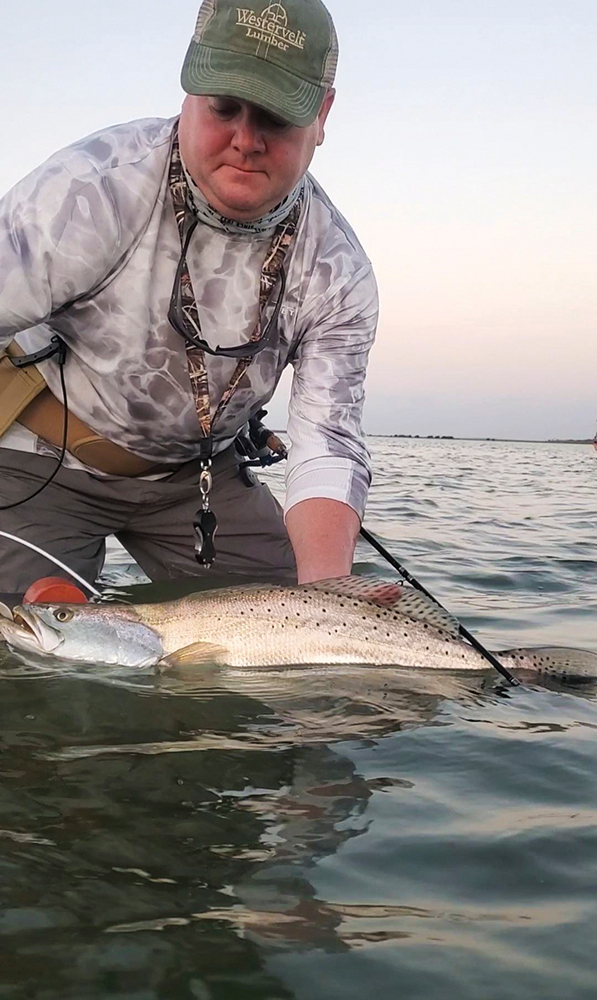 Brett Starcish with a personal-best trout on a recent charter.

Sitting to write this report we are just now recovering from the onslaught of Hurricane Hanna. The storm was not anticipated to be much of anything, but that was far from the case once the results were tallied. In short – Hanna pretty much made a mess of Port Mansfield. Winds were clocked at 91 mph at the mouth of the Harbor, with some gusting above 100 mph at the south end of the Land Cut. Most folks sustained some amount of damage; shingles ripped loose, fences downed, and even complete roof collapses. I rode it out and was fortunate this go-round…unlike Hurricane Dolly 12 years ago.

For the past 45 days and more I had been hunting high and low for those elusive Texas snook. I had a good run last year with the acrobatic fighters but this year had been disappointing. From late-June through the third week of July I had hooked only two and both were lost during the fight. As luck would have it, the day before Hurricane Hanna made landfall,  I along with a good client finally stumbled onto what I had been hunting for. It was a good day, we hooked four and landed three; not big, but they were swimming with some giants that looked to be in the 28-to 32-inch range.

I have learned the past three years snook do not seem to be exceptionally spooky by nature as they will swim within a few feet if you’re wading quietly. They remind me of big trout we see cruising the shallows. Keep in mind, you still need to wade in stealth mode while fishing for linesiders. For the record, on this outing we moved a total of about 80 yards in three hours. A great challenge, even for seasoned anglers, but the rewards definitely outweigh the effort required.

Obviously, we have an abundance of fresh water in our bay and the fishing was tough immediately following the storm, especially in high-runoff areas near the Arroyo Colorado. Focusing fishing effort in  areas with higher salinity increases the odds of having a successful day on the water. I am hopeful we do not lose too much seagrass due to the influx of fresh water. Seagrass is the foundation of the marine food chain here on the Lower Laguna, and it also contributes mightily to favorable water clarity. If you recall our seagrasses took a big hit in the aftermath of Hurricane Dolly.

As of recent we are still seeing bait which tells me we are doing OK. I did note on a few of my recent trips that I was having to fish slower than usual because the gamefish were all close to the bottom.  Whether it was in one or three feet of water the fish were low. This could be because freshwater is lighter and tends to form a layer above the heavier salt water. I suspect this was the case based on the influx of freshwater in the bay.

There have seen some good schools of redfish near the pass and those who like to drift-fish have been successful catching these bruisers.  Most true schools have been too deep for wading anglers to reach, but every now and again we have been able walk into a good pod of them, which is always fun.  Additionally, we have found some nice trout in the grassy shallows. A perfect example of what I am talking about is depicted in the photos where brothers; Brett, with his personal best trout fishing shallow grass, and Brian, who walked into a pretty good group of reds in a large, knee-deep pothole. Those guys worked for them, but that is what some days require.

Best baits have still been the KWigglers Willow Tails and Ball Tails, and for those finicky fish that are not anxious to chase your lure, you might consider the new “Garlic Infused” limited run KWigglers in three colors.  You can find these at most tackle shops, including all three Fishing Tackle Unlimited locations. Speaking of Fishing Tackle Unlimited, their new Green Rod has finally arrived and is on the racks in all three stores. I’ve had a prototype in my hand over a year now and let me tell you it’s a game changer. Very light, super-sensitive and powerful, with carbon fiber split grips and black pearl recoil guides. This rod is in a class of its own!

Until next time, stay safe and be good stewards of the resource.