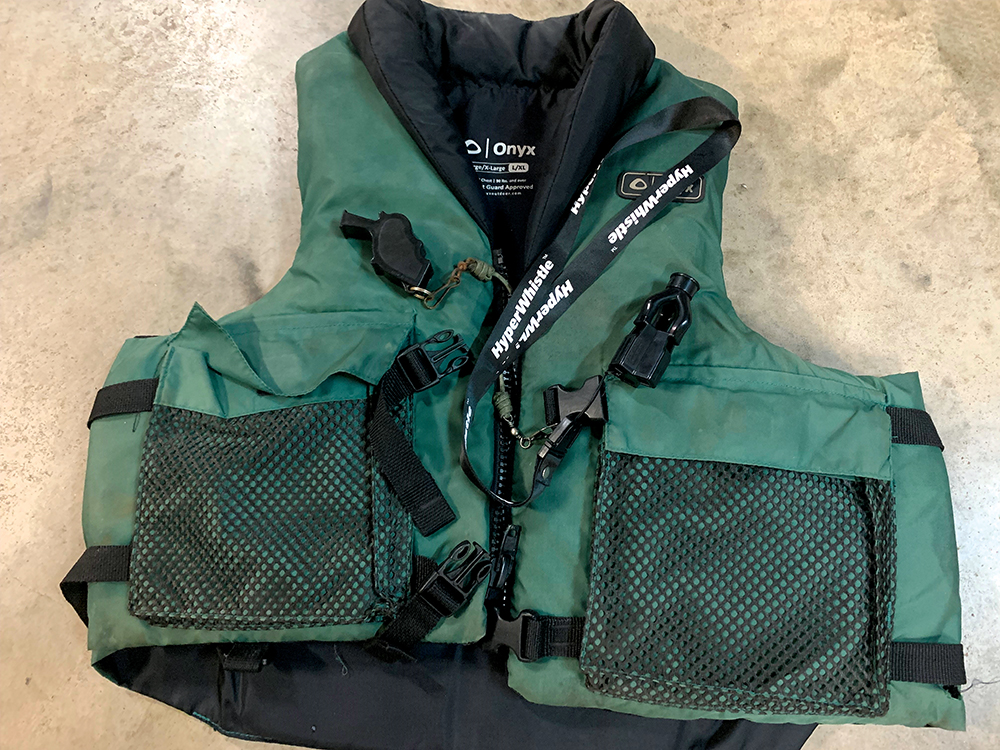 A properly fitted PFD with a whistle attached are necessary gear in all seasons, even more so during winter months.

Right about now you can almost hear the piano music in the background, the intro to Bill Withers’ “Lean on Me” classic hit. The lyrics: Lean on me, when you’re not strong, and I’ll be your friend, I’ll help you carry on…are exactly what the redfish have been singing to me during the winter months for about as long as I can remember. It’s no secret that Sabine and Calcasieu can be feast or famine for those seeking speckled trout during winter due to unforeseen rains and heavy runoff. But just like a friend you can always count on, the redfish will always be there.

During the past five or so years the redfish have really been the savior of Sabine while the speckled trout have been on the rebound following successive gut punches delivered by Mother Nature over that time period. So many drastic weather events: excess freshwater runoff from tropical storms and extreme cold weather that dazed the trout population were but minor inconveniences to the heartier redfish. Like the classic Timex commercial, “they take a licking and keep on ticking.” For many anglers who rarely ever targeted these hard-pulling fish, they instantly became their best friend and the best show in town.

Every winter so many fishermen get their eyes opened to just how awesome these fish really are. In my opinion the redfish deserve much more respect than they are given and should be held in much higher regard. We all know that won’t happen because the speckled trout is the “glamour” species of the Texas coast…that is, until they can no longer be found. Once the conditions make it hard to find trout, it’s amazing how fast catching lowly redfish becomes the best option available.

I can vividly remember catching my first winter redfish like it happened only ten minutes ago. My good friend Chris Gunn and I would probe the Sabine River banks with nothing but chrome or gold Rat-L-Traps in some of the nastiest weather you can imagine. After hard cold fronts when the wind would blow all the water out of the marshes, we would find those redfish ganged up on the first decent piece of structure or around the deeper drains. Thousands of empty casts would easily be forgotten as soon as the first bone-jarring strike happened. In most cases once you found one redfish you would quickly find another, so the excitement level went from monotony to mayhem in mere minutes. That first solid hook-up and the feeling of how much power that fish possessed was eye opening, and that was all it took for me .

Now please don’t get me wrong, I love chasing big trout. In fact, I am insanely jealous of all those folks on the lower coast who are enjoying a great revival of sorts as better trout are becoming more and more common. The freezes really did a number to that population and it’s great to see the rebound that appears to be happening. In my part of the world I don’t have that luxury, so I have to play the hand I am dealt, which means switching targets and tactics. Regardless of the weather, runoff, and most any other variable, the redfish will remain constant and that’s exactly what makes them a favorite winter option.

I’m sure many of us have at one time or another cursed the redfish for ruining a good trout bite or tying your favorite Corky into a knot; we’ve all been there. In most cases the disdain for the redfish is due to the fact that we are seeking speckled trout. When we actually target redfish instead of running from them we begin to appreciate them in an entirely different light.

Easily the most exciting way to catch these fish is on some sort of topwater plug, of that there is simply no room for debate. The violence that is displayed by the redfish when eating a surface offering is like no other as they have to basically come out of the water to eat because of the location of their mouth in respect to their head. The best analogy I ever heard from someone on my boat was that the redfish look like “free Willy” breaking the surface and landing on top of the bait.

Coming in at a close second on the excitement scale has to be the rattling cork. I don’t care who you are or what level your skill might be, we all smile when we see a cork go under. Over the past year I have become a solid convert to the 4 Horsemen rattling corks, they have proven to me on many occasions that there is something about their particular sound that really attracts fish and entices them to bite. I caught more redfish longer than forty inches in 2022 while using these corks than I had in the prior five combined…so please forgive me if I’m a little biased. Using a rattling cork over shell or near depth changes along the marsh drains is another fantastic way to take advantage of wintertime redfish.

No mention of redfish at this time of the year would be complete for me without mentioning crankbaits. As stated earlier I am a big fan of the Bill Lewis Rat-L-Trap, that goes without saying because they just flat out catch fish. Other lures in this category would include blade-type baits like the Hoginar or the various shallow running square-billed plugs such as Mann’s 1-Minus or Heddon Swimming Image. I’ll also throw in the shallow diving stickbaits like the Yo-Zuri 3D Fingerling. The aggressive strikes these baits provide when a redfish decides to eat one are enough to keep you coming back for more regardless of the weather.

For most Texas anglers the redfish will always take a backseat to the speckled trout, but it doesn’t have to be a distant second, maybe more like a 1A and 1B classification, if just given the chance. For those of us on Sabine we will gladly keep catching these second class citizens and be happy to have a target until things clean up in the spring and more options become available. Until that time, enjoy the pull from your next redfish and don’t wait so long until you decide to find them again.