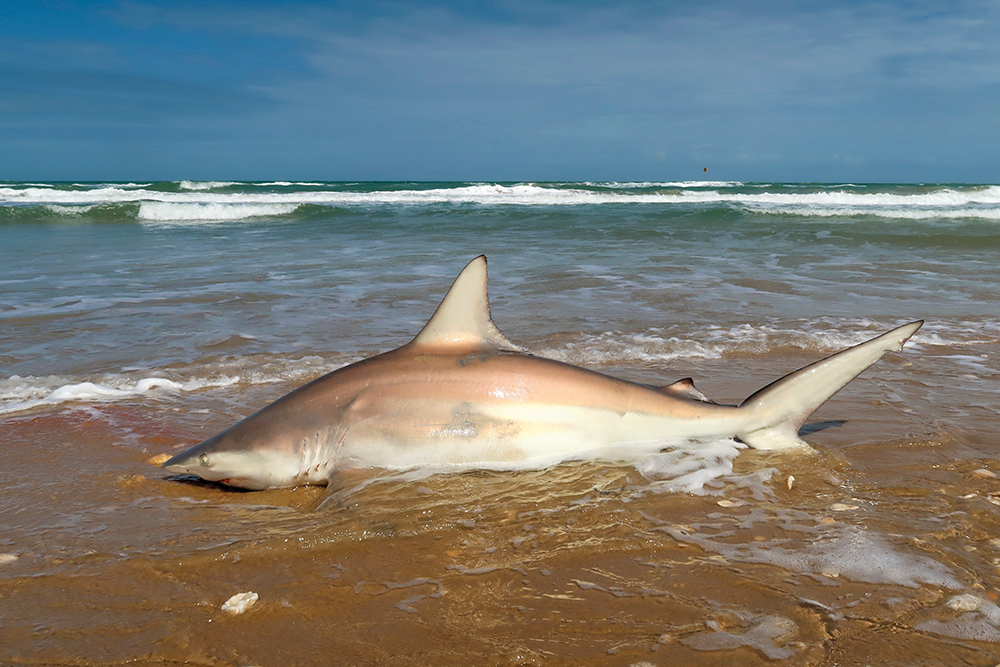 Imagine a spiritual surf fishing journey made during a calm, pristine day on Padre Island. As the seasons progressed into early summer, hopes have risen for a chance to catch some South Texas surf trout. During a slow drive down the beach looking for the proper location to walk in, hopes evolve into expectations.

The moment becomes feverish when predators blast bait fish right up onto the beach. Destiny appears to be calling, in a surreal atmosphere created by clear waters, gentle whispers of wind and puffy white clouds passing slowly overhead. Suddenly, a He Dog topwater feels like the perfect tool with which to earn a massive blowup from a solid surf speck.

As the wheels on the truck stop rolling, an impressive piece of structure along the beach reveals itself. The bars pinch and converge, creating a deep hole in the wading gut, one known as a “suck out.” As the He Dog waddles back and forth through the hole, confidence rises. On the first cast, a trout smashes into its side.

When the big trout rises and thrashes its head, all seems right in the world. But, the feeling is short lived. Suddenly, chaos ensues, and line begins to smoke off the reel. When the reel falls quiet again, the lure comes back in holding only the head of the prized trout. It's impossible not to admire the stark beauty of nature's handiwork; a curving bite mark reveals the moment's assassin as a blacktip shark.

Found in all tropical and subtropical waters around the globe, the blacktip is one of the most common shark species frequenting inshore waters. In Texas, most encounters with sharks in the surf involve this species. While not as large as tigers or as ferocious as bulls, these are supremely adapted predators, evolved perfectly for the waters they inhabit. Sleek and fast, blacktips can catch most any prey they chase.

Whether targeted specifically or hooked by mistake, these toothy critters inhabit our beachfront waters for the majority of the year, serving up entry level experiences from which most Texas shark fishermen gain their initial obsession. Visually, blacktips exhibit a truly iconic shark-like appearance. At first glance, their superbly hydrodynamic dorsal fins send shivers through the average beachgoer's body. This alone makes them an exceptional thrill to battle on rod and reel.

Because they occur in large numbers and feed on various types of prey, these are perhaps the easiest sharks to target. Maxing out at around six and a half feet in length, a one-hundred-pound blacktip can put up a memorable fight against medium-weight tackle. During March and April, blacktips move into the surf zone, with many large females carrying offspring, ready to drop their pups at any moment.

As the calendar creeps toward summer, the blacktips school up and begin chasing bait balls just offshore. When shrimp season starts during the second half of July, they venture farther offshore in great numbers to follow the shrimpers in search of easy meals. In September, when the anchovies begin to run the beach, they move back to the beaches and start a feeding frenzy. During this time, blacktips can be seen cruising in less than knee-deep water, devouring copious amount of small fish. The presence of many blacktips typically indicates a healthy state for the fishery.

Fishing for blacktips is perhaps easier than many think, as long as the angler possesses adequate gear. Offshore tackle suitable for marlin is not required, but landing a mature blacktip on a trout rod is almost impossible. Tackle of medium weight is best utilized.

Unlike many shark species, blacktips are not picky about what they're willing to eat. I've caught these sporty sharks on just about every bait imaginable, from cut mullet to 20 lb. jackfish. My favorite baits for blacktips are either whiting or skipjack; when fresh, both rarely last long when placed in front of these sharks. If neither fish is available, hardhead catfish often suffice. Blacktips sometimes seem to crave the slimy cats, passing up chances at other baits to swallow a slob hardhead pitched into their midst.

When hooked, blacktips are one of the few species of sharks that take to the air during the fight. Most times, they immediately jump, spin or flip in the air as soon as they taste the hook. Many anglers believe a hooked shark jumping and spinning must be a spinner shark, but this is a misconception. The vast majority of the time, the shark providing the aerial displays turns out to be a blacktip.

Here in Texas, we have blacktips of all sizes. While we do have a fair number of three and four footers, it's important to recognize other species which novice anglers often confuse with blacktips. Fine-tooth, sandbar, blacknose, and sharpnose sharks have all been falsely labeled as blacktips over time. In the past, it seems like blacktip was the common term used to refer to any and all mid-sized sharks. Thanks to the effects of education associated with conservation, average anglers today know more about the sharks they catch.

Smaller versions of the classic cult monsters made famous by the movie JAWS; blacktips are indeed a wonderful species. On my charters, we target them frequently, since they're plenty big to provide memorable thrills for kids and other anglers who've never caught a shark. Though they're certainly edible, I typically tag and release all blacktips fit for survival. These are the most common sharks tagged by recreational anglers, providing researchers a metaphorical mountain of useful data.

I once captured and released a previously tagged blacktip, noting the number on the tag. Almost a year to the day later, I recaptured the same shark. The moment gave me great pleasure. Though I do dream more often of tigers and hammers, it's important to acknowledge the fun factor blacktips provide when battled on tackle which provides a fair fight.