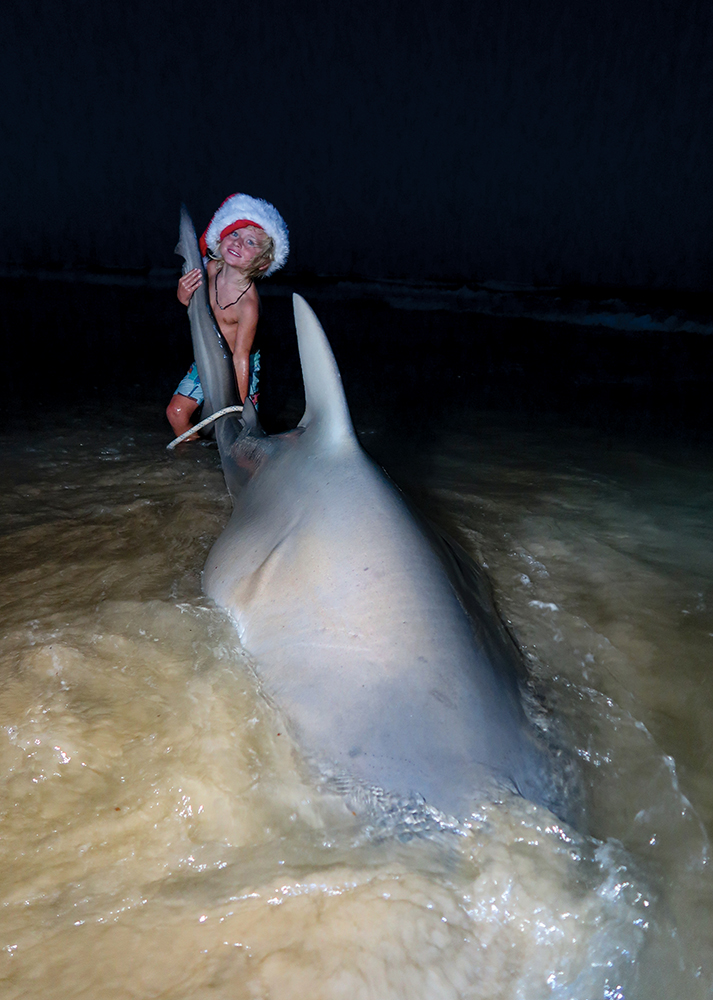 Finn salutes his conquered foe just before we dragged her out to deeper water for a successful release.

Once in a great while, a story emerges into the world triumphantly, to become part of a culture's collective memory.  I've been fortunate to experience many magical encounters with illustrious monsters, and would like to believe some of my own stories will carve out a niche in the annals of history.  But the following adventure is not about me.

The tale to follow is about overcoming seemingly insurmountable odds.  In this narrative, no experienced, battle proven warrior achieves glory.  Sometimes, the exploits of an extraordinary child spawn a legend.  Such is the case in this heartwarming account a modern day showdown between David and Goliath.

Conditions on the Texas coast proved delightful this fall, with an Indian summer lasting into November.  Warm water temperatures exerted a predictable effect on the fishery, as we never had a push of truly cold air.  When water temperatures remain warm, the pending migrations don't materialize.

In a normal year, the end of our dusky anchovy run happens early in October.  But this year, in November, massive anchovy bait-balls lingered just offshore.  Additionally, we saw no run of mid-size mullet down the beach, so we didn't see jack crevalle crashing into the shallows, like we normally would.  The mullet also normally attract hordes of hungry bull reds into the shallows this time of the year, but not in 2021.

Despite all these lagging phenomena, the warm weather did have one positive effect on the aquatic situation.  Due to the Caribbean-like clarity of our tepid water, we still had decent numbers of sharks around.  Some of them can claim the right to be called monsters!

I've been exceptionally busy on charters the past couple of months, experiencing many highs and lows, due to the delayed seasonal migrations.  One particular charter stirred great anticipation, the second annual trip with the Fratilas, for their son Finn's 5th birthday.  A sharking adventure would highlight the birthday bash for our large group.  My daughter Aurora joined us, adding to the family feel, and we all set out with high hopes.  I wondered if I could deliver the goods.

Aurora and I met up with the crew mid-morning on the southern end of Padre Island National Seashore, where I had run several charters—the area was the only place for many miles with extensive bird and bait activity.  The epicenter of all this action became our temporary home.  With calm conditions in play, I immediately deployed an array of shark baits.

Several rods were sent out with stingray, specifically cownose stingray.  Cownose is traditionally an excellent bait during summer, due to its bloody interior and high oil content.  These fish taste like candy to most sharks.  Soon after arrival, I had three large shark rods set out and ready for the call of duty.

Roughly 30 minutes after the baits began to soak, one of the lines got tight.  Line began to escape the reel, when the shark swam deliberately and slowly offshore.  We set Finn up on the top of the truck to start the battle.  I knew right away this creature was nothing small.  We were just about to jump on the train to ride a high when the hook pulled and brought the fun crashing to a stop.

Hoping the shark would come back, I left the bait out for another half hour, to no avail.  The mystery monster did not return for its lost meal, so we ended up bringing the line in to see what remained of the bait.  Large teeth marks provided the evidence I expected.

Once again, I deployed the cownose about 400 yards offshore.  This is a typical minimum distance for me in warm, clear water.  In summer,  most big sharks typically stay this far off the beach, especially during the day.  By mid-afternoon, we were ready for action again, this time knowing at least one monster lurked in our midst.  When the baits had been sitting for about another hour, drama began to unfold again.

We rushed to get Finn back up on the platform.  Since he's just five, he's much shorter than the average fisherman, so we had him stand on a five-gallon Yeti bucket.  This would be the Finn's helm for the duration of the fight, just as it was when he defeated his first monster shark the previous year.  This fish made a run similar to the previous one, showing raw, untamed power, sourced from great size.  Finn relentlessly cranked the 80W reel, sometimes gaining line, sometimes losing.

When gaining line became tough, I would engage the low gear to help Finn.  A reduced gear ratio makes turning the crank easier, but each revolution retrieves less line.  If the fish is pulling steadily away, using the low gear provides a huge advantage, but if it begins to swim toward the reel with speed, kicking in the high hear is often required to allow one to keep the line tight.

About an hour into the battle, we could see young Finn's energy starting to fade.  Dripping sweat, fatigue began to get the better of him.  But he refused to quit, so we kept encouraging him.  Over the course of the fight, I stepped aside several times to allow his mom and dad to take turns assisting and coaching the kid.

As the marathon battle neared the home stretch, he would need to duke it out a little longer.  The beach crowd cheered him on.  About the time Finn's eyes began to close, and his hopes were fading, we did our best to snap him back to the task at hand.  “Don't give up, buddy!” we screamed.

When the shark crossed over the second sandbar into the clear, shallow water, everyone could see it, including Finn.   The tall dorsal and tail fins slicing through the breakers into the first gut gave Finn a last burst of adrenaline which fueled him to finish the job.  After 90 minutes, I jumped off the truck to grab the leader and beach the loser of the epic tug-of-war.

Five year old Finn had conquered his opponent in remarkable fashion, and the assembled crowd rightly cheered him.  Lying before us on the beach was a massive 8'7” long female bull shark with more massive girth than I've ever seen on a member of the species of such length.  No doubt, the Goliath in our epic duel weighed somewhere close to 400 pounds.

Working quickly, we captured images of Finn and the crew with the subdued bull.  After just a few minutes,  we released the exhausted giant in water deep enough to allow her to regain composure and casually swim over the outer sandbar and back into the depths, where she disappeared.   Trembling and spent, Finn was also indescribably excited, at least for a few moments.  Within ten minutes, the remarkable kid passed out in the back of his mom's SUV.   The rest of us continued to celebrate how our tale's David overcame the odds and defeated a profoundly powerful foe.

Of the many sharks I've helped people catch, this one certainly ranks high in the echelon of greatest feats.  After doing my job to put young Finn on a monster shark and coaching him to the best of my ability, I have to say this is one of the brightest highlights of my guiding career.  All who saw this battle will forever remember it as a Padre Island version of the tale of David and Goliath.  Congrats to Finn Fratila, for playing the starring role.