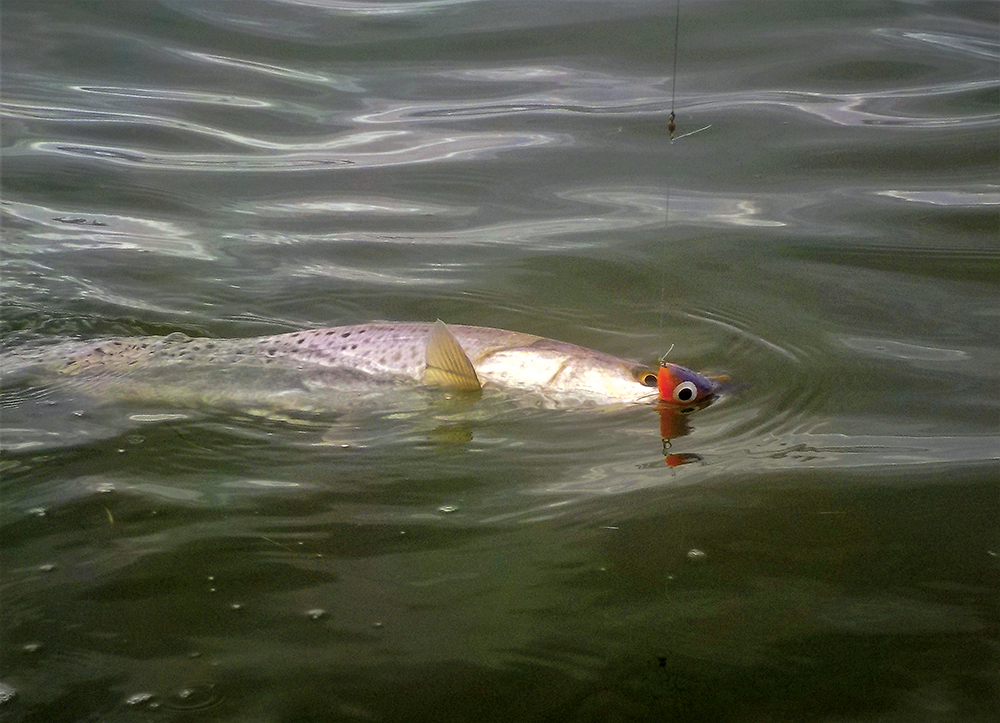 February is a prime month for catching big trout on slow-sinking twitch baits.

As the last full month of winter, February metaphorically displays two faces—one stern, colored frosty blue, the other more amiable, radiating a rosy hue. In the Lone Star State, temperatures in the Valentine's Day month can vary from brittle to balmy. The general weather pattern from the two prior months plays a role in which countenance a given February will most likely display.

If December and January temperatures run below average, and strong cold fronts pass over the Texas coast on a regular basis, the frigid face of February stands a higher chance of staring anglers down. This scenario certainly played out in 2014. In the years since, temperatures in the last and first months of the years have run at or above average, painting a tepid face on February.

Complicating the seemingly schizophrenic nature of the weather this month, both aspects of February can certainly express themselves in the same year. Temperatures might run quite cold part of the time, but warming trends might cause them to rise quickly to above average levels, sometimes within a span of a few days. For purposes of this analysis of how February weather affects fishing for jumbo trout with artificial lures, water temperatures matter more than air temperatures.

The cold face of February blowing over the bays will send water temperatures plummeting below the 60° mark, sometimes below 50.  In contrast, mild weather this month can prohibit water temperatures from dropping below 60°, holding them in the upper 60s and low 70s most of the time. These differences create disparate realities for anglers attempting to urge large trout to strike at plastic plugs fashioned entirely by the hands of man.

When water temperatures drop below 60° and stay at those levels for extended periods of time, particularly when they become stuck in the low 50s, a typical cold weather pattern evolves, with regard to lure choices. In weather like this, anglers benefit from deploying a daily lure-choice plan which starts at the bottom and works its way slowly up. This means beginning each day throwing a soft plastic rigged on a light (either sixteenth or eighth-ounce) jighead and working it slowly enough to maintain some contact with the bottom, then speeding up slightly if and when bites start to come easily.

If strikes occur frequently enough, say every second or third cast or so, and/or if those bites signal a vigorous feeding attitude among the fish, meaning they occur as resonate taps which cause the rod to vibrate upon impact, astute anglers often switch “up” to slow-sinking twitchbaits. This choice results from the assumption that a large trout prefers eating a finfish at least as large as a piggy perch instead of something smaller; twitchbaits like Fat Boys and Catch 5s effectively mimic perch and shad.

The lure-choice upward mobility on a typical cold February day stops there, though the arrival of a front or the setting or rising of a strong moon can certainly stir up an active topwater bite for a while, especially if water temperatures rise into the upper 50s. Generally, floating plugs work best in water temperatures over 60°, but 57° water which has recently warmed up from colder values certainly provides potential for catching big trout on top while they feed actively.

Topwaters work better, of course, while the warm face of February casts its glance on the coastal waterways. Anglers dealing with humid, sticky weather this month benefit from a completely different plan than the one used in brisk, nippy weather. This plan involves starting in the middle and adjusting either up or down depending on the outcome of the original choice. Specifically, most experienced trophy trout hunters fishing warm February weather start off throwing a slow-sinking twitch bait, then switch up to a topwater if and when bites come easily and provide evidence of active fish, or switch down to a soft plastic when urging bites becomes tough or impossible with the twitchbaits.

The uncertainty inherent to this pattern causes anglers to make bad choices some of the time.  A situation in which numerous lures worked various ways might work to earn strikes from the targeted fish makes it harder for people to commit to one thing long enough to test it adequately. Water temperatures in the moderate range create just such a quandary. Cold water temperatures simplify lure choice significantly, making it easier for most folks to commit and grind for bites.

Similarly, the cold face of February simplifies the puzzle related to locating fish. Especially when a chilly February occurs toward the end of a winter with below average temperatures, locating numbers of mature trout becomes easier, for people who recognize how low water temperatures affect the fish. Generally, when water temperatures fall to below average levels in December and January, adult trout move to deeper water, often congregating in basins, holes and channels near shorelines which offer protection from strong north and northwest winds. This truth relates to the way wave action affects water temperatures over time.

Along a leeward shoreline, where wave action runs low, water temperatures often remain higher after a strong front passes than on windward shorelines, where tall waves turn the water over repeatedly, driving temperatures significantly lower. If a pocket of relatively deep water lying along a protected shoreline drops down to 54°, while the water on the other side of the bay, or around an adjacent point of land drops down to 50°, fish will find their way to the warmer water.

Over time, cold weather thus concentrates schools of mature trout in places where water best retains its warmth. By the end of a cold winter, this means lots of big trout gather in relatively small areas, hugging the bottom in the basin while temperatures decline, moving into nearby shallows to feed when they rise. Extremely low temperatures accentuate all aspects of these truths, extending the duration of the shut downs, limiting the distances the fish will travel to search for food, and elevating their hunger when they feed actively. This simplifies the search for experienced anglers, while warm weather complicates the hunt.

Locating big trout in warm weather this month means looking for them in relatively shallow areas spread out all around the bays. When a warm February occurs at the end of a winter with above average temperatures, large trout usually move into the shallows and stay there. The problem for anglers then relates to pinpointing their exact locations. The abilities to make sound lure choices and execute effective presentations become intimately connected with the ability to locate them in such a scenario. Earning strikes and catching fish become the best ways to prove some big trout lurk in a particular place. Certainly, properly assessing all the other signs, like the presence of bait, mud stirs, wakes, slicks, etc. plays a key role in the process.

To represent some of these concepts, two graphics appear with this piece. The one titled “Cold Weather Cycle” attempts to show how the bite cycle plays out when fronts pass frequently and temperatures run below normal. The circumference of the circle represents one week of time. Typically, the fish bite vigorously just before and immediately after north winds whistle to announce the arrival of a cold front. The green line spanning the time before and just after the black line graphically representing the wind shift indicates this short-lived frenzy. Such frenzies sometimes allow anglers to catch a few giant trout on topwaters in the hour or so associated with a frontal passage; more often, in cold water, slow-sinking twitch baits work best, even during the frenzy.

Abruptly, the frenzy ends, as flags snap under the influence of stiff post-front winds. The red line inside the edge of the circle in the graphic represents this shut-down, which can last for more than a day, depending on the severity of the front. Once weather conditions moderate slightly and/or enough time passes for the fish to need food again, the opportunity for catching returns. The yellow line represents this part of the cycle. Sometimes, if the moderation in the weather occurs simultaneously with a stimulator like a rising or setting moon, or the start of a strong tidal movement, a green line would better represent what happens at the end of the shutdown.

On the other graphic, titled “Warm Weather Cycle,” just one front passes during the seven days depicted by the circle. In such a case, when mild fronts pass less frequently across Texas coastal waters this month, the frenzies and shut-downs become less frequent, and a generally mediocre bite attitude prevails. The yellow line represents this mediocre potential, but the bite attitude of the fish varies within its span. Stimulators cause the bite attitude to improve for a while, then decline, sometimes back into a negative range better represented by red.

Ironically, during a cold February, when temperatures rise and fall across a wider range, lure choice, fish location and the timing of the bite become more predictable, while in a warm February, water temperatures remain stuck in the relatively high range, and all those aspects of the catching puzzle become less predictable. By adapting to the truths inherent to the metaphorically bipolar weather this month, anglers elevate their chances of landing the trout of a lifetime, or at least some of the biggest of the year.