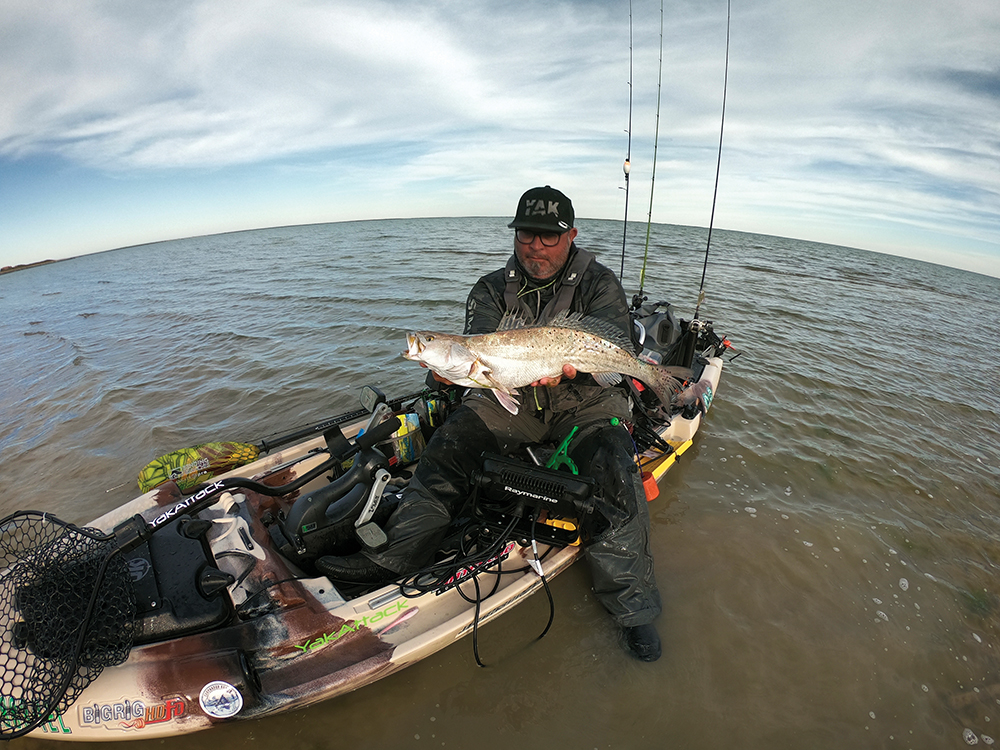 For some reason, that quote has stuck with me since the very first time I heard it. Often times when a mistake occurs, we take it personally and view it as a missed opportunity. Instead of having this negative thought, we should start looking at these situations as a learning experience. Although Mr. Ross said that with regards to one of his paintings, I believe that quote could be equally applied to most things in life – especially fishing.

I have spent countless days on the water and some of those I have had great success. Of course, despite having enjoyed many successful days fishing, there have been even more days that I failed. After having trips that did not go as planned, I would head back home, stare at google maps and try to figure out where I went wrong. Once you take a look back and study your mistakes, you can put together a game plan for the next outing. Eventually, all the pieces of the puzzle will come together and you will accidentally stumble onto what you have been looking for.

Here recently I decided to check out an area that I fished several years back. I haven’t fished for trout in the area since the hurricanes caused so much damage. Now that the Sabine trout fishery is again on the rise, I decided to pick up the waders and see if I could find a few better fish on my old flats. I paddled and staked out just far enough away from where I was planning to fish. Instead of fishing out of my kayak this time, I figured it would be best for me to jump out and re-learn the bottom structure with my feet. It has been three years, and between floods and hurricanes, I expected the bottom would be quite different.

I headed in the same direction as I always did and before I even launched my first cast I stumbled onto a big clump of oyster. I stopped immediately, began casting and moving laterally to the newly discovered bottom structure. A short distance from the first clump, I found a second. After realizing where I was standing, I knew that it was too late. I was right on top of where I should have been placing my lure. Needless to say, my trip was over before it started. No worries, I made a mistake, but had learned exactly how to approach the spot on my next visit.

A few days later I made my way back out and remembered my mental note of the location of both patches of reef. I positioned myself a full cast length away and right between the two patches. I had a Bone Super Spook tied on and the current was moving in the perfect direction to drag my topwater over the reefs. Like clockwork, I began to catch trout, on about every second cast. Although I didn’t catch any trophy-size fish, I had enough action to remain there until the bite stopped. Even small ones slamming a topwater is exciting!

If it wouldn’t have been for me getting out to wade, I likely may have never found those new reefs. Odds are I would have just paddled over it, continued fishing, and ultimately writing that spot off thinking that the fish never returned. I may have ruined one opportunity but my happy little accident is sure to provide success in the future.

I have been kayaking for years now and when I look back at when I started, there were several aspects of kayak fishing that I had to learn the hard way. One of my favorite spots, one that I still fish to this day, I found by losing dozens of jigheads. At the time, I was fishing 3/8-ounce jigheads as I was working a deeper channel and wanted to get to the bottom. Well, it never failed, I would reach this bend in the channel and start hanging up and losing lures.

Frustrated and not knowing what I was missing, I would just pass over that spot and continue on down the channel. After a few trips, I had mostly forgotten the location of each shell clump. One trip after, I talked myself into trying that spot again, and just like that, I got hung up. Instead of simply breaking off and moving forward, I decided to try working my lure loose. I positioned directly atop it and bounced my rod tip hoping to get it free. It worked. But no sooner was my lure free when I felt a healthy thump that nearly ripped the rod out of my hands. I landed a nice upper-slot red and that was the “Ah Ha!” moment. I quickly realized there were fish staging just above the shell patches. On my next visit I tied on a 1/4-ounce jighead instead and was able to avoid hanging up in the shell below. I then proceeded to have a fantastic trip and caught plenty of trout and redfish. That same little hole may not hold the numbers like it used to but it’s still good for one or two!

I guess instances like these are what keeps fishing entertaining and challenging to me. You can be doing everything correctly, except you are twenty yards off the sweet spot. And then there are those lucky encounters when you just happen to be paddling over places where the fish are staging. Putting the pieces of all these puzzles together is a learning curve that enables you to repeat your successes and become a better angler. Never allow your mistakes to deter you. Take them back to the drawing board and devise another plan. Mistakes and lucky accidents are yours for earning future angling rewards.