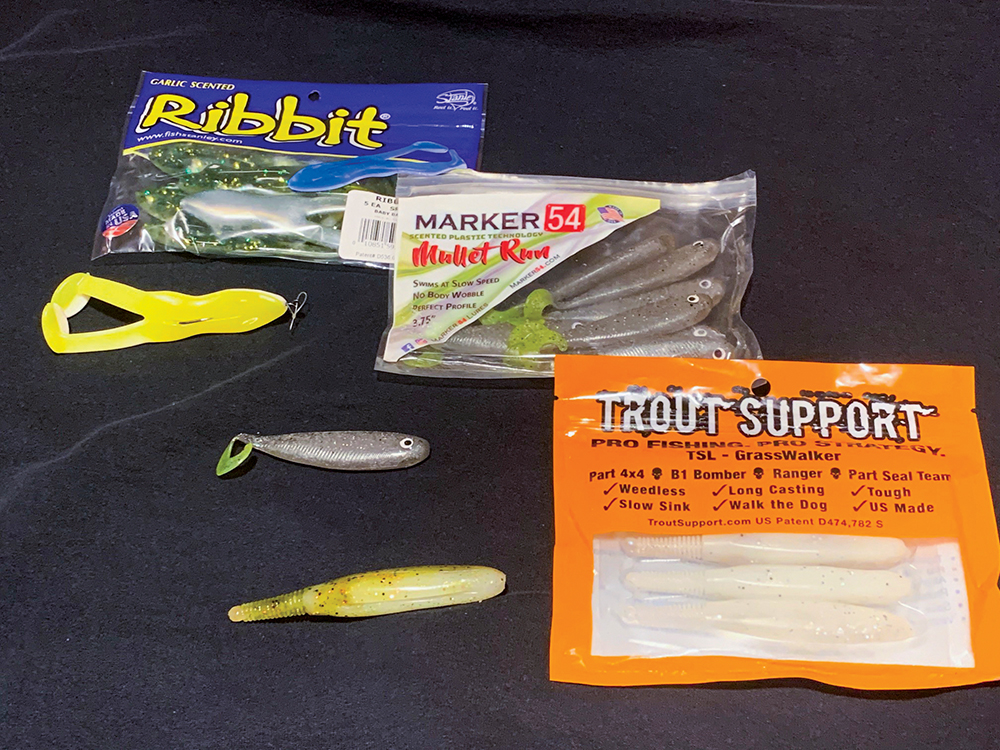 My favorite weightless soft plastics that demand a subtle presentation are much easier to throw on spinning gear.

I once heard a comedian say, “there is no cool way to ride in the back of a truck,” and when you think about it the guy has a point. I have said for many years, “there is no cool way to cast a popping cork or live bait on a baitcast outfit, especially when a spinning outfit is so much more efficient.” Right about now many of you reading this will immediately turn up your nose or quit reading altogether, and that’s exactly what you SHOULD NOT DO! Bear with me a few moments and be openminded. I promise what I have to say here will enable you to catch more fish and be more way more efficient in your casting and catching.

Several years ago while on a fishing vacation, “Howdy Tex” was a common greeting from other anglers as Bink Grimes and I strode down the dock toward our waiting boat. “I wonder how they know we’re from Texas,” I thought to myself, then I looked down at my rods and it hit me as I gazed at the fist full of bait casters. We were in Florida and baitcasters are a dead giveaway that you are from the Lone Star State. Over in the Sunshine State spinning tackle rules the angling world. Now before you go get in a fired up huff because you think it’s another one of those “Florida is superior to Texas” propaganda speeches, take a minute to realize what the real story is about.

For whatever reason most diehard Texas trout anglers and fishermen in general, refuse to throw a spinning rod for any one of a myriad of reasons. Most testosterone junkies discount the gear as being for novices or beginners but nothing could be farther from the truth. Now I am not saying that the spinning rig  is better than a baitcaster, let’s get that straight right now. I am saying, however, that spinning gear is generally overlooked and under-utilized in Texas saltwater. By adding a spinning rod to your arsenal of baitcasters you can cover just about any type of fishing situation that comes up along the gulf coast.

When I first started guiding, one of the most valuable pieces of information I received came from my good friend and mentor, Capt. Dickie Colburn. Dickie said, “son, a man can make a good living with a quality spinning rod.” Dickie should know, he’s has been doing just that for many years on both freshwater lakes and coastal bays. By using a light line presentation on a 6-foot spinning rod, Dickie has caught more flounder than you could ever imagine. “The spinning rod is perfectly suited to throw the tiny Road Runner jigs and Gitzit lures that flounder just absolutely love,” said Colburn. “You just can’t fish those little baits on a regular baitcast rod and reel.”

Another area where the spinning rod shines is when the situation calls for delicate or subtle presentations, throwing weightless soft plastics over grass or when you are sight-fishing. The ease at which an angler can cast these offerings with pinpoint accuracy and minimal splashdown results in more fish caught and fewer fish spooked. I cannot tell you how many times during the summer I switch from a baitcaster to a spinning rod just for the ability to throw a subtle bait at a finicky redfish…it works like a charm.

Wade fishermen can also benefit from using a spinning outfit. I know several anglers who carry both baitcaster and spinning outfit while wading. The baitcaster is used for casting downwind and for throwing big topwaters, while the spinning rod is used for throwing into the wind and casting more subtle offerings. The spinning reels are excellent choices for throwing Corkys also. The slower gear ratios helps you slow down your presentation and that generally translates to the lure settling into the strike zone for longer periods and more bites.

For close to twenty years I have been using Okuma spinning tackle and I have nothing but good things to say about their products. I have a couple of reels, the Okuma Trios and Cedros, that have both landed everything from perch to permit and more oversized redfish than I could even begin to count. From the poling platform on my little boat, spinning tackle really shines as I can make casts with minimal body movement, which automatically helps prevent spooking the fish I am targeting. Braided lines with 8- to 10-pound mono equivalent diameter allows packing these reels with enough line to handle just about any run a gamefish could make, and then some. The lighter weight of this class of gear in general contributes to reduced angler fatigue, something we’re always thankful for at the end of a long fishing day.

Over the years spinning tackle manufacturers have really made great strides in all areas including drag, gear ratios, and overall weight compared to earlier models. There are some amazing spinning reels out there that will really open your eyes if you haven’t ever considered them or even looked that way at your local tackle dealer. I highly encourage parents to think about spinning gear for young anglers because it takes a lot of stress out of the equation due to the simplicity. The spinning reel also allows young fishermen a much better opportunity to land a good fish compared to a pushbutton spincast model so many parents put in young anglers hands.

The spinning rod and reel is without a doubt a fantastic tool that more fishermen should take advantage of. Once you give this technique an honest try I feel sure many of you will see that there are some distinct advantages that you have been missing out on for a long time. Be open to the idea and see just what this gear has to offer.