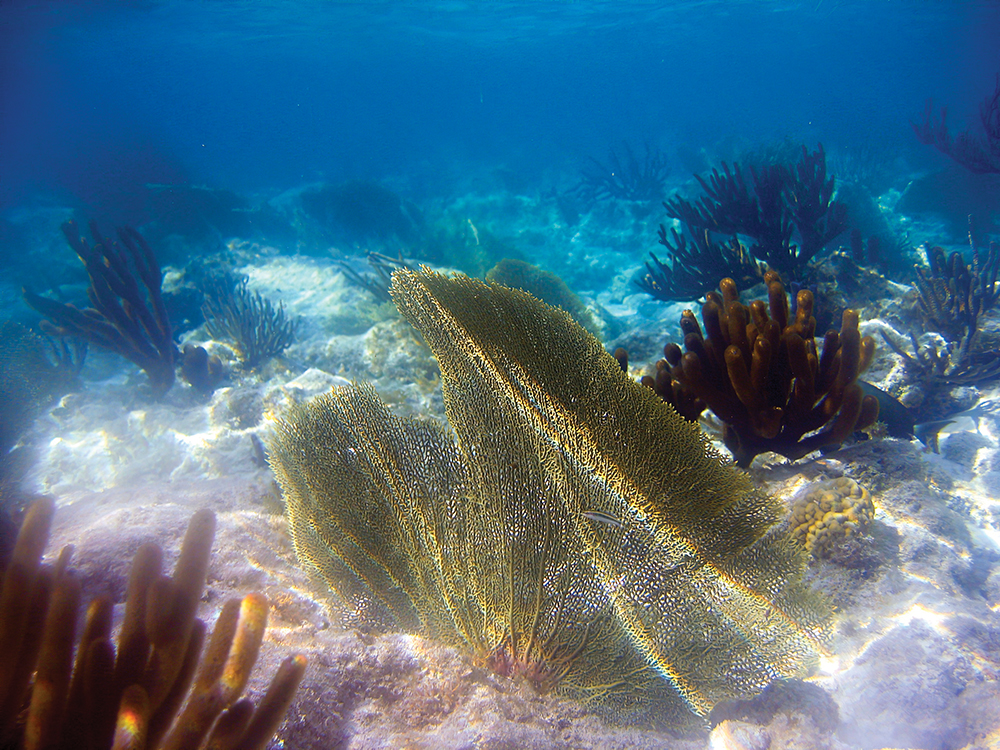 Many moons ago, on an island far, far away, a youthful, adventurous Oz explored a hidden tropical gem, a place with much mystique and pristine water. On this remote patch of sand in the Caribbean Sea,  a young man learned many new things about the marine world.  I spent many days solo, free-diving coral reefs in the company of creatures that could kill me at any moment.  The memory of my six month adventure in the Caymans, living as one with the reefs, the iron shores, and mangrove-laden shallows still holds a special place in my heart. While there, I learned techniques that helped me catch one of my rare, iconic sharks.

While attending Texas A&M Corpus Christi in 2002, I learned of a job opportunity in the Caymans, and couldn't resist, though doing so required putting my college education on hold. An adventurist already obsessed with the Texas coast, I yearned to see other famous beaches. I went to the islands to take part in a massive project, to build the Ritz Carlton Resort. We labored 10 hours a day, 5 to 6 days a week, but still found time to explore the beauty of the place. The good friend who provided this rare opportunity, Curtis Mai, would later become the founder of Sharkathon and Texas Shark Rodeo.

Curtis has played a role somewhere between father figure and big brother to me. He possesses a wealth of knowledge and lives an adventurous lifestyle, which earns my admiration. This also gave me greater confidence about the wisdom of making our expedition. Truth is, we embarked on the journey with almost no money in our pockets, and more fishing and snorkeling equipment than tools. I vividly recall my first glimpses out the window of the plane as we approached the islands. The offshore water was bluer than blue, turning distinctly turquoise over the reefs just off the beaches. I felt a palpable sense of adventure as soon as we landed.

The company we were working for gave us our own place to stay; though small, it stood just a short walk from a reef lying along the western shore of the island.  Our first afternoon, Curtis, our friend Mike Cunningham, and I walked straight to the reef and started snorkeling.  We found ourselves in water that seemed too clear to be real. A vibrant array of reef fish and exotic corals provided color and texture to the scene. Countless spiny lobsters took refuge under various coral formations. Amazed, we played in the water until dark.

That evening, we took a short walk up to the island's biggest town and capital, George Town. Grand Cayman’s primary industries are banking and tourism. The cruise ships pulling up to the docks often hold more people than the population of the town. Most importantly, Grand Cayman is one of the world's diving meccas; the quality of their water ranks second to none. In this remote village, we found seductive and beautiful Sirens—young female Canadian bartenders, and all three of us spent virtually every penny we had celebrating our triumphant arrival with tropical beverages. I knew the exotic nightlife would be a problem—a good problem.

The next morning we quickly brushed off a hangover, completed our safety orientation for the job, and were all set to work, our papers and visas filed. The following morning we would begin our first day of work, but before then, we had an afternoon to ourselves. With our business taken care of, we predictably decided to try some fishing. Using our normal mode of transportation during this adventure, we walked to our destination, the iron shore surrounding the reef, where we would cast our lines into the Caribbean Sea for the very first time. Before long, we found ourselves catching our first fish!

Turned out sundown is a great time to catch jacks, both horse-eye and bar. Both species work well as shark baits. We were told over and over by the locals, "Oh, no man, there are no sharks here in Caymans.”  We believed this until we had our first encounter a couple nights later, when we chose to fish AFTER the fall of night. We started catching jacks over the reef on topwaters, only to have them repeatedly mauled as we reeled them in. We knew we were tapping into unknown territory and wanted to find out what kind of sharks lurked among the shadows in the reefs.

Armed with a 12/0 Senator shark reel, I had a proper leader ready, but without kayaks, we had no idea how to deploy our baits safely. Initially, we tried launching live, plate-sized jacks under balloons, using the hammer-throw method. The baits never lasted long as they would get picked up and taken straight towards the depths lying beyond the offshore side of the reef. We hooked some hefty sharks but never managed to land one. Despite making some adjustments to our techniques, we found no success in the sharking department.

The routine became quite regular – work hard, fish hard, party hard. Falling quickly into this routine came naturally to all three of us.  For the first few weeks, we hit the same location every evening, catching a variety of fish, including jacks, tarpon, and barracuda.  Soon, I experienced one of my most bizarre and incredible fishing memories; it happened while I stood in darkness on the edge of the iron shore, elevated about a foot or two above a calm sea, looking at the ocean's bottom beside the virtual wall  created by the reef, through about 10 feet of air-clear water.

Sharks came cruising in with fierce intentions, swimming along the perimeter of the shore. In the glow of our headlamps, we could clearly see the shapes of many. I stood still and simply dangled a bait just out in front of my feet, watching in awe as a shark measuring at least 8-feet picked it up. Still holding the leader in my hand, I fed line out steadily. After sucking down the bait, the shark ran at least 300 yards to the drop-off outside of the reef.  Mike and Curtis held onto me so I would not get launched into the water. Needless to say, we did not land that shark either; it cut our line once again on the reef.

Hooking and losing that fish sent us on a quest to land our first Cayman shark. Soon, our mission became briefly interrupted, but also improved, as our housing was relocated to the northwest side of the island, placing us even closer to the water, less than 100 yards from a different Caribbean reef. The move revealed new waters to explore, and we proceeded to experiment with tactics at the  location.  This cove presented us with the same problem— hungry sharks came in at night, stole our baits and left us with tattered lines. We realized we needed to formulate new plans and think outside the box. Our techniques had to be redeveloped to accommodate the environment in which we were fishing.

Eventually, Curtis and I went to the hardware store in search of components to create the perfect sharking “bobber.”  We purchased a 5-gallon plastic gasoline can and glue to seal it air-tight. We then attached a custom, buoyant shark leader to its handle, using a looped section of heavy line.  That afternoon, just before sundown, we headed out to our new location, and I swam the bait out past the point where we could launch it from the beach, then created a system which kept the bait and float stationary until a shark broke them free.

On the very first attempt with the set-up, we succeeded in hooking a shark; the gas can did its job of preventing the beast from diving to the bottom and cutting our line on the reef.  After a short fight, our efforts had finally paid off, and we beached our first Cayman shark, a 6-foot Caribbean reef shark.  While our prize was not a monster like the several we had previously lost, the catch did prove our system would work.  After tagging and releasing our first foreign land-caught shark, we made the wise decision not to swim another bait out in the dark, and headed to town, lured again by the Sirens, intent on celebrating our newfound success with drinks.