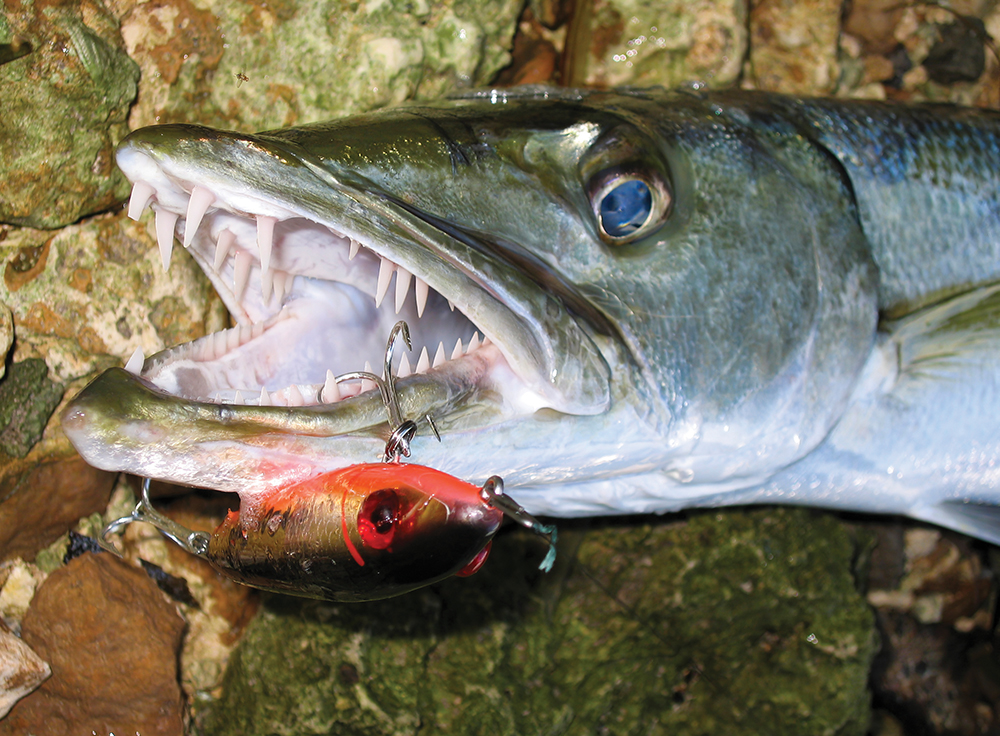 Another topwater “killed” by a Cayman barracuda.

Here we continue a two-part tale that recalls a grand adventure I experienced in my younger years. At the end of part one, Oz and his friends had just accomplished an elusive goal—to catch a land-based shark from the shore of the small Caribbean island of Grand Cayman. Ironically, our first shark was a Caribbean reef shark. For both me and my partner-in-crime Curtis, who granted me this incredible opportunity, sharks played the most important part in our angling lives. Our other friend Mike had great interest in fishing as well, but with less focus on sharking.

Following Mike's cue, we placed more emphasis on targeting other species after catching our first Cayman shark. We spent most of our time on the weekends chasing bonefish on the flats. We found we weren't much good at catching the speedy, silver ghosts, though it was quite amusing to see them swim up to us, look at our lures and swim away, sometimes passing between our legs, almost mocking us. We could've won an award for how NON-productive we were. Nonetheless, those bonefish hunts were amazing to experience.

The longer we stayed on the island, the more places we explored. Grand Cayman has a unique structure. Just a few miles long and wide, the western half of the island wraps around something like a horseshoe, with protected shallows on the insides of the curves. Here, mangroves grew rampant, providing copious amounts of structure for fish like small tarpon, bar jacks, and snapper. Camouflaged in the grass and stalking in the shadows, one more prime predator lurked—the barracuda.

The ‘cudas were more than abundant. Mostly, we saw them as by-catch; we were trying to catch tarpon. Most of the tackle we threw at these fish ran toward the lighter side. Our main lures were MirrOlure topwaters. We'd brought a handful from home, but they were not lasting long. The barracudas attacked them with great force, and their teeth punctured the lures, causing them to fill with water and become sinkers. For every two or three ‘cudas we landed, we sent another plug to our growing topwater cemetery. Barracuda behavior is interesting and eerily vicious at the same time.

One time, I landed a small ‘cuda in a shaded area running along a bank studded with mangrove trees, a great haunt for hunting predators. Seconds after I released the five-pound ‘cuda, a slightly larger one shot like a torpedo from the shadows and cut the one I had just released in half. Physically powerful, barracudas rate high on the list of fearless fish. They often followed me with great interest when I went diving on the reefs, forcing me to keep an eye on them. Observing these snaggle-toothed predators in their domain is both interesting and dangerous.

After half a year, turmoil interfered with the project, and we learned we would be released from our contracts, forced to head back to Texas. I had mixed feelings about the situation. Eager to get back home with a few bucks in my pocket and fish the beach hard, I also knew I'd miss my newfound friends and nightlife. With less than a week left before our departure, Curtis came up with a radical idea. He wanted to take a trip to a nearby island to fish and explore for a few days. Our options included Jamaica, Cuba, and the other two islands in the Caymans. After long thought and using logic, we decided on Little Cayman Island.

True to its name, Little Cayman is not as big as Grand Cayman. Those arriving by air do so in small prop planes, the only aircraft capable of landing on the short, grassy strip. I got some weird looks when I brought my gas can bobber aboard the plane like carry-on luggage. The remote island had few amenities, namely a lodge and a tiny convenience store, and its roads were rough and generic. At the time of our trip there were only a few dozen permanent residents on the tiny island paradise.

After arriving, we rented one of the two available cars and set up our camp on the beach. We made our home in a tent right on the sand next to a reef, in the midst of the fish, with no one else around. Mostly we shared the space with carnivorous land crabs and coconut palms, a surreal experience for me. For three days, we swam and fished the reef. At night, I put out shark baits via our new Cayman method, and the shark gods rewarded our efforts graciously.

Over the duration of the stay, I landed my first three lemon sharks, all at night. During the day, when the sharks weren't present, we chased tarpon and bonefish. We saved any jacks we caught for nighttime shark baits. While snorkeling, we observed and frolicked with nurse sharks on the reef. ‘Cudas stayed close by, acting as our escorts. We came to understand why the island ranked atop the list of best diving destinations in the world; the mind-boggling amount of pristine coral on the reef inspired awe in all of us. Countless stars lit the night skies, free from the intrusion of typical city lights. All these things made it hard to accept we had to leave, but after spending several days in a micro-paradise, living out a dream, it was time to get back to the main island, then fly home to the Lone Star State.

I'm grateful for the time I spent in the Caymans. While there, I had a job and earned a decent pile of money. The nightlife was fit for a rock star; I attended mass parties at vacant hospitals, had great relations with beautiful women in this tiny Utopia in the middle of a tropical sea. One evening, I sat down and had a beer with the late Bill Paxton, who was in the Caymans filming a movie. On another night, I hopped around from bar to bar with the Miami Dolphins cheerleaders.

For a 23-year-old kid, life was good to say the least. To top it off, the fishing experiences were second to none. I got to see my first bonefish and permit in the wild, caught new species of sharks, and targeted tarpon at will. I relied on the methods I learned while catching lemon sharks on Little Cayman to catch my first mako from land when I got back to Texas. From these experiences, I've come to a place where I can offer this advice to young people unencumbered with adult responsibilities—if you crave adventure, don't pass up an opportunity to explore somewhere exotic and different. I was quite hesitant, almost fearful when Curtis first propositioned me with the idea of moving to the Cayman Islands for work. In the end, it was an exhilarating experience, unrivaled by anything else in my life!