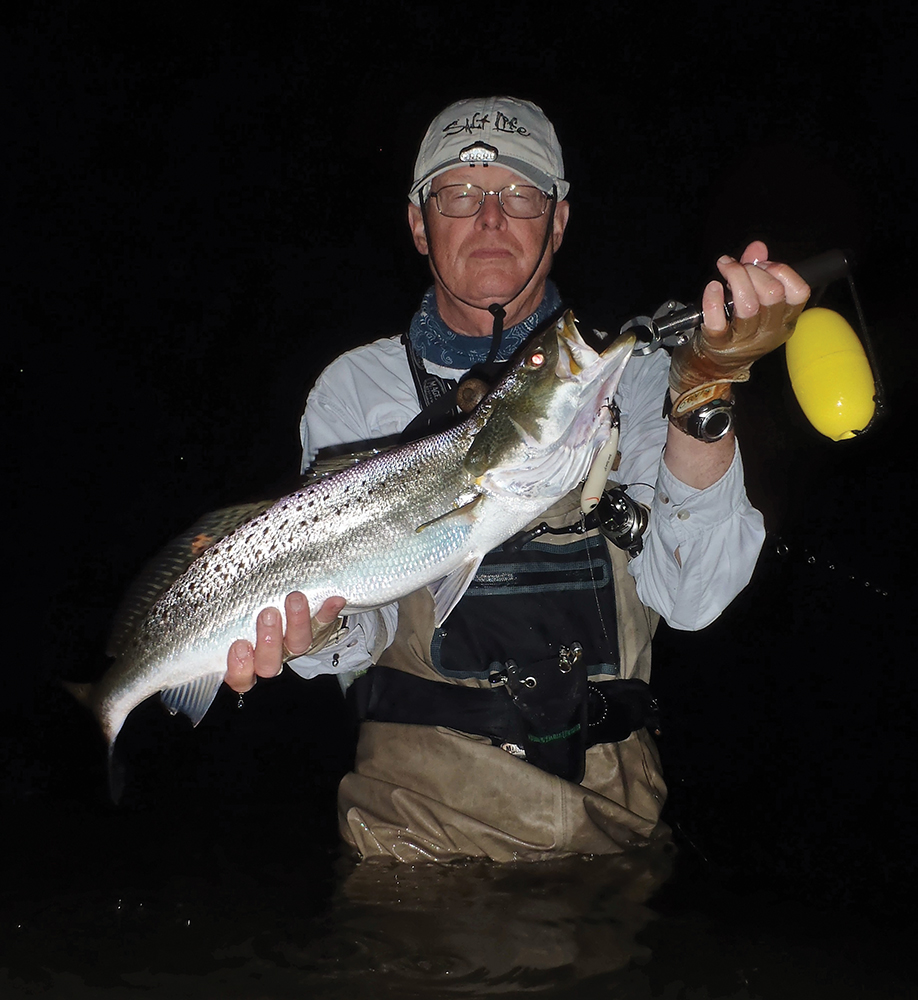 Sheldon Arey used a small light clipped onto the brim of his baseball cap to make fishing in the dark much easier.

When spring ends and summer begins, frenzied winds usually calm somewhat, water temperatures climb above 80° to stay for a good long while, and people seemingly come out of the woodwork, heading to the coast to fish. For many folks in the Lone Star State, June plays a role as the first full month in the saltwater fishing season.

For other people, who live close to the water, or who fish the salt all year long for other reasons, this month has both positive and negative attributes. Certainly, the generally benign weather conditions and warm water facilitate consistently productive fishing, and that's a good thing. Some would say people zig-zagging all over the water in their boats and lining up shoulder to shoulder on the shorelines, beaches and jetties is a bad thing, especially for individuals who seek solitude and an escape from the hustle and bustle of everyday life when they go fishing.

Additionally, high temperatures in June exceed 90° on a daily basis. The long days, short nights and soft breezes generate consistently sultry conditions. Many outdoor enthusiasts shun the mid-day and afternoon hours during this month when the summer furnace begins blasting in earnest. For all these reasons, some anglers like to beat the heat and the crowds by hiding under the cool cap of darkness and fishing at night.

Anyone heading out to fish during the dark hours should consider several things before embarking. The lack of light generates dangers of various kinds. A longer list of concerns develops when the plan requires the use of a boat. Extensive knowledge of places and practices makes fishing at night safer and more productive.

All navigating done under the cover of darkness should include the shining of a bright light forward of the craft, into the expected lane of travel. Ideally, such a light illuminates some kind of recognized signs, sticks or natural features, so the captain can visualize a mental map.  Before heading to a spot to fish at night, anyone should have a high level of familiarity with the most efficient, safest path to the place from the launching point, including all significant hazards to avoid along the way.

No one should run around on our bays and coastal waterways these days without the aid of a working GPS. Enhancing the unit with additional data, including track lines, anchor sites and sweet spots accomplishes two related goals, making the boating safer, the fishing more consistently productive. At no time do these truths ring more true than at night.

Safety concerns also dictate the need for a fairly high level of knowledge of the spot where the effort will take pace, including a familiarity with specific features which form the layout of the place, when wading is the desired method. Certainly, no one should attempt to wade somewhere at night unless they've fished there many times during daylight hours, and have a fairly intimate knowledge of the topography and consistency of its bottom features. Placing anchor icons on the GPS screen facilitates the ability of anglers to leave the boat with a precise idea how far and in which direction perceived sweet spots lie from the transom, making the trek both safer and more productive.

Of course, when wading, all anglers should use gear to protect their legs from the poisonous barbs of stingrays. This truth holds strong significance in a month like June, when warm water temperatures ensure the presence of plenty of rays. When a person chooses to walk around in the bay during dark hours, stingrays have reduced ability to perceive danger using their eyes, so they become less likely to swim away from approaching waders. All this dictates the use of protective equipment for nighttime waders.

In addition to Ray-Guards or some similar gear, anglers who choose to wade at night should carry lights with them, and use those lights when handling fish and changing lures. Wearing small lights on the bill of a baseball cap works fine; more elaborate lights come with adjustable, flexible bands which hold them in place on the forehead. These methods work better, in my experience, than trying to wear a light dangling from a cord around one's neck.

Leaving the light turned off while fishing lets the eyes adjust to the darkness. On clear nights, when moonlight casts a silver sheen on the water, eyes adjust and become capable of seeing fairly well without the aid of artificial light. On cloudy and/or moonless nights, seeing one's hands in front of one's face can prove impossible. Depending on the water clarity in the targeted area, a darker night might enhance productivity more than a lighter one. I've experienced my best fishing at night in profound darkness, perhaps because I've spent the majority of my career fishing in clear water, targeting large trout.

Deep darkness facilitates the efforts of a predator intent on killing and eating another fish in super clear water, making it easier for the predator to ambush its prey.  Slow-sinking twitch baits in colors like red and black work well in clear water under lightless skies. In places with murkier water, where predators can't see much at all, One Knockers and Super Spooks usually entice more attacks. As a bonus, clicking topwaters allow one to maintain contact with a lure and presentation and stay focused during each cast and retrieve, especially on calmer, quieter nights.

Certainly, many people think fishing under a bright, full moon makes more sense than fishing on nights when everything looks like India ink, and in places where turbidity reduces the ability of fish to see, such an opinion makes perfect sense. At the least, bright moonlight makes fishing at night easier for people, because they can better see what they're doing.  Picking backlashes in the dark, even with the use of a cap light, proves tedious at best.

Anglers with ample experience and relatively high levels of casting and other skills benefit most from wading at night, for all these reasons. Some will choose to wade familiar spots like reefs, sand bars, shorelines and coves in the bays; others can venture into the surf, when gentle winds render such an idea worthwhile. At the ocean's edge, prudent anglers wear flotation devices and stay in shallow water.

Folks who don't like to wade, or who have legitimate fears related to doing so in the dark can do other kinds of fishing at night, in attempt to beat the heat and the crowds. One of these ways involves boating to a jetty and deploying some type of light over the gunwale to attract fish. Before I became fanatically committed to fishing exclusively with lures, I enjoyed taking a boat to the jetties and using a light to attract bait, then netting the bait and using it to catch trout. At times, this method becomes richly productive, generally when soft winds and small waves sloshing around the granite boulders facilitate excellent water clarity. In such a situation, a light dangled over the gunwale penetrates deep into the brine, attracting glass minnows, ballyhoo and other creatures into the orb.

On some occasions, the entire ball of glowing green teems with a variety of creatures, most of which can be used to catch trout when dropped straight down under the light. On other nights, catching a minnow or ballyhoo can prove harder than catching a trout on it once the bait is caught. I remember having fun many times with buddies, as we posted up on the gunwale, nets in hand, trying to box the other guy out as a hapless minnow approached.

We impaled our live baits on light circle hooks tied to monofilament leaders about 20 inches long, attached to our main lines with swivels, above which we ran slip sinkers, varying the size of the weights to account for the amount of current swirling around the rocks.  More current dictates the use of heavier weights, but lighter sinkers allow the bait to move around a bit more in weaker currents. In most cases, the trout become easy to catch right under the boat not long after the ball of light fills up with species upon which they prey.

Anyone attempting to fish this way needs to remain cognizant of several dangers inherent to such a plan. Wise captains use special anchors to keep their boats in place adjacent to jetties. Those anchors have spikes which can bend enough to release their grip under pressure from a working motor. Deploying anchors meant to hold boats in place over a sandy bottom makes no sense at a jetty. Nor does deploying an anchor on the upwind side of the rocks, so the stern of the boat points at the unforgiving wall of granite.

Of course, anglers can walk the jetties and fish at night. On some occasions, trout and redfish blow up aggressively on floating plugs like She Dogs and Skitter Walks rattling close to the rocks under inky skies. Certainly, hopping over crevices between granite boulders in the dark creates significant risks. Folks without extensive experience fishing a jetty during daylight hours should not attempt to fish it at night.

This statement applies to all kinds of night fishing, in the end. People who hope to stay out of the crowds and avoid the searing heat of summer can put more fun in the fishing by heading out at dusk or later and fishing into the wee hours. Doing so on relatively calm nights with savvy partners and carefully considered plans can lead thoughtful anglers to the coolest kinds of outcomes.