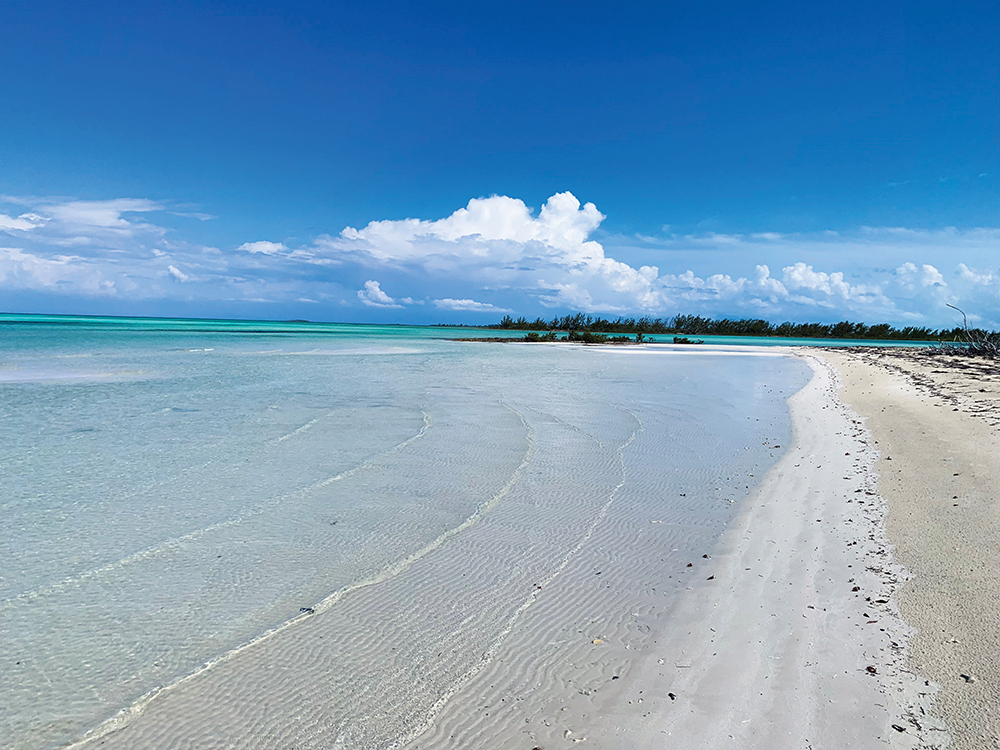 A few years ago I received a call from a friend asking if I might want to go on a fishing trip. He and a group of guys were headed back to Andros Island in the Bahamas to target bonefish. I agreed to join them without hesitation as bonefish has been on my species bucket list and I have been looking for the opportunity to check it off. Well we all know what happened two years ago (Covid) and our trip got pushed back until this year.

After meeting with the guys and discussing timing issues with the lodge, we finally pinned down our dates. We had decided to arrive to Andros on a Tuesday but that got me thinking. With my work schedule, I was already off from the Friday before, so I figured maybe I could spend a little extra time on Andros. This would give me an opportunity to visit some of the other parts of the island and maybe I could get a chance to do a little DIY fishing on my own.

With the days leading up to my trip, I studied maps, fly tying tutorials, and just about everything I could think of that was bonefish related. Between the white sand flats, the crystal clear water and the lore of these fish, I felt that I was out of my element. However, it is just a fish and they must certainly adhere to some sort of pattern; it was just going to be a matter of putting some time in to become familiar.

The time finally came and I was off to a remote island in the middle of the Bahamas. It was just me with a bag of clothes and two fly rods— let the adventure begin! I touched down on Andros on Friday afternoon, got my rental car and headed to unpack my things at the cabin I had rented. I was excited to explore the island and as I drove around, I pulled off the main road to find access to some of the beaches in hopes to find something that looked good enough to fish. After finding a few areas, I decided to head back and get my gear ready for the next day.

As the next morning came, I made a pot of coffee and lazily gathered my stuff, planning some further reconnaissance along a stretch of secluded beach I had found the day before. The walk was enjoyable with beautiful scenery, but all that I found were a few conchs. I then headed north on the island and came to an area that I thought looked a little more promising. A creek flowed to the beach and near the mouth of it was a bunch of broken sand flats covered with pods of mangroves. I just had to check it out.

As I walked the sand flat, I kept looking for signs of fish when I received some help from above. A seagull was hovering above the water just as they do in the Texas marshes with redfish, but as I continued watching I soon noticed a pair of tailing bonefish. No sooner than I spotted them though, they eased off the point and back into the depths of the channel. Looking back at it now, I believe both of those fish were well into the ten-pound-plus range. I continued exploring the rest of the day with little luck. I finally decided to call it quits and opted for some conch fritters and a cold Kalik.

The next morning I decided to go south and look at something new. I parked on the beach front and walked a few hundred yards down to a big pocket, or a bight as they call it. When I arrived, I noticed that there was a small channel that went all the way from the beach front to the very back of the bight. On the other side was a large white sand flat and in the back was mounds of mangroves. Judging by the size of it, I knew that I could spend all day in this area.

I took off and started making my way toward the back; the tide was coming in so I was hoping that it would push some fish in that direction. A few hundred yards into my walk I spotted my first bonefish. I laid out a cast and the fish paid no attention, continuing to swim unfazed. Continuing on toward a clump of mangroves, I spotted a pair of bones easing from behind them. I gingerly placed a cast of about twenty feet into what I hoped would intersect their path and waited as the pair approached. I made a long, slow strip and one of the fish turned and ate my offering. I was so excited that I over-reacted on the strip-set and broke my line. Failure on my part!

I quickly retied and, before I knew it, there was a group of 6-10 fish tailing behind me. I ease into position to cut them off and laid out another cast. The reaction was identical to the first and within seconds my line was shooting across the water! I heard the backing knot zipping through the guides; this fish meant business! By the time I gathered myself, I realized that upon her exit, she had centerpunched three separate mangrove clumps. I got untangled from the first clump when she headed straight for another. Thinking all was lost, I decided to abandon my rod and attempt a landing by hand-lining. Far from pretty, but it worked. I hurried snapped a few photos and released a perfect Bohemian Bonefish. Getting my tackle and line untangled from the mangroves was a whole other story.

Another afternoon thunderstorm was brewing and I didn’t relish the thought of being caught in it wading the flats. On my way back I got to cast at a handful of fish and only had one taker. Nonetheless, I had finally found some fish and I knew exactly where I was going to be the next morning.

Morning arrived and I was off to see if I could repeat my success of the previous day. What I soon discovered was a receding tide with the water level about a foot or so lower than the day before. Scanning the bight I noticed a portion of the sand flat exposed so I figured that would be a good place to start. Not long into it, I saw a pair of tails come up and they began heading my way. I made a cast and for some reason they both completely dodged it and never stopped. I continued on and eventually found a few cooperative fish on the white sand flats. Getting to watch multiple fish come across these flats and head your way is an awe-inspiring rush. Especially when you get to make a cast to them and one breaks away to follow your fly all the way to the tip of the rod! I landed four fish that day and decided that I had enough.

I ended the last solo day sitting in the shade and relaxing by the beach. I got to see a large portion of Andros and every aspect about it was just as unique as it was beautiful. The next morning I was going to meet the rest of my group at the airport and head to our lodge. We had six more days of fishing and our adventure was just beginning!