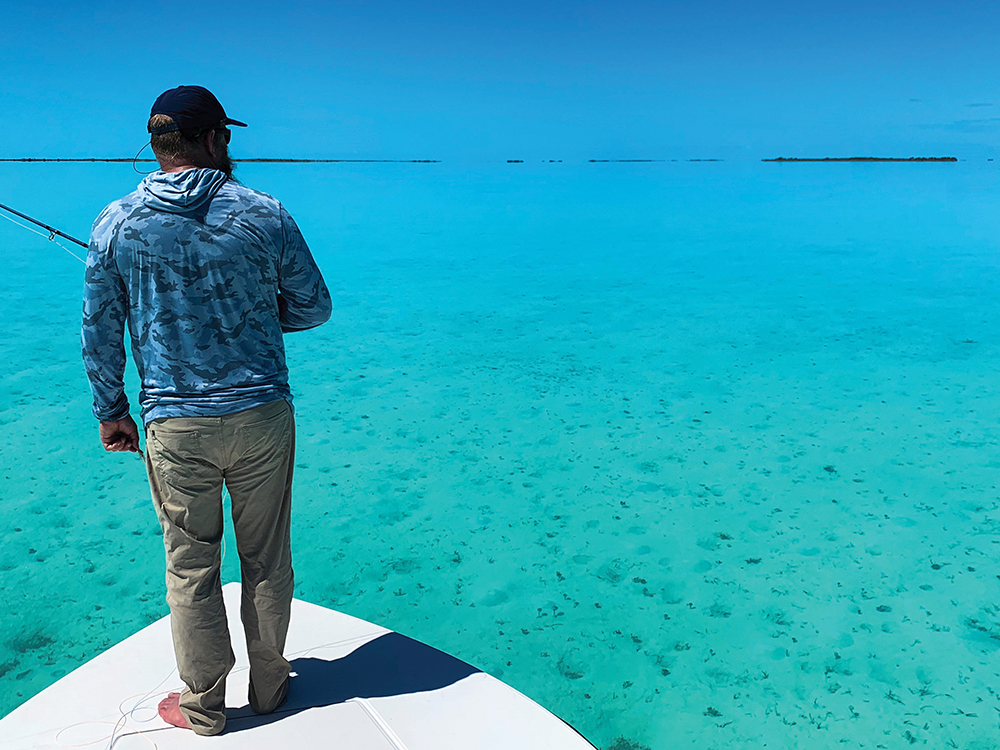 I stood on the edge of the tarmac watching as an old twin prop airplane came roaring in from the south. Judging from the look of it I would say it’s the same one from the 1980s. I wasn’t surprised. It touched down and made its way over to where I and a handful of taxi drivers were waiting. The side door popped open as soon as it came to a stop and my friends began making their exit. I had already been in Andros for several days exploring and fishing the island, seeing familiar faces gave me a good feeling. As they gathered their luggage, I welcomed everyone with high fives and hugs and was happy that everyone finally made it down. We gathered our gear, hopped in the nearest two taxis that could carry us, and headed down the road.

An hour later we arrived to Frankie’s Two Boys Inn and were greeted by his wife Melinda. Several of the guys have been there multiple times so they knew her and the family well. Exchanging hugs and introductions, we all grabbed a room, a cold Kalik, and began preparing fishing gear for the next morning. That evening, over a fresh-grilled lobster dinner, we decided on the pairings for the next morning.

Morning came and everyone was eagerly up, dressed and ready to go. After a quick breakfast we all headed down to the dock where our guides were waiting. Mellissa split us up accordingly and Jimmy and I got on the boat of Mr. Joe. He was an older gentleman, in his early 60s, was singing Willie Nelson in a Bohemian accent and cracking jokes before we even left the dock; I knew right then we were in for a fun day. As we came across the bight I was struck with pure awe. I didn’t know there were so many shades of blue and the sand flats lacked all of them. Our first stop was along an area he called Pine Cay and he began poling down the shoreline. After a short stretch he knew the fish hadn’t made it there yet with the tide so we picked up and moved on.

Clouds began to move in as we cut across the bight and Joe decided to put us out to wade a flat. Jimmy and Joe went right and I went left. It wasn’t long into my wade when I spotted three nice bonefish coming straight towards me. I landed a cast in front of one of them and waited for the right time to move my fly. It didn’t take much and he was on it quickly. I made a strip set and he took off, it was a picture perfect bonefish. We made it back to the boat and Jimmy and Joe reported having seen plenty but never connected – they had evidently become a little picky. Back in the boat, Jimmy gave me the front deck and Joe began poling us toward the back of a protected pocket.

Making our way to the back corner of the pocket I looked ahead and spotted a pair of bonefish cruising in our direction. Joe set me up for a perfect cast with instruction to make it a long one. I gave it my best effort and, as the fish approached, I began stripping. Neither fish showed interest. Joe told me to make another cast and as I began picking up my rod the darting of my fly drew attention of one of them, and she quickly started hunting for it. I dropped it, she turned and ate, and was into my backing before I even knew what was going on. At this point, Joe’s fun attitude quickly changed and it was straight business on the boat. He kept reiterating to keep my hand off the reel, keep pressure, and that it was a good fish. After nearly taking all my backing I got her to the boat and she promptly took off again, nearly spooling me a second time. Once she got close, I jumped out the boat and was able to get my hands on her. Jimmy snapped plenty of pictures and Joe told me that she was an easy nine-pounder. I let her swim away, watching in disbelief of the angling feat I had just accomplished.

That was the highlight of my week although every day included equally great encounters. We had one day with terrible weather but that just meant everyone was back early and hanging out together at the lodge. I got to spend a perfect weather day with my good friend Donnie. When I was 12-years-old, I had a fly tying kit and I would tie my own flies to throw in the neighborhood ponds for perch and bass, though I never had a fly rod. Donnie learned of this and bought me my first fly rod. Here we were, twenty years later, chasing bonefish together in the Bahamas. What an impact that kind gesture had on me!

Between both of us that day we lost count of how many fish we caught, including at least ten double hookups. The weather was so perfect that if it wasn’t for the mangroves you wouldn’t be able to tell where the water stopped and the sky started. There was another day where I just struggled to make a decent cast and spooked a bunch of fish. Joe yelled at me all day and I’m pretty sure Robert found more entertainment in that than actually catching fish. We might not have caught the most fish that day but I know we laughed more than anyone else.

One of the things that was incredible to me was the knowledge of some of the guides. Some have been fishing all their life, they know all the tricks and when to use them. One very notable technique was splashing water with the push-pole to spook fish out of the mangroves so we could get a shot at them. Another was watching how the fish reacted to a fly. We had a few bones follow, nosing the fly, but not eating it. The guide reached into the water, grabbed a handful of mud, and rolled the fly around in it. He wanted the scent of the mud bottom on the fly since this is what the shrimp are buried in. We never had another refusal the rest of the day.

I was also impressed with the way the guides set you up with a cast from the bow. One of the coolest feelings is to be facing forward while being poled down a bank and all of the sudden the boat begins to shift left. No words are spoken but that is the sign that there is a fish coming and he is setting you up for a shot at 11 o’clock. They really are a master at their craft!

We spent the last night on the back porch with all of the guides and Frankie the owner and listened to them tell stories from the past. One of the older guys had stories of catching bait for Lefty Kreh before he was fly fishing for bones down there and said that his Dad was one of the first people to show Lefty that they could be caught on the fly. Stories of Crazy Charlie and other fly fishing legends were passed around and that was a night that I will ever forget.

Without a doubt, Andros Bahamas is one of the more beautiful places we have in this world. Words can’t properly describe it. Since I have been back there has not been a night that I don’t lie awake in bed and think about the colors and the lay of the land. My dreams are haunted by the white sand flats with the silhouettes of bonefish slowly making their way toward my fly.