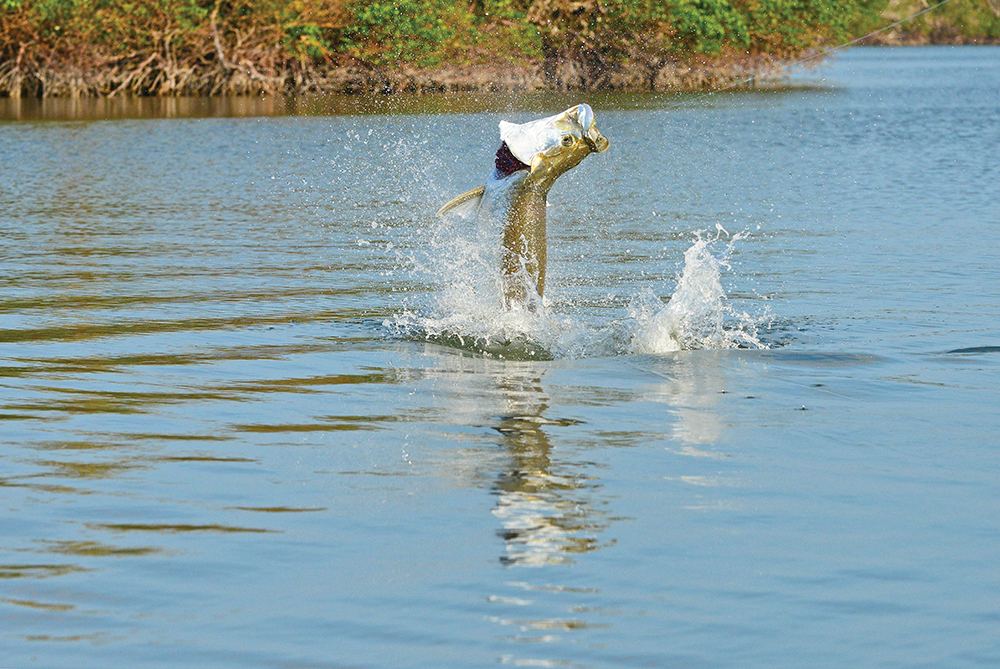 Every now and then, when you do what I do, something really frickin’ cool happens. So, in this month’s column I'm gonna tell a story that I find pretty amazing.

Now, before getting into the story, I need to set the stage. There are certain rules within the guiding community. You will not find them written anywhere but they are nonetheless essential to your success and your reputation.

However, if you and another guide happen to be very good friends, you might sometimes share customers and spots.

Fellow guide and longtime friend, Wright Taylor, and I have such an arrangement as regards a gentleman by name of Fred Kahn. Fred books fishing trips with both of us. And when I refer to Fred as a gentleman I am understating the facts. He is truly a great guy.

On with the story...

So, one day I'm fishing a client in a well-known tarpon hole, call it a “public” spot. Despite the angling pressure the spot receives it still holds a lot of fish. We worked them over pretty good, jumping a couple and boating one. The next day, knowing I was booked for a snook trip, I mentioned to Wright that he might take a look at it, doubting he would, given that it’s such a public fishing spot. All the same, I thought he would like to know.

At the end of the next day, arriving back to the dock and cell phone service, I was feeling proud of our snook success when my phone dinged.

It was from Wright: I think I broke Fred.

I waited several minutes. Dying to know the story I decided to dial Wright.

Turns out – Wright and Fred were fishing that same day and things started off pretty good but shortly went downhill. Not wanting to give up, Wright decided to check the tarpon spot, knowing I was snook fishing and wouldn’t be there.

Upon arrival, it was apparent the fish were still there and very happy. It didn't take long before Fred was hooked up. Boating the fish, Wright was back on the platform and spotted another laid-up fish and Fred's cast landed in the zone. Bingo – tarpon number two was in the air.

This is when things got crazy. Not having been there I cannot tell you for sure what happened. However, as I understand it, Fred had a solid hookup and the tarpon made it onto the reel pretty fast and was heading for the horizon. While a fish is making a long run is the best time to step down from the casting platform, or in Fred's case, misstep.

Kaboom! Fred was on his back in the cockpit of Wright's skiff.

Wright was off the poling platform in a flash to check on Fred and they were both in dismay as they watched Fred's Helios 2 rod and Mako reel skiing across the surface of the water behind a greyhounding tarpon.

Now, if you’re up to speed on fly tackle, you already know that an Orvis Helios 2 is a premium rod with a hefty price tag. But not nearly as pricey as the Mako reel that was attached to it.

Fast forward a couple of days and I am in the same spot but about a half-mile further in. I had just finished telling my customers the Fred story when I saw a high-floating poon. The guy on the bow made a good cast. It followed, ate the fly, and was in the air.

At the end of the fight I was crouched at the port gunwale to land the fish. With the leader in hand I asked if all was good and the client said yes. Wrapping the leader around my gloved hand I gave a good, hard yank. The leader parted and I rose to begin the search for tarpon number two of the day.

But, doing so I noticed something in the water. "You have got to be frickin’ kidding me,” I exclaimed; although frickin’ was not the expletive I chose. LOL!

Taking hold of a Scientific Anglers Grand Slam fly line, the first thing I pulled up was a purple and black tarpon fly and the next was…you guessed it…a nearly $3000 fly outfit.

Piling the mess on the deck, I immediately snapped a photo and sent it via text message to Fred and Wright. The caption read: Laws off international salvage apply here.

"You have to be frickin’ kidding me," Wright replied. But, like me, he didn’t say frickin’. If you didn't already know, fishing guides tend to have sailor's mouths.

So, if this wasn't a cool enough story already, I got a call from Fred asking if I had any open dates before he left to go home. I had one planned and very much needed day off but, considering what had just happened I couldn’t say no.

We met before sunrise three days later and we were off to our first spot of the day. Upon arriving there we found three or four lazily rolling tarpon along a shoreline, so I rigged his “special” outfit with a new leader and fly and started poling.

Shortly after climbing onto the platform I saw a fish roll in a distant, shadowy pocket. It took a while but we got there and I said, "Okay Fred, I have seen a thirty to fifty pounder roll in this corner twice...give me a couple casts up in there. Start on the left side and work right."

"I'm guessing I need to have my eyes checked," I said jokingly.

We both laughed as the Mako screamed, the Helios flexed and the SA line stretched. We leadered the fish and relaxed into the boat knowing that we (Fred, Wright, and I) had just lived one of the coolest stories in the history of fly-fishing.

Now, one final thought. For years I have preached that you get what you are willing to pay for. I am a big fan of Tibor reels, G Loomis rods and Scientific Angler lines. The Tibor and Loomis thing are very personal choices based on quality and reliability but most of all, longtime relationships and friendships.

In regard to the Scientific Angler thing, I have said for years that they are, in my opinion, the most durable fly lines made.

In the story I just told you all, the one thing I omitted was how well the rod, reel, and line held up after being dragged a half-mile through mud and oysters, not to mention having been underwater two days. We never realized how cut up the line was until we landed Fred’s 90 pounder.

And, here’s the takeaway: You simply cannot beat a quality product – no matter what name is on it.