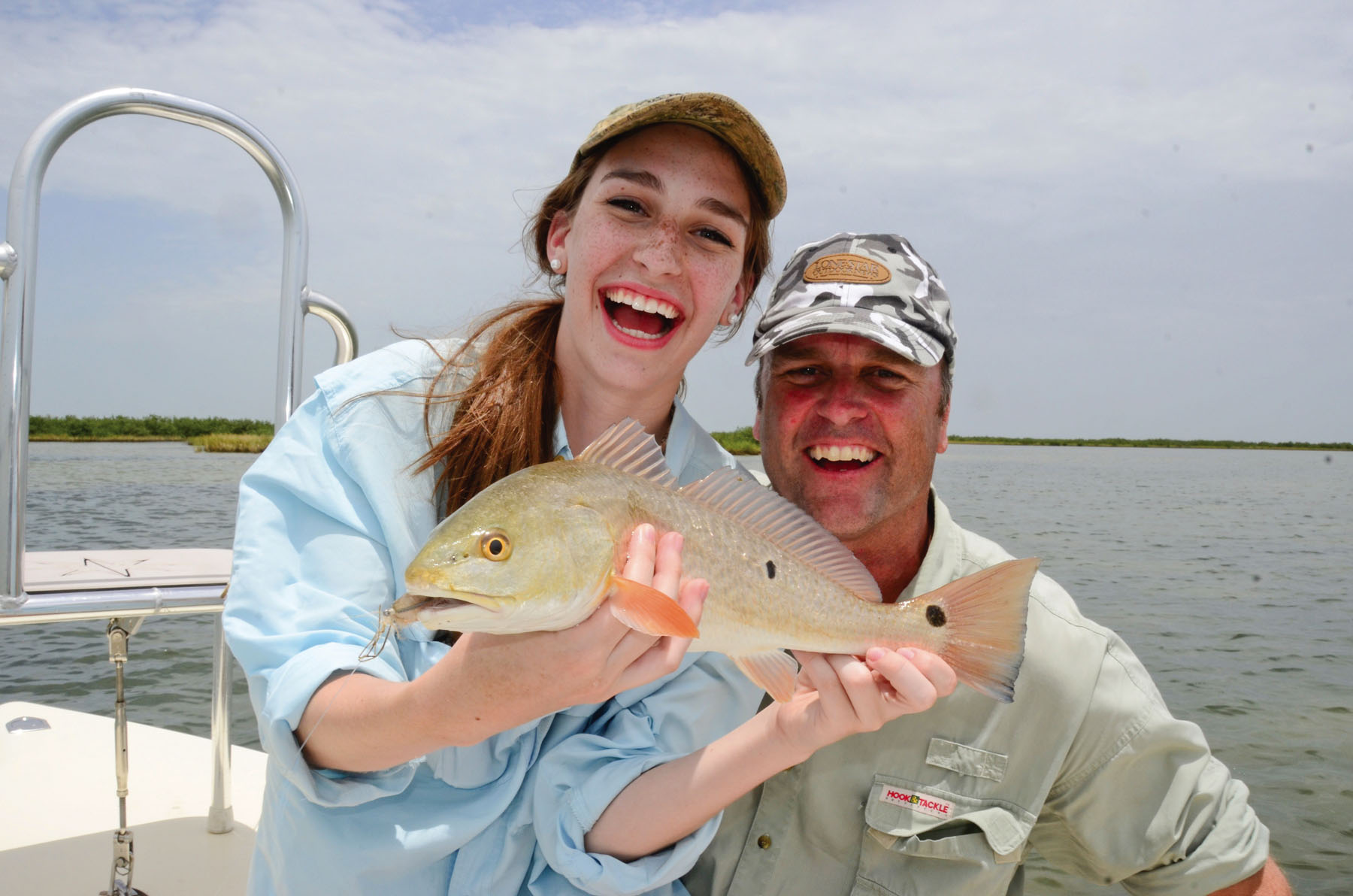 Mimi’s first redfish on fly.
I have said it a thousand times, so I guess this will be number 1001the Good Lord has blessed me with the best friends anyone could ever ask for. Some are friends from my youth but many are people I have met through my career. While looking through my images, trying to come up with a story topic, I kept running through a folder on my desktop that was labeled davidjsams.com, and thought to myself, why not share some of the exploits of me with my dear friend, David J. Sams.

Not only is David one of the first friends I made within the outdoor industry, he has also been a mentor, one of my biggest supporters, and has become one of my dearest friends. For those not familiar, David is one of the finest photographers in the country and the founder of Lone Star Outdoor News, a unique publication dedicated to sharing hunting and fishing news. Incidentally, LSON just celebrated its 10-year anniversary last month. Congratulations to the staff of a great publication.

Anyway, the first time David and I shared a skiff was back in '98. He joined me for a little fishing and a whole lot of picture taking. One of the things I remember most was him talking me into walking across a knee-deep mud flat so that he could make a couple of photos. I was much younger then and it really was not that big of a deal however, when I open his book Engulfed and see that picture I think of my first heart attackthe one that would happen if I tried that again.

There were of course more adventures between '98 and '03 but that is where I will pick up. In August of 2002 I picked up the critter lying next to me on the floor while I am writing. His name is Classic Tequila Sunrise (aka-Sonny) and David could not wait to get him in a duck blind to take some pictures. So in January of '03 Sonny and I loaded up and headed for the Crosstimbers Hunting Club in Comanche County. Sonny was only 6 months old and this was going to be his first duck hunt. The hunt was epic to say the least. Sonny's first hunt yielded ten mallards (nine drakes and a hen) and two pintail drakes. There is still a debate as to who shot the hen. For all intents and purposes, I am the one writing this, so it was David. He will argue the point, but if it is in print then it must be the truth. A year later there was the photo shoot that David was doing for Beretta and then there was the shoot for a Ducks Unlimited book called Generation DUX. Both of those come with a whole other set of stories but I need to save space for fly-fishing.

But let me backtrack a piece to November of 2003. You see, in '03 my side business of outdoor photographer was kicking some serious butt and I got called to do a shoot for a lodge in Belize. I told them I would need money in my budget for an assistant. They agreed and I called my mentor and friend and jokingly asked if he would like to travel to Belize and be my "assistant." I still cannot believe that he agreed but, he did, and I am so glad. In fact, if he had not joined me, I am quite certain that I would not be writing for TSF because I would probably still be in jail in Belize. He ended up being the voice of reason between an art director from NYC and me that was, to say the least, difficult. I am not going to say what I might have done to her had he not been there but hey I am here.

Over the years David and I have spent many days in the field and on the water and not a single one of them have been less than perfect because that is what makes what we do special–sharing the experience with rod and gun with our friends. That is why we are both in the business that we are in.

A few years back David called and said, Mimi (his youngest daughter) and I are coming down for the first-ever Port Bay Club fly fishing tournament and we want you to guide us. Now, a lot of you know how I feel about tournaments, but I am a sucker for his kiddos. Marina (Mimi) and Lili are two of the greatest kiddos ever and I just could not say no.

We fished for fun on the first day and got serious on the second. Mind you, at the time of the tournament the fishing just outright sucked. I had been struggling to get my sports on fish for a week and was nervous. Well we got out there and David stuck the first fish that we came up on and things started looking up. The fact is, whenever David I get together, magic always seems to happen.

It took a little while but we eventually got Mimi her first-ever redfish on fly and then got David another. Unfortunately the fish were not very cooperative that day so we finished with only three. Fortunately it was enough to take home the trophy. Actually I am very excited to have my name on the wall of the very historic Port Bay Club. If you are familiar with it, you will understand why however, I remember telling David and Mimi right after we boated Mimi's red, "It doesn't matter who gets the trophy, we won right here, right now." Nothing is better than guiding an angler to their first (saltwater) fish on fly.

Fast-forward a couple years to Mimi's second redfish on fly. Last year David took Mimi to Africa on safari so we did not have the chance to defend our title. We agreed we would not miss the next. Well we missed it because we were all tied up when it came time for the third-annual Port Bay Club fly tournament so we agreed to get together the first chance we had which, incidentally was two weekends later. Actually, I was very pleased because the tides were going to be perfect for some "big fish" and I could not wait to see the look on Mimi's face when she got a really big fish on fly. Well folks, a picture is worth a thousand words. And, I could not be more proud and excited to be a part of it.

I guess the point of all of the above is to say that fly fishing is the greatest of all pastimes and it not only leads to the greatest of adventures, but also the greatest of friendships. I have met very few people who share the passion for fly-fishing that I have not liked. And, of all of those people, many have become friends. I hope the love of the sport does the same for you all.