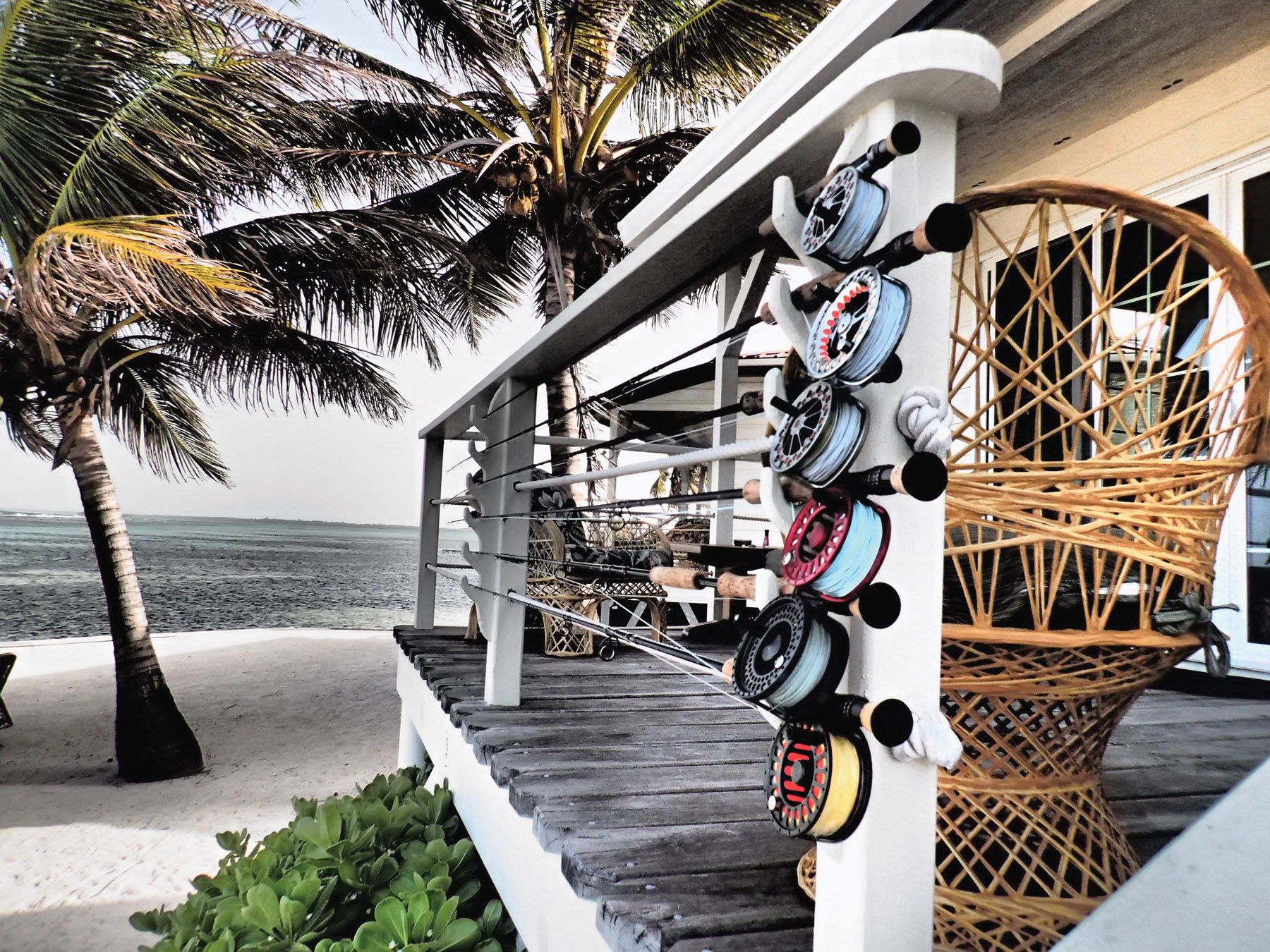 You know you are at a true fishing lodge when there are rod racks built into the porch.

Here it is a month later and my mind is still on Turneffe Island. That place has gotten into my soul and now I find myself daydreaming about being back in paradise most every day. And for the hopelessly addicted sight-caster it really is paradise. Last month I related the trials and tribulations of permit fishing as well as the joy of finally getting a tarpon on the fly. Those are great memories and obviously played a huge part in the enjoyment of the trip, but the kicker had to be the bonefish.

I realize most well-traveled fly guys would rank the tarpon and permit over the bonefish, but ask just a group of fly fisherman who haven't caught any of the three and I bet the bonefish would win in a landslide. Since I was a youngster I always wanted to chase the silver ghosts of the flats. Throughout the years I must've read hundreds of stories about bonefishing in addition to watching countless TV shows with entire episodes devoted to stalking these cool fish. They get a lot of pub.

What I like about bones is they are doable. By that I mean if you do your part, they'll do theirs. By no means am I saying they're easy, but with a reasonable amount of skill you should be able to land one. They sort of remind me of our redfish in that way. It takes patience to get in position to get your shot, it takes some thought to figure out what fly to throw and it takes skill to properly present the fly. Do those three correctly and a bone or redfish will likely eat. The fight may not always be exactly fair, but again you can accomplish the landing with a reasonable amount of skill.

I like doing things I can work at and get good without relying so much on luck. Tarpon on the other hand require a lot of luck. There's definitely skill involved, but luck plays a huge part in getting a good hookset, keeping the lure or fly pinned and not having some form of game-ending equipment failure. Permit? I'm convinced that permit require the stars to be properly aligned, a rabbit's foot in your pocket and a four leaf clover tucked under your hat just to get one to eat. Maybe that's just me, but I don't think so. Tarpon and permit become obsessions that drive you nuts. Redfish and bones are challenging entertainment.

Now on to the fish story. A few weeks before our trip my bride announces that she wants to catch a bonefish on the fly. A worthy goal, but she'd never even attempted to cast a fly rod in the yard much less use one to go fishing. She works at Fishing Tackle Unlimited around some great fly casters and is married to a fly guide, but you can't pick up a decent cast through osmosis. It was agreed that she needed casting lessons. It was also agreed upon that I would not be the one giving said lesson. Those of you who are married understand and those who are not will one day figure it out.

Weeks pass and no lessons are taken. Two days before we depart our good friend Banning Collins with TFO rods comes to town. He just happens to be an awesome casting instructor and a sucker for a good challenge. The lesson starts and I promise to just sit back and watch. Promise broken, I made a comment and got the look. So I did the proper thing and walked away. Thirty minutes later I poked my head around the corner to see my wife rolling out these beautiful casts. They weren't long, but they were solid on technique. Inside of two hours she was casting plenty good enough to go fishing. Awesome.

That was on Thursday, fast forward to Sunday morning. We meet up with our guide for the first morning with six days of fishing ahead. As we're going over what kind of fishing we'd like to do, Camille tells him she's never fly fished and wants to catch a bone on the fly. I'm not sure what was actually going through his mind, but his response was perfect. "We can do that." And off we went. After about a fifteen minute boat ride Daniel slows the skiff to a stop and drops the anchor. Picture in your mind what you think a tropical bonefish flat next to a coral reef dotted with islands of palms should look like. This was better. We donned our wading boots, grabbed the fly rods and slipped into the air-clear water. I dropped back to take a few photos and then caught up just in time for Daniel to point out a huge school of tailing bones. I don't really know what I was expecting for my first encounter, but a hundred or so bonefish happily tailing in a few inches of water was way beyond expectations.

The next thirty minutes was pretty much a blur of excitement, frustration and ultimately satisfaction. There were missed shots, missed bites, break-offs, lines wrapped around coral heads and a few that just simply came unhooked. We were getting a crash course in what not to do and constant coaching from a very patient guide. Then it all came together. A nice school was approaching with the sun in my favor. I waited until they hit an open area free of too much coral. The fly landed perfectly and the take was obvious. A quick strip-set and the bone raced away. This time I managed to hold the rod tip high enough to clear the coral snags and eventually brought him to hand. With the monkey off my back the nice relaxed feeling set in and I started doing more thing right than wrong. Landing that first bone was sweet, but my favorite part of the morning was when I quit fishing and just started watching my wife as she stalked and landed her first fish on the fly. I was proud beyond words that Camille had been casting a fly rod for a grand total of less than three hours and already experienced success. That's way better than the learning curve I went through.

The bonefish at Turneffe Island are typically two to four pounds, a bit on the small side compared with many other popular bonefish destinations. There are however, a good many bigger fish. I had one school of a couple dozen cruise by that were easily six to eight pounds and Daniel's best on the island topped twelve. That's a true trophy in anybody's book. What they lack in size they make up for in numbers and availability. Any time we got tired of endlessly casting for tarpon or were frustrated by permit we could scoot out onto a nearby flat and locate a school or two. Many of these schools easily number over a hundred fish and seldom fewer than thirty. The bonefish population on Turneffe is ridiculous.

There is also something really unique and cool about this fishery, it is the only known location in the world to have golden bones. They are a color variant that shows up on the dark turtle grass as a gleaming gold fish, almost koi-like. They're scarce, but during our stay I was lucky enough to see several including one large school that held three of these beauties. After landing quite a few regular bones I set my sights on the golden prize. Most of them I observed were square in the middle of the tightly-packed schools, almost as though the other fish were protecting them and making it nearly impossible to get a fly in their face. Late one afternoon I got the shot I was waiting for. A large school holding a golden bone was easing past and he was just inside the near edge. The cast was perfect and the take was immediate. I had him. The school raced away and I could trace my line straight to the brightly-colored fleeing fish. Then the school parted. My line went left and the golden went right. The only consolation came in that it was my largest bone of the trip, just the wrong color.

Should you decide to give the bones at Turneffe Flats Lodge (www.tflats.com) a try, I'd suggest bringing along a variety of very small shrimpy-looking flies. Size 8s worked well, but my 6s went pretty much untouched. The lodge had some as small as size 10 that the bones gobbled up consistently. Also go with very lightly-weighted or even non-weighted. Flies with any weight, even bead chain eyes, would quickly hang up in the coral rubble.

Now if you'll excuse me I'm overdue for some tropical daydreaming. I promise I'll get back to some Texas saltwater fishing next month.