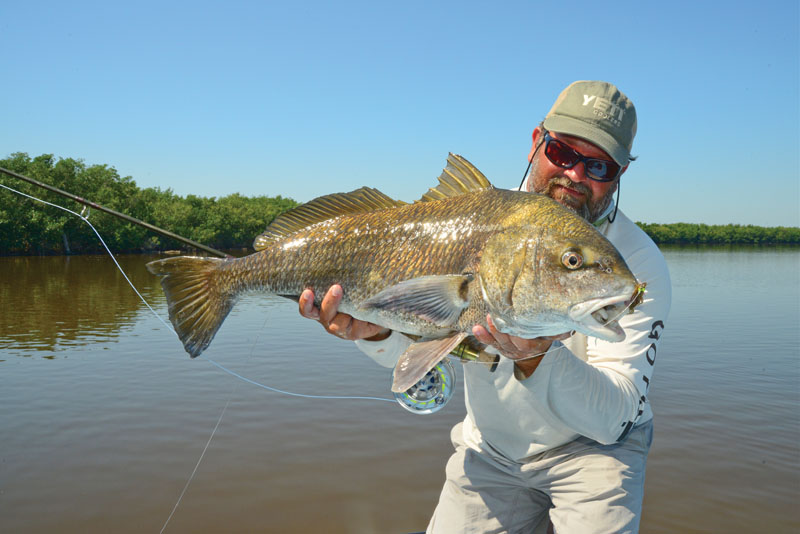 If there is one thing I have learned in nearly two decades of guiding–fly fishermen from the Lone Star State are very hard-headed and, to some extent, a tad more pompous than most. Now before I go further, I have to admit that I had a conversation this morning that went something like this; "Hello Kettle; yeah this is The Pot. You're black."

Yes, this means that I too fall into that "Lone Star state-of-mind." One of the more prevalent subjects that Texans seem to have strong feelings about is whether or not a black drum is worthy of their time. I mean, let's face it–who wants to spend time chasing a fish that is commonly referred to as a "big ugly?"

Believe it or not, I have one customer that will not touch a black drum. When I ask why, his response is, "They're just ugly. And those (chin) whisker things–they just creep me out." It is true, the older and bigger a black drum gets, the nastier looking it gets. But they don't start out that way. In fact, early on in their lives, black drum are referred to in an endearing way and are called puppy drum.

As an angler and a guide, I for one love the smaller drum, if for no other reason than that they can be plentiful and save the day whenever the redfish are scarce. Just the other day we headed out looking for some reds and ended up boating five drum for every redfish that we caught. It turned an okay day of redfishing into a damn great day of fishing.

In regards to the big ugly fish, unlike their younger selves who can be pretty scrappy, they do not always fight very hard. In fact, I had a sport catch a 40-pounder last February that he was able to strip in on an 8-weight. Seriously, the fish never got onto the reel. And, unfortunately, this is the rule rather than exception. But every now and then one will surprise you. One day I was out fishing for some larger drum and decided to use my 10 weight so that I would be able to throw larger crab patterns at them. The first two of three fish caught that day came to hand relatively easily but then I hooked into the third. It was a fish in the low to mid-20s and clearly had identity crises. In short, my knuckles got whacked pretty good when this big ol' ugly fish decided that it was a big beautiful permit instead of slug of a drum. I am quite certain that that fish melted over 100 yards of backing from the reel.

But, really, they do not fight that hard and they are ugly. What else could possibly be wrong with them? Well, could it be when you lift one of these prehistoric beasts from the water that you can sometimes literally watch a couple of decade's worth of mud and algae ooze and bubble from beneath their scales? So again, why would anybody want to catch one?

I'll tell you why. Every now and again one will fight you hard and every now and then one isn't so ugly and nasty. Add to that the fact that they can be very challenging to catch and I know of few anglers that do not like having their photo made with a big fish.

So let's talk about the challenges of catching a black drum on fly–big or small. The first thing to realize is that, unlike their closest cousin, the redfish, black drum rarely feed by sight and this makes them very challenging to feed. Most of the time they are feeding by either smell or feel. Remember the chin whisker things that freaks out that customer of mine. Well a drum will drag those sensitive little barbels along the bottom until they feel something move and then snap it up. Sometimes this movement will be below the sand and mud and the fish will tip up and try to unearth the tasty morsel. When they are "tailing" in this manner is when they are most vulnerable to being duped with a fly.

The trick to fooling them, both big and small, is to be able to cast beyond the fish with a weighted fly and let it sink to the bottom and then slowly strip and drag the fly, attempting to intercept the drum's mouth. Should the fly touch it's whiskers while it is tailing, it is almost certain to get chomped. This method of course works well on a smooth, snag-free bottom however, drum can often be found feeding over oyster beds. When this is the case, you should go to a little bit lighter fly that you can cast beyond the fish and strip it on the surface to directly over it. Once there, immediately stop the retrieve allowing the fly to fall directly down the slope of the fish's head. While I prefer to throw larger crab flies at the bigger drum, one of the best flies, bar none, for a drum of any size is a spoon fly. But remember this, no matter what size fish or what fly, small strips seem to almost always be best for enticing a bite.

Let's face facts. We all need a little love in our lives and the black drum is no different.

Until next month, be good and stuff like that