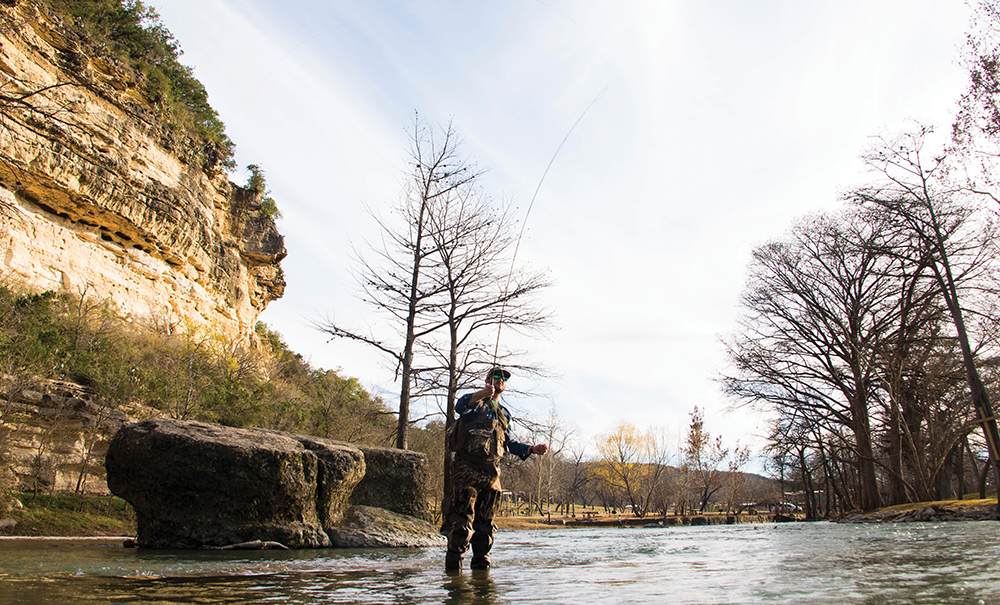 I wish I could start this article with stories about epic days of fishing I’ve enjoyed recently but I cannot. It never fails that your general duties in life will always find a way to catch up to you. No matter how hard I hope and pray it seems that it can’t always be fun and games. Between work and chores, I have only had time to make two trips to Sabine Lake and neither of them were anything to brag about.

However, I did have a weekend blocked off on my calendar for a trip to fish the Guadalupe River. If you did not know, Texas Parks and Wildlife, along with Trout Unlimited, stock the upper part of the river with rainbow and brown trout. The cooler wintertime water temperatures provide a suitable habitat for the trout and they do quite well in the river. So our plan was to launch the kayaks, float down the river, and get out around the rapids to try our luck. Most anglers on the river use fly gear for these trout, which was going to be relatively new to me.

When it comes to fly fishing for rainbow trout, the only experience I’ve had was on the Colorado River in Arizona last year. Luckily, my guide was a great teacher and I learned a little more than the basics. On top of that, the buddy I was going with used to spend summers fly fishing with his granddad on the Snake River in Idaho. Prior to this, the only experience on the Guadalupe we have had is probably the same as every other Texan – sitting in a tube and floating downstream on a hot summer day. But, between us, we had enough knowledge to be about half a step above winging it.

We arrived to New Braunfels mid-morning and discussed on the drive up that we were going to launch at the Canyon Lake Dam. We gathered our gear and headed down below to assemble everything at the water’s edge. After tying on flies we were ready to make our way downriver. We started off throwing a basic nymph rig which consists of a small nymph fly with a strike indicator (small cork) about 2’ above the first fly. From that fly, I fashioned a trailer rig with a fly about 16”-18” down, and then another heavier fly below that one. Three flies in a series topped with a strike indicator.

As we pushed away from the bank we caught ourselves just floating down the river and taking in the scenery. It is not often that anglers on the coast can go fishing and actually have a chance to hear nothing but nature – no boats, no refineries, no passing cars. Only thing that we heard was the sound of rushing water from the falls, the whining of wood ducks, and the subtle quacks from mallards swimming along the banks. On top of that, we were shrouded in large, overhanging cypress trees, and towering above these were the white limestone cliffs of the Texas Hill Country. Needless to say, we were captivated before we even started to fish.

Floating down a good ways, we ran into a good set of rapids and decided to hop out of the kayaks and give it a shot. We fished it for an hour or so with no luck. We continued to move down the river and repeated the process several times with the same results. Around 4:00pm we paddled to the dock of the house we had rented and decided we’d call it a day and start fresh the next morning. We spent the evening grilling by the river and topped it off with a concert at Gruene Hall later that evening.

The next morning before launching, we decided to head up the road to a local fly shop that our host had suggested we visit. We went to ReelFly fly fishing shop and guide service and it was probably the best move we made all weekend. The staff there were incredibly friendly, very knowledgeable of the river and everything that was happening on it. They pointed us to a few flies that have been producing lately and, after explaining what we were doing, they assured us we were on the right path to land a few fish.

We headed back to our rental house, jumped in the kayaks and headed downstream with great expectations. Not far below we found a set of rapids and decided we’d start there. We spread out and fished our fair share of this section of the river. After a few hours, we decided to head down to the next set and we ran into another small group of anglers that were experiencing the same slow luck. At this point we decided to swap our nymph flies for an egg pattern. We moved a little further downriver from the other group and still no luck. After it was all said and done, my buddy Jake pulled the hook on a feisty trout and that was the only bite we had all day.

While the fishing may have been disappointingly slow we never once got discouraged. That would be a hard thing to do when you’re in this kind of setting. We headed back to the house and racked our brains for what me might do differently the next day. Both of us being avid anglers, we knew that we had to have passed over lots of fish, but there had to be a reason why they would not eat. Our only thought was that we may not have been fishing deep enough and our bottom flies were not getting low enough into the water column. So that night we added a little more weight and prayed it would do the trick.

The next morning we made the same drift and come across an angler who was hooked up – a promising sign. Jake got a strike after about 30 minutes but wasn’t quite quick enough to get a hookset. After another hour or so, we decided to head down to the next set of rapids since the river was becoming rather busy and we were becoming surrounded by other anglers.

We got out as we typically do and went separate ways. I made my way upriver to a small set of falls with the feeling that there must surely be some trout lying in the eddy. After a few poor casts I finally make a good one and, sure enough, fish on. I pulled him out of the rapids and chased him around for a minute before I could get a grip on him. As I looked around there was nobody close enough to help make a photo so I decided to release him before keeping him out of the water too long. At least we’d finally landed a fish!

We eventually met back at the kayaks and I learned that Jake had pulled the hook on another fish and witnessed another angler lose his personal best trout at the net. At least the last day was a little more productive for us and the other anglers on the water. We ended the last night with a fire, a few cold beverages, and discussing our personal theories of these river fish.

After chasing these trout, I have become intrigued with them and their habits, and it raises a lot of questions for me. I know I can’t just go out in one weekend and have it mastered, but I dang sure want to learn it. Not only are the fish appealing but how you catch them is equally appealing as well – everything needs to be nearly perfect. On top of that, the river and surrounding scenery is nothing short of awesome. I am counting down the days to when I can go back and learn more about this great Texas fishery!