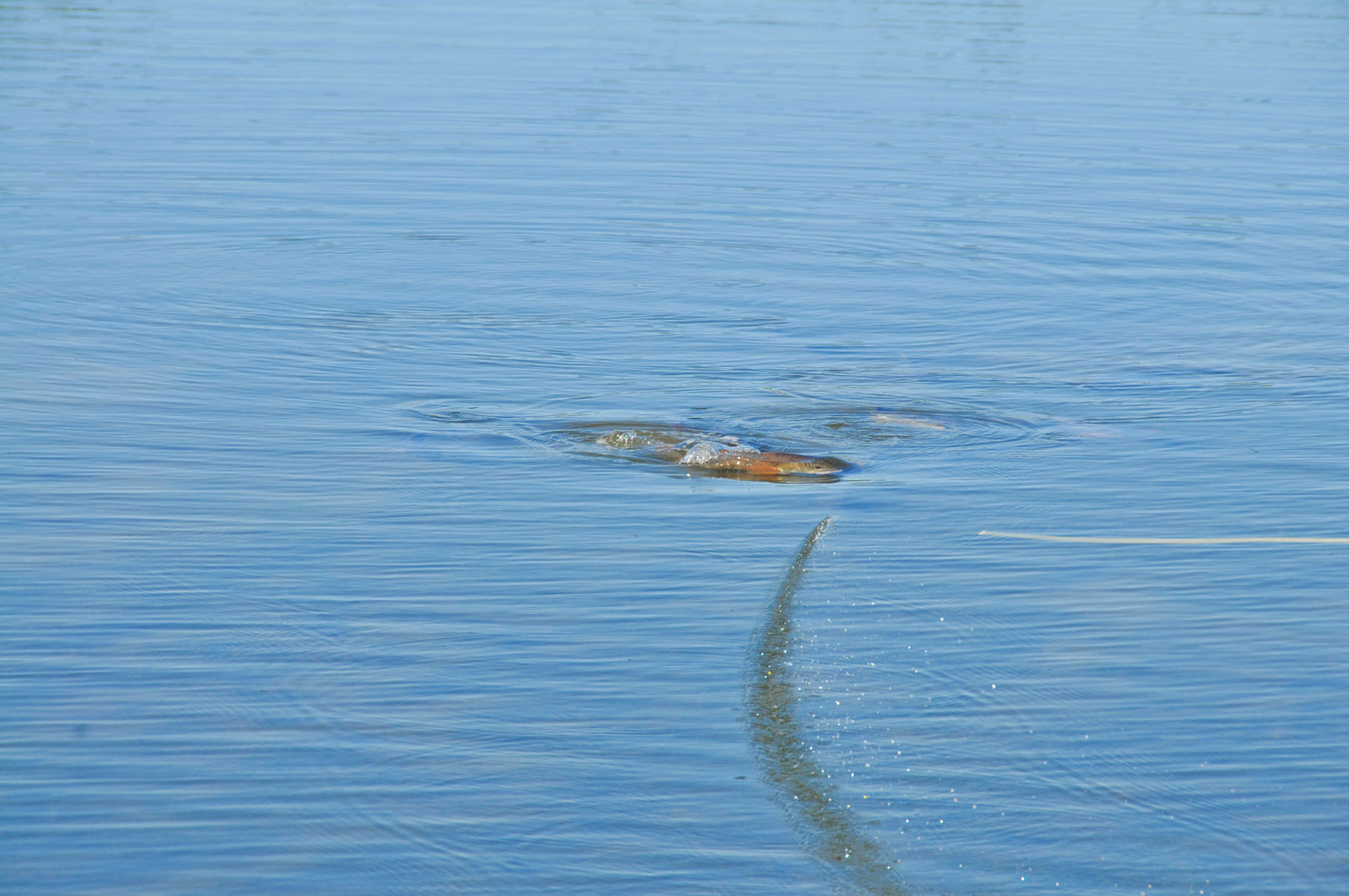 A finicky red comes tight on the line.

There are of course many factors that come to play out on the flats and they change daily. Whether talking weak tides or currents, changing light or the type and availability of a food source, all can come into play when choosing the right fly and how to fish it in such a manner that the fish will commit to eating it. The long and short of it - sometimes you have to make a fish eat.

Fly Placement and Retrieve
When I encounter fish that are unwilling to eat, the first thing I try to figure out is; Did the fish actually see the fly? It is really easy to figure this out if the fish eats or spooks from the fly but not if they seem to ignore it. When this happens, I tend to get a little more aggressive with my cast by shortening my lead right up until the point that I am trying to drop it right into their wheelhouse (on their nose) to trigger a reaction strike. I have seen this method work on numerous species of fish, especially snook, redfish, sea-trout and even the occasional tarpon that are stationed in an ambush type scenario.

Years ago, while fishing for some back-country snook in the glades, my friend Timmy Borski said to me, The important thing is to put the fly on the plate, then it is time to think about the retrieve.

The plate he refers to can vary in size and is determined by the depth of water that the fish are feeding in meaning that it is larger in deeper water and smaller in shallower water. He explained further that the deeper the water the faster the retrieve can be. The key is to have the fly move in front of the fish. If this is not getting the fishes attention, then it is time to put the fly in the fish's wheelhouse as I describe earlier but Borski described his method by saying, In deeper water, to get the fly in a fish's wheelhouse, you cant drop it on their head. It is important to do the math before making the cast and then have the fly intercept as close to, but still in front of the fish. He also added, Once the fly is on the plate, it is important to tailor the retrieve to stay on top of it.

No matter what species of fish an angler is pursuing, one of the most important aspects of deciding where the fly needs to be placed and how to vary the retrieve is experience. Seeing fish react to different presentations over and over will help anglers decide if the fly is in the magic zone or, if it needs to be represented in a bolder fashion. In other words- go fishing more often and it will be easier to learn how to place and retrieve the fly in such a manner as to entice the most finicky of fish.

Choosing the Right Fly
Most of the time, choosing the right fly is as simple as matching the hatch. For example, you pull up on a sand flat in Texas and the fish are tight to the shore cruising with their backs barely covered by the water. The fish are feeding actively as you witness them dart in and out of the spartina grass chasing small shrimp that are two to three inches long. It is a no-brainer, tie on a similar sized shrimp-like fly in natural tan color and get after it and catch a couple of fish. But, what if you were to pull up to the same flat and the fish were holding in potholes in about a foot of water sitting perfectly still? You make a couple of well-placed casts and the fish either follows the same fly you would have used in the previous scenario or worse yet, ignores it completely. Now it is time to get creative.

The first thing that I do when choosing a fly to feed a finicky fish is to go to a fly that really moves. By this I mean a fly that will literally move all on its own. The finest example yet, is the Toad. The toad, as many of you know, made its name by feeding the very persnickety tarpon of the Florida Keys. Many attribute its appeal to the Toads very slow sink-rate and the ability of its marabou tail to breath in the current or with the absolute most subtle twitch of the rod tip.

But, the Toad and all of its variations, can be tied to represent either a shrimp or a crab depending on what kind of tail is incorporated and how narrow the body is trimmed and can be used to fool almost any fish that swims in tropic or sub-tropic climates. I have seen tarpon, snook, redfish, sea-trout, snappers, grouper and cobia all fall victim to the enticing motion of a Toad. The motion can sometimes be the difference between feeding a fish and watching one swim off.

The key to getting a fly to breath or undulate is achieved at the fly tying bench. It is important to have a material in the fly that is soft, subtle and tied into the fly in an unrestricted fashion. This is easily figured out by picking up a fly and moving it around. If the gravity and the air passing by it make the materials move and flop about, then it most likely is going to look twice as good in the water.

One of my favorite flies for less than cooperative redfish, snook and sea-trout is a variation of Mr. Bob Clousers famed fly. What I like to do is build a Clouser with the lightest of bead-chain eyes and a liberal extension of ostrich hurl between the wing and collar. This fly, when attached to a leader with a clinch-knot (no loops) can be suspended in front a fish and wiggled in a very enticing manner. This particular fly was given the name, the Spar-Tina Turner by legendary angler, Flip Pallot after a day of coaxing shrimp-crazed redfish out of the spartina grass shorelines of the Texas coast.

So what if movement is not the key, the next thing I like to look at is the amount of flash a fly has. On many occasions, I have watched fish repeatedly refuse or spook from flies with too much flash or just flash period. Sometimes it is as simple as pulling the flash from the fly or if there is just too much to remove completely, just change the fly. I would say it safe to say that the majority of the flies in my boat have very little to no flash at all.

Borski tends to agree with me on this point but has even more to offer. All the flash that any fly needs is to incorporate just a little black into the pattern.

So, movement has not enticed a fish and the removal of the flash has not done the trick. What is next? Well this is the point in which I like to down-size my patterns. I will start going smaller and smaller until I find something that works. This is something that I consider with just about any species of fish because I believe the smaller the pattern, the fewer details there are for the fish to notice and not like. There are advantages and disadvantages to taking this approach, mostly stemming from the species that is being pursued. Look at it this way, you might serve a whole chicken, some rice and some peas on a platter but what if you are only going to serve a drumstick or even just a pea? Well, to steal the analogy from Borski, the plate just got smaller.

Downsizing to catch fish is not a new concept. Just look at the overall trend in the size of flies used for Florida Keys tarpon. Twenty-five years ago, tarpon flies were tied on 3/0 and 4/0 hooks whereas nowadays a 1/0 is more the norm. Heck, there are some that will even go down to a tiny #1 if the fish are being especially punky.

When working through the equation of picking the right fly, color is always the first and last thing to consider. By this I mean, I almost always go with a natural color first and the last thing I do is go to some wild and crazy color combo that appears to be out of place on the flats or backcountry. As for what crazy colors- well I will just leave that to your imagination because I have no idea why fish like hot pink and purple.

So, next time you are on fish and cannot make them eat, rather than running to the next spot- you might try experimenting with some different flies and retrieves.